What is Indian Snakeroot?

If you’ve ever been wandering in the Indian subcontinent or other parts of Southeast Asia and spied a small burst of tiny red flowers, you very well may be looking at Indian snakeroot, one of the snakeroot varieties bearing Rauvolfia serpentina as its scientific name. There are numerous types of snakeroot throughout the world, with varying properties, but most of the fundamental benefits are the same. It has been used in traditional medicine for the better part of two millennia and has been historically linked to ancient Rome, Persia, China, and India. Although it is native to the Asian continent, its powerful effects have made it popular in several parts of the world. [1]

The part of Indian snakeroot that is used, as the name implies, is the root, which can be chewed, dried, powdered, and consumed in that way. Chewing is the most traditional form of consumption and is still widely practiced. Now, let’s take a closer look at some of the important health benefits of Indian snakeroot. [2] 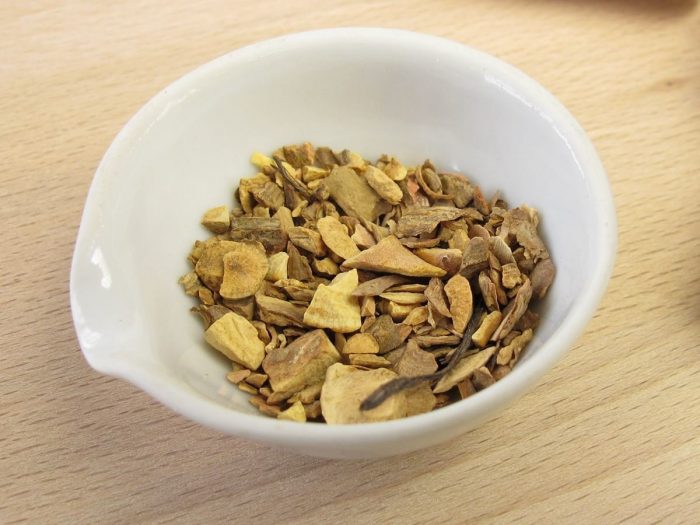 Health benefits of Indian snakeroot include:

One of the most important benefits of Indian snakeroot in the modern world is for general heart health. Chewing on this root can effectively lower blood pressure by dilating the blood vessels and relieving strain on the heart. This can help to prevent conditions like atherosclerosis, heart attacks, and strokes. Like many other benefits of Indian snakeroot, the exact chemical pathway isn’t completely understood, but the benefits are clear. [3]

For people who suffer from chronic anxiety or stress, chewing on the root of Indian snakeroot can quickly soothe your mind and eliminate whatever has been clouding your attention. It has a hormonal impact on the body that can rebalance your mood and pull you out of mild to moderate depression. Some people even regularly chew this root as a type of mild sedative or drug. [4]

As the term “sedative” above implies, Indian snakeroot is very good at relaxing the body and inducing calm, uninterrupted sleep. For people suffering from insomnia, restlessness, or general fatigue, it can provide deep, invigorating sleep and a clear head in the morning.

For thousands of years, Indian snakeroot has been used as an effective remedy for gastrointestinal distress, for both diarrhea and constipation. Essentially, it cleans out your stomach and promotes normal functioning of that organ system, primarily due to its relaxing effect, which can get your bowels flowing naturally again. [5]

This particular effect of Indian snakeroot has been known for millennia and is the reason why this root has been used against insect bites, snake venom, and any other type of inflamed wound or body part for any herbal practitioners. It can effectively neutralize the toxins of various bites and venoms, while also reducing the inflammation and pain of the affected area. This also makes it an effective remedy for people suffering from arthritis, as well as tendinitis and gout. Finally, Indian snakeroot is used to break or reduce fevers, promoting rapid healing following an illness. [6]

For women who regularly suffer through difficult periods, Indian snakeroot can be a simple solution. Not only is it an emmenagogue, meaning that it induces menstruation, but it also has anti-inflammatory and mood-modulating effects that can eliminate the depression, cramps, bloating, and mood swings that can commonly occur in conjunction with menstruation.

Word of Caution: Although some people take Indian snakeroot regularly, it can be toxic when consumed in large quantities. Side effects of excessive use, due to powerful chemicals present like reserpine, include nausea, vomiting, nasal congestion, and loss of appetite. Before you begin chewing on Indian snakeroot, speak to a trained herbalist or your medical practitioner to ensure that you’re a good candidate and are receiving a properly prepared herb. [7]

Rate this article
Average rating 4.0 out of 5.0 based on 84 user(s).
Read This Next:
Popular Articles