The most important health benefits of Japanese knotweed may include its ability to prevent and treat cognitive disorders, improve heart health, lower your risk of cancer, reduce gastrointestinal distress, lower blood pressure, maintain proper insulin levels, and many other unique benefits.

What is Japanese Knotweed?

Japanese knotweed has been used as a spring vegetable for centuries in Asian cultures and is used for various agricultural and bee-keeping activities. The plant is so highly praised because of its high content of one particular chemical, resveratrol. Studies have shown that the roots of the plant contain a much higher level of resveratrol than the leaves and the stems. [1] [2]

Japanese knotweed is native to East Asia, primarily Japan, Korea, and China, and is scientifically known as Fallopia japonica. It is a large, perennial herbaceous plant that has become an important cultural, medicinal, culinary, and ceremonial herb for a number of Asian cultures over the centuries. In other countries of the world, Japanese knotweed is sometimes considered invasive, as it is quite hardy and can grow quickly; it can also be found in North America and Europe, as well as in limited amounts in Australia. In certain countries and regions, billions of dollars have been spent trying to control the outbreaks of Japanese knotweed, as it can easily overtake other crops and vegetation. [3] 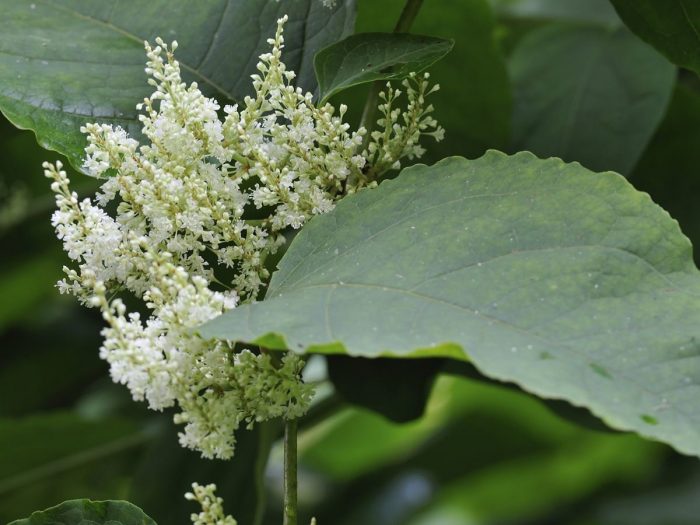 Knotweed is an herb used for cough, cold, and many respiratory disorders. Photo Credit: Shutterstock

Health benefits of Japanese knotweed include:

One of the most well known and widely relied on benefits of Japanese knotweed may be its apparent effect on cognitive disorders, like Alzheimer’s disease and dementia. This may be primarily due to the resveratrol content of the herb, which is the same for most of the plant’s benefits. Resveratrol has shown a measurable preventative effect against neurodegenerative processes that can affect neural pathways (RS Turner et al., 2015). Just as antioxidants can eliminate plaque and neutralize free radicals that can slow mental function and cause deterioration, resveratrol may help keep brain pathways energized and in use, preventing those tragic conditions. [4]

When one consumes high-fat, rich foods, there is a much greater chance of developing heart disease and cardiovascular complications, such as high cholesterol. However, the resveratrol content in Japanese knotweed may have been known to counter that. In France, where red wine is drunk in high concentrations (and thus, large amounts of resveratrol are consumed), heart conditions may potentially be very uncommon, despite the high-fat and rich diet that many people enjoy there. By adding knotweed to your diet, you may benefit from the same heart-protective qualities! [5]

Early research on resveratrol’s effect on the heart primarily centered on a reduction in fat, there may have also been encouraging results regarding resveratrol’s ability to modulate blood pressure. By reducing strain and stress on the heart, lower blood pressure may significantly lower the risk of heart attacks and strokes by keeping the arteries and blood vessels dilated, preventing blood clots. [6]

May Provide Relief From Gastrointestinal Concerns

If you are suffering from stomach issues, such as constipation, bloating, cramps, inflammation, or chronic pain, Japanese knotweed may be just what the alternative medical practitioner ordered! By adding resveratrol-rich herbs to your diet, you might significantly reduce gastrointestinal distress, and the herb may also act as a mild laxative, which can help clear out your system and get your digestive processes back to normal. [7]

May Aid In Cancer Management

Any herb that has anti-cancer potential tends to get a lot of attention, and Japanese knotweed might not be an exception. A 2014 research conducted by Dr. Chandra K. Singh from the Department of Dermatology, University of Wisconsin, Madison suggested that resveratrol-containing foods like raspberries, mulberries, and Japanese knotweed may have been shown to afford chemopreventive as well as therapeutic effects against certain cancers. In this study, the researchers tried to gain clarity on how resveratrol-based combinations might help in cancer management and the results, though not clear enough, look promising. [8]

May Help In Insulin Control

Over time, particularly if we have a poor diet, our body becomes less able to regulate its insulin levels, and may develop “insulin resistance”. This can lead to diabetes and many other health complications, but if you add Japanese knotweed to your diet, you can effectively avoid all of that. The resveratrol in Japanese knotweed might help decrease insulin resistance while improving insulin sensitivity, helping in blood sugar regulation. [9]

Word of Caution: Taking an excessive amount of Japanese knotweed can result in negative reactions, but if you follow the dosage guidelines and use the herb in moderation, the chances of an allergic reaction are small. If you are allergic to resveratrol, which some people are, you should avoid any use of this herb.

Rate this article
Average rating 3.9 out of 5.0 based on 288 user(s).
Read This Next:
Popular Articles