What is Red Trillium?

Red trillium is a flowering plant known for its many medicinal properties. Depending on where you are in the world, you may know this plant by other names, including wake robin, Beth root, birthroot, or even Stinking Benjamin. The scientific name of this herbaceous perennial, however, is Trillium erectum. [1]

The physical appearance of the plant is quite striking, as it has a large, thick stalk with a red or white flower at the top, above broad three-pointed leaves.

The smell of the plant is also quite unusual, and can only be compared to rotting meat, hence some of its other colloquial names. 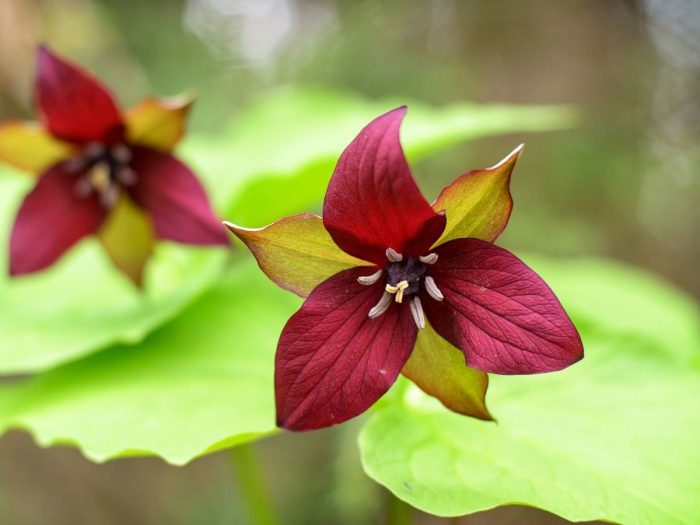 Now, let’s take a more detailed look at all the health benefits of Red trillium.

Red trillium has long been used to relieve respiratory distress, specifically because it acts as an expectorant, helping to remove phlegm or mucus from the respiratory tracts. This can help to speed up the healing process of colds and also protect the immune system against the pathogens that often thrive in mucus. [3]

This powerful herb is known to be an emmenagogue, meaning that it stimulates menstruation. For women who suffer from particularly painful menstrual cramps or symptoms, red trillium can be a wonderful remedy to soothe the body and prevent spasms and cramps. [4]

This plant also has certain antiseptic qualities, which is useful when used as a topical solution. In that case, red trillium can be made into a paste, either through crushed leaves, or boiled/dried root, and then spread directly on an affected area. For a wound or abrasion, it can help to prevent any infection from developing. It similarly clears out our gastrointestinal system of dangerous parasites and bacteria that can make us ill. [5]

Although the research is still very new in this particular area, early results show that red trillium can have an effect on tumor growth and metastasis, making this an invaluable alternative remedy for people suffering from various forms of cancer. [6]

Japanese researchers have also found in a study that some underground parts of red trillium show cytotoxic activity against human leukemia cells. [7]

Be sure to discuss the possible use of red trillium with a doctor before combining this approach with any other formal treatments.

While this plant can be slightly dangerous for pregnant women early in their term, as it can induce menstruation, it is very effective for stimulating childbirth, which is why it has the secondary common name of “birthroot”. If you are struggling through exceptionally painful labor, ret trillium can help to stimulate childbirth and ease the process by providing natural pain relief. [8]

Topical application of a paste or salve made with red trillium to the affected area can quickly reduce inflammation and heal the bruises. By stimulating blood flow to the area, it can induce more rapid healing, while removing the pain and severity of the wounds due to its various antioxidant and analgesic properties.

One of the earliest uses of red trillium was to cure stomach upset and diarrhea. To this day, this remains a popular use of the herb, and while dysentery isn’t nearly as common as it was when this herb first came to popularity, those suffering from IBS and other gastrointestinal issues can still derive a lot of relief from this surprisingly powerful herb. [9]

Word of Caution: As mentioned above, pregnant women should refrain from using red trillium, as it can induce premature labor. Also, some people with sensitive skin can develop a rash when topically using red trillium. Always consult a medical professional before adding a herbal remedy to your regimen, and be sure to closely monitor your body for any unexpected side effects.

Rate this article
Average rating 3.4 out of 5.0 based on 20 user(s).
Read This Next:
Popular Articles