Some of the most impressive health benefits of white horehound include its ability to protect the immune system, acts as an anticancer agent, help manage diabetes, boost heart health, soothe inflammation, eliminate indigestion and gastrointestinal distress, detoxifies the body, and eliminates spasms.

What is White Horehound?

White horehound is the common name of Marrubium vulgare [1], a small flowering perennial plant that looks a great deal like mint and is a part of the same family. It also boasts many of the same health benefits as other members of the family, making it an important plant in some traditional medicinal practices. The plant is relatively small, not growing higher than 18 inches, with small leaves covered in small hairs. The flowers of this plant are white and can also be used, along with the leaves, in the extraction of essential oils. This plant has both medicinal and culinary uses, although they are closely connected. For example, it can be used to make throat lozenges or candies, which are used to soothe sore throats. Horehound beer and tea have also been popularized in some parts of the world. 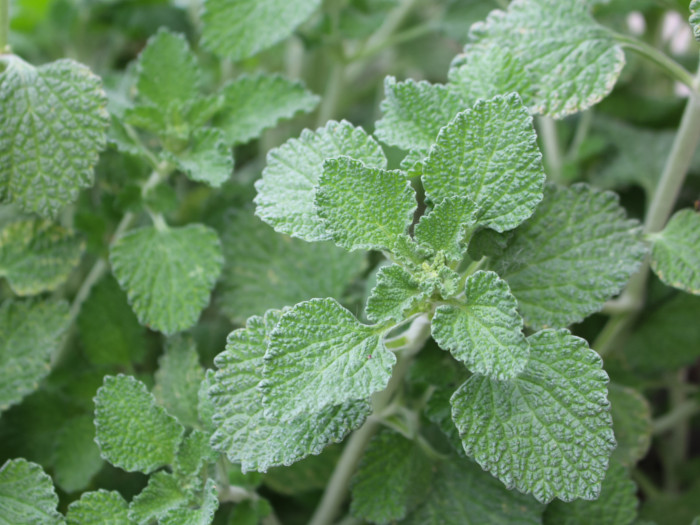 Other than its minty flavor, the horehound plant also has medicinal properties. Photo Credit: Shutterstock

The plant grows rapidly and is known as an invasive weed in certain parts of the world, but its benefits far outweigh its encroaching behavior. The plant is native to Europe and parts of Asia, but it has spread widely around the world and can be found throughout the Americas. The mixture of unique organic compounds in white horehound oil makes the plant very powerful, and quite popular with herbalists and alternative medicine users. Most notably, marrubiin, one of the volatile components of white horehound, has impressive effects on diabetes, and several other health issues. Now, let’s take a closer look at these health benefits or white horehound. [2]

Health benefits of white horehound include:

The white horehound plant is rich in apigenin, a flavonoid which has been found to have anticancer properties. According to a 2006 study published in the [3]Oncology Reports [4] journal, the anti-proliferative activities of this plant, especially in the case of colorectal cancer, can be attributed to the presence of siterpenoids such as marrubiin and marrubenol.

The number of flavonoids in this plant may also lend it hepatoprotective properties, as suggested by a 2015 animal study published in the [5]Canadian Journal of Physiology and Pharmacology.

While the existing research might point towards the anticancer potential of the Marrubium vulgare, more large scale clinical studies are required to support the benefit.

There are several ways in which white horehound can be consumed or applied to gain its health benefits, including topical mixtures and oral consumption. For inflammation issues, it can do everything from improving symptoms of arthritis to relieve sore throat and coughing, which is often the result of irritation in the respiratory tract. Furthermore, white horehound has been connected with reducing constriction in blood vessels, and by lowering this inflammation, can actually improve heart health by helping to reduce blood pressure. [6]

Along with lowering overall cholesterol, white horehound has also been closely linked to a reduction in blood sugar levels. Essentially, researchers have shown that when horehound has been introduced to the system, the body is better able to handle large influxes of glucose, without flooding the body with it, resulting in the common sugar rush and crash. Instead, by keeping blood sugar levels in a normal range, white horehound presents a solution for diabetics who are so heavily impacted by blood sugar fluctuations, as per a research published in the journal Fitoterapia. [8] [9]

One of the less well-known benefits of white horehound is its ability to induce sweating in those who consume it. This is useful for various reasons. If you are ill, “breaking” a fever is often the first step to recovery. Also, sweating can eliminate toxins in the body, as well as excess salts, water, fats, and dangerous substances that can cause illness. [10]

One of the oldest uses of white horehound is as an antispasmodic. If you suffer from seizures, muscle twitches, cramps, or other spasm-related conditions, white horehound can soothe the nervous system and prevent the onset of these attacks. This relaxing nature of the herb has made it popular as a tea, as it can calm the body and mind. [11]

For women who experience painful menstruation, white horehound can be an effective solution. Many women use the herb to reduce the pain of intense cramps, again due to the soothing nature of its organic compounds. It is also said to help mood swings. These hormonal effects are due to the powerful active ingredients in horehound extract. [12]

Along with all the other impressive benefits of white horehound, it is also very good at eliminating issues in the gut, namely constipation, and indigestion. The anti-inflammatory powers of the herb combine with natural antiseptic qualities to clean up the gastrointestinal tract and improve its function. By eliminating inflammation in the colon, you can prevent constipation, excess bloating and flatulence, and even hemorrhoids. [13]

White horehound has certain antibiotic and antimicrobial properties that make it a natural wellness booster. By protecting the immune system from pathogens and foreign agents, white horehound can reduce the stress on your immune system and keep it prepared for more important health concerns. White horehound is commonly found in candies, mouthwashes, and toothpaste for this very reason. [14]

Although this is a very beneficial herb for generations of alternative medicine practitioners and users, there are a few health concerns. If taken in excess, the effects that white horehound has on the heart can intensify to a dangerous level, and even cause abnormalities and arrhythmias. Also, for those with ulcers or serious stomach issues, white horehound can exacerbate the symptoms. Also, pregnant and breastfeeding mothers should not consume horehound, as the powerful blend of chemicals and compounds could be potentially dangerous for infants.

Rate this article
Average rating 3.9 out of 5.0 based on 126 user(s).
Read This Next:
Popular Articles