What is Borage Oil?

Borage oil is made from a wildflower of the same name, although it is often called starflower. Scientifically known as Borago officinalis, this flower is native to the Mediterranean region, although its products are now available in many different parts of the world. This flower is praised for its seeds, which are composed of roughly 25% borage oil. [1]

Borage oil is the richest known source of gamma-linolenic acid (also known as GLA), an extremely beneficial fatty acid, in addition to significant amounts of stearic acid, eicosenoic acid, palmitic acid, nervonic acid, erucic acid, and other antioxidants. As one of the most nutrient-dense oils on the market, it is highly sought after for its medicinal applications, and new research is ongoing for potential uses for this uniquely powerful oil.

Many people choose to use borage oil if they are struggling with stress, skin inflammation, painful menstruation, diabetes, high blood pressure, obesity, high toxicity, ADHD, flu, cough, congestion, chronic pain, anxiety, and oxidative stress, as well as those who are looking to lower their chances of cancer.

The monounsaturated and polyunsaturated fats in borage oil can have antioxidant effects on the body, helping relieve inflammation and oxidative stress, thus lowering the risk of chronic disease, and even helping fend off cancerous growth. [2]

Various studies have been conducted to determine the effect of borage and its oil on cancer. A 2013 research paper suggests that a diet that consists of borage oil is beneficial as this oil contains gamma-linolenic acid (GLA). GLA helps to protect you from DNA damage and also has the ability to fight cancer. [3] [4] 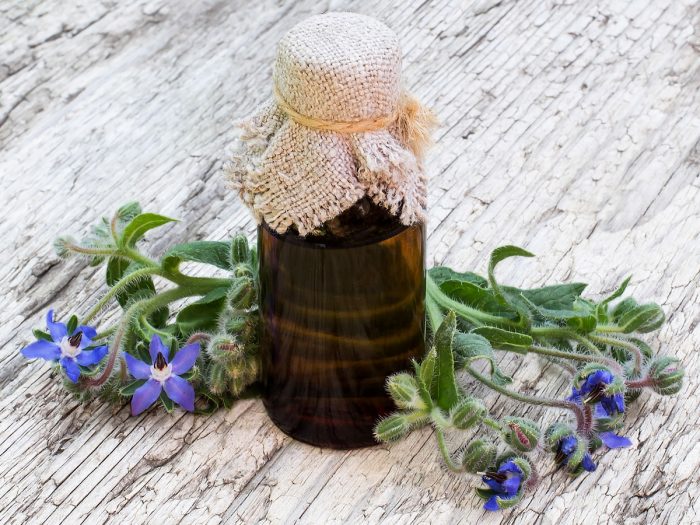 The mucilage found in borage oil is able to effectively eliminate respiratory issues, including infections and congestion. It can cut through the phlegm and mucus, while also attacking the underlying infection and soothing sore throats and respiratory tracts. [5]

Pain relief is commonly associated with the use of borage oil, particularly for breast pain, chronic pain, and soreness associated with injuries or surgeries. By stimulating the release of certain hormones, and impacting the pain receptors in the body, this oil can ease tension and relieve even chronic pain conditions.

Omega-6 fatty acids, which are found in high levels in borage oil, are able to control prostaglandin production, which regulates inflammation throughout the body. Gamma-linolenic acid is also directly linked to lubricating the joints, making it an ideal remedy for those suffering from rheumatoid arthritis. [6]

With a huge range of fatty acids and the highest known level of gamma-linolenic acid, this oil is extremely good for heart health. It is an anticoagulant and a hypotensive substance and helps in balancing cholesterol levels as well. Thus it protects against atherosclerosis, heart attacks, and strokes. [7]

When you apply borage oil topically to your face, chest, or neck that is affected by acne, it can quickly moisturize that skin, flush out toxins, and return sebum production to normal levels. In addition to inflammation, this can quickly heal and soothe the symptoms of acne, while also reducing the appearance of scars and blemishes from this condition. [8]

Not commonly known as a popular weight loss supplement, borage oil can stimulate the metabolism and decrease appetite. This oil also improves your cholesterol profile, leading to less fat deposition and more energy to be active and burn off calories. [9]

Traditionally, borage oil was used on the hair to reduce frizzy or dry hair, while also rubbed into the scalp in order to moisturize the skin and prevent dry skin or dandruff. It can also eliminate oxidative stress in the scalp and boost hair growth, even if a person is beginning to go bald. [10]

For those who deal with diabetes on a daily basis, using borage oil can help regulate blood sugar and insulin resistance, preventing the dangerous spikes and drops in glucose that diabetic patients fear. [12]

Studies have linked decreases in hyperactive disorder and chronic anxiety to the use of borage oil, as it can have a soothing effect on the nervous system. This can improve focus and concentration, and lower levels of stress hormones in the body, which can lower your oxidative stress. [13]

The hormonal effects of borage oil are known to eliminate anxiety and symptoms of depression and boost mood in a measurable way. Some people choose to use this oil in aromatherapy practices, and while this isn’t the most common use, it is definitely effective to keep your emotions and worries under control all day. [14]

Inflammatory conditions of the skin can be difficult to eliminate, particularly if they flare up without warning. Research has proven that regular application of borage oil to eczema, psoriasis and rosacea-affected areas can have a rapid and soothing effect. [15]

One of the most important uses of borage oil is for people who may have had a bit too much to drink. Borage oil can improve metabolism, speed up the detoxification of the body, coat the stomach, and boost energy levels, helping overcome even the worst hangovers. [16]

Side Effects of Borage Oil

There are a number of side effects to borage oil that should be considered such as an increased risk of bleeding disorders, gastrointestinal distress, the potential risk for prostate cancer, seizures, and possible complications with pregnancy. Before using borage oil, either topically or internally, speak to your doctor about your particular health conditions.

Rate this article
Average rating 3.9 out of 5.0 based on 64 user(s).
Read This Next:
Popular Articles