How Long Does Coconut Oil Last

On average, coconut oil is good for at least a year but based on the refining process and your method of storage, that base level of a year could be as high as 4-5 years, and as low as 6 months.

As with any other vegetable oil, coconut oil can go bad, or become rancid, which can be caused by exposure to light, air, water, and heat. Coconut oil does have an advantage over most other vegetable oils, as it is high in saturated fats, which are less prone to going rancid.

Typical vegetable oils have higher levels of polyunsaturated fats and unsaturated fats, which is why these oils can remain liquids at room temperature. The carbon-carbon double bond found in these types of fats can quite easily be broken by oxygen, forming a carbon-oxygen bond. The byproducts of this chemical interaction come in a number of forms, including ketones and carboxylic acid, which can have foul smells and flavors. This process of oxygen breaking bonds is called oxidation, and happens in everything from browning apples to rusting cars. [1]

Oils can also become rancid when they are exposed to water (hydration), light and heat. Hydration can similarly break up those carbon double bonds, leading to other foul-smelling compounds that you don’t want to consume. Light is a form of energy, which can drive the breakup of bonds, or make them weaker, while heat causes the molecules to move around faster, bouncing into one another and forming new bonds faster than when they are at a cool, stable temperature. Finally, various microbes are able to slice and dice carbon bonds, resulting in rancidity in these oils. [2]

Coconut oil has lower levels of polyunsaturated and unsaturated fats than other vegetable oils. In fact, the saturated fat content of this oil can be as high as 90%, which is why it remains solid at room temperature, and will only become a liquid at temperatures higher than 76 degrees Fahrenheit. These saturated fats are also less susceptible to hydration and the effects of light and heat, although coconut oil should still be stored in cool, dry and dark places when not being used. Some people assume that storing it in the fridge is a logical choice, but this can leave the coconut oil extremely hard and difficult to scoop out for use. [3] 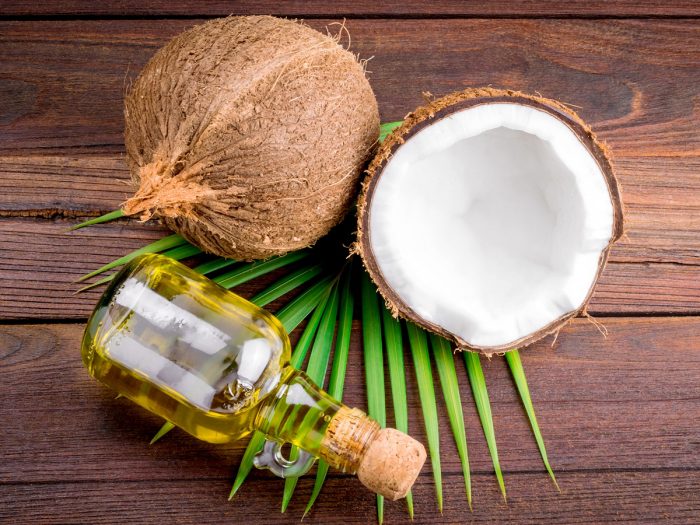 Coconut oil is used for cooking as well as skincare. Photo Credit: Shutterstock

That being said, coconut oil does contain some of those fats that are more likely to go rancid, so coconut oil cannot be stored and used indefinitely. Eventually, the oil will go rancid, particularly if you are using a large jar and regularly opening it, regularly exposing it to air, water and heat in the environment. The question is, exactly how long can coconut oil be expected to last? [4]

How Long Does Coconut Oil Last?

The shelf life of coconut oil largely depends on how you store it and the type of coconut oil you purchase or make. Normal coconut oil is refined and processed, which can add other ingredients and weaken the saturated fats’ ability to combat oxidation and other things that lead to rancidity. [5]

As mentioned above, if you keep your refined coconut oil in a cool, dark and dry place, in a tightly sealed jar, it should last for at least 12 months without going rancid. Most of these products have an 18-month use-by date, and when properly stored, can remain viable for 2-3 months past this date.

Unrefined coconut oil is commonly referred to as “virgin”, meaning that it hasn’t undergone any chemical processing (bleaching and deodorizing). This unadulterated state means that it has a longer shelf life than refined varieties, roughly 2-3 years, but this is again contingent on proper storage. [6]

The manner of extracting is also important when considering how long an oil can last. Cold-pressed coconut oil is extracted at slightly lower temperatures, and as we learned above, heat can speed up the oxidation process. Expeller-pressed coconut oil, on the other hand, will experience higher temperatures (as a result of pressure and friction), and will therefore not last as long.

All of these numbers are estimates based on their processing and refinement methods, but cannot account for personal storage choices, the temperature where you live, etc. The best way to tell if a coconut oil has become rancid is simply smelling it or checking for any color changes. Rancid coconut oil will not have the subtle or nutty flavor of fresh oil, and may take on a cloudy or yellowish color in liquid form, rather than the white or clear color you might expect. [7]

If you aren’t sure about whether coconut oil has gone rancid, err on the side of caution and throw it out. After all, this popular oil is widely available, and relatively inexpensive. To get the most out of your oil, buy virgin organic coconut oil and store it in a dark, cool and dry place, and only leave it exposed to open air for as long as necessary before sealing it back up. In this case, it is possible to store your oil for an indefinite period, with anecdotal reports saying that the oil remains useful and effective for up to 5 years!

Rate this article
Average rating 4.1 out of 5.0 based on 42 user(s).
Read This Next:
Popular Articles