What Is Neem Oil?

Neem oil is derived from the seeds and fruit of the neem tree (Azadirachta indica), which is native to India and highly prized in that country is widely used for medicinal and agricultural purposes. Nimbin and azadirachtin are two of the key active antioxidants in neem oil which gives the oil its antiseptic, antifungal, antipyretic, and antihistamine properties. Depending on the method of extraction like cold-pressing, steam distillation or solvent extraction, the strength and potency of this oil may vary. The color of the oil may similarly vary, from pale yellow to hues of brown, green and red. [1] [2] [3] [4] 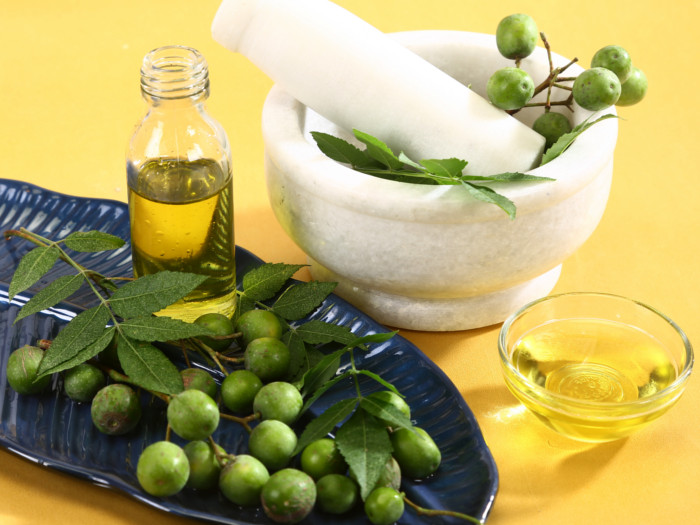 Neem oil is a vegetable oil pressed from the fruits and seeds of the neem. Photo Credit: Shutterstock

Neem oil is effective in treating many health conditions and some of the important benefits of neem oil are discussed below.

In terms of hair health, neem oil is a common ingredient in hair masks, natural shampoos, conditioners and treatments for everything from frizzy hair to dandruff. The moisturizing, antibacterial, and nutrient-dense nature of the oil makes it ideal for optimizing hair health by preventing excess water from being absorbed by your hair.

Neem oil can be used for the skin in a variety of ways. It can protect against and treat various fungal infections on the skin and nails, while also eliminating inflammation and improving the appearance of blemishes and age spots. It can reduce the severity of sunburns, provide moisture to the skin, lower the occurrence of acne through its antibacterial action, and promote the growth of healthy new cells to give your skin a healthy glow.

From arthritis and headaches to acid reflux disease and psoriasis, the powerful anti-inflammatory compounds found in neem oil make this an effective remedy for a number of common conditions, including those that affect the scalp. [5]

Some people use neem oil for its diuretic properties, which help to stimulate urination, and thus the elimination of excess toxins, salts, fats and water from the body. This can help relieve the strain on the kidneys and the immune system. [6]

Traditionally, neem oil has been prescribed for people following an extended illness, injury or surgery, as it helps to stimulate the appetite and aid weight gain. This is also an excellent remedy for people who are struggling with an eating disorder or metabolic problems that cause weight loss or poor nutrient uptake.

The notable antibacterial and antiseptic properties of neem oil have made it a popular remedy for gingivitis, pyorrhea and other infections that can affect the gums and teeth. You can apply small amounts directly to the gums for rapid relief, as well as fresh breath. [7]

Intestinal ulcers are a result of imbalanced pH levels in the stomach. Acidity is caused because of the excessive secretion of gastric juices, which ultimately causes an ulcer. Neem is known to have potent gastro-protective and antiulcer effects. It restores the pH levels and soothes acidity in the stomach. [8]

This oil is packed with fatty acids, including alpha-linolenic acid, linoleic acid, and oleic acid, as well as palmitic and stearic acid. In the proper amounts, these fats are essential for the body, and can even help to balance proper cholesterol levels in the body. Research has shown that neem oil can lower blood pressure, normalize heart palpitations, drop cholesterol levels and eliminate inflammation in blood vessels and arteries, leading to a lower risk of atherosclerosis, heart attacks, and strokes.

The antibacterial and antifungal activities of this oil make it a popular choice for those looking to boost their immune system and protect against various infections. The active ingredient in neem oil, azadirachtin, is known to break down the cell walls of bacteria and neutralize them before they can spread, providing rapid relief from a variety of bacterial infections. [9]

Neem and its derivates, including neem oil, have been of interest for their viability to play a role in cancer therapy. According to a 2018 review published in [10] [11]the International Journal of Molecular Sciences, neem oil and neem extracts have anticancer potential and can aid in preventing proliferation and growth of cancer cells.

A study published in [12]the Asian Pacific Journal of Cancer Prevention in 2017, showed that neem seed oil prevents the growth of breast cancer cells by inducing apoptosis and has potential to be used in managing cancer.

Nimbolide present in neem oil has been found to be effective against pancreatic cancer, according to a study published in 2016 in Scientific Reports [13]

A 2016 study analyzing the genotoxicity of neem oil on oral cancer observed that this oil could effectively degrade the DNA of such cell lines. Thus, it shows the potential to be integrated into anticancer therapy. [14]

Another research published in 2012 in [15]the Carcinogenesis journal has attributed the anticancer activity to the presence of limonoids (azadirachtin) in neem oil. It helps induce apoptosis and autophagy which can help in causing cancer cell death. It also suggests that neem oil can be developed to prove beneficial against several types of cancers.

However, clinical trials and further research would be required to support the findings and develop neem oil as an anticancer agent.

Not only is neem oil used in various cosmetic and personal care products, but it also finds its application in various other industries too. Below is a list of uses of neem oil:

How to Buy and Store Neem Oil?

It is best to buy organic neem oil since contaminated or solvent mixed ones would be less potent, more harmful and will have limited applications. Therefore, read the labels in detail, also noting their expiry date. The oil is best suited for use until two years of manufacturing and in a transparent bottle, the neem oil should appear cloudy and yellow in color. Avoiding buying its extracts since they are less potent.

Store them in a dark and cold area, probably your refrigerator. It may easily solidify. However, keeping the bottle in lukewarm water would get it back in its liquid form. It is important to note that boiling water would break down its most essential component azadirachtin. Therefore, only lukewarm to warm water is advisable for re-liquefaction.

Side Effects of Neem Oil

Use of neem oil does come with the risk of certain side effects that include the following:

Rate this article
Average rating 4.1 out of 5.0 based on 87 user(s).
Read This Next:
Popular Articles