What Is Virgin Coconut Oil & What Are Its Benefits

Virgin coconut oil might be known for its pleasant fragrance and taste, as well as its healthy antioxidants, medium-chain fatty acids, and vitamins. While coconut oil is certainly not foreign to most, virgin coconut oil might sound unfamiliar. It is not simply another name given to the ordinary coconut oil by some company just to increase sales numbers, as many may assume. So what is it, exactly?

What is Virgin Coconut Oil?

People prefer using VCO for personal care purposes like oil-pulling and skin moisturizing as well as drinking it raw. It is also favored over coconut oil for baking and sautéing due to its creamy, tropical flavor. It is also a good choice if you are adding it to smoothies, coffee, and shakes. On the other hand, refined coconut oil is better used for frying.

You should make an informed choice when you buy coconut oil. Here are the main differences between virgin coconut oil and refined coconut oil.

Virgin coconut oil might be extracted from coconut meat obtained from fresh coconuts. It may be done using natural methods like dry processing, fermentation, churning (centrifugal separation), cold compression, and wet-milling; so, no bleaching or deodorizing takes place. This is why this might be the most unrefined or pure version of coconut oil, giving it a more pronounced coconut flavor. [2]

On the other hand, refined coconut oil may be extracted by cold compression or cold milling of copra (another name for sun-dried coconut kernels) with a moisture content of around six percent. This is why this kind of oil may not taste as coconut-ty as pure coconut oil or VCO. It might be processed through high heat exposure, and solvents like hexane are used. Refined coconut oil may also be known as RBD because it is refined, bleached, and deodorized. [3]

Both, VCO and RBD coconut oil look pretty similar in liquid form. You may find some tiny coconut meat pieces in the pure virgin version as it is made with natural methods. In solid form, VCO is pure white whereas refined coconut oil may range from white to light yellow color.

On grocery aisles, refined coconut oil will most likely state that is refined whereas VCO can also be labeled as extra virgin, pure, unrefined, or cold-pressed oil. [4]

The two varieties might not differ much in composition, except for the fact that some polyphenols, vitamins, and minerals that contribute to the taste, fragrance, and goodness of coconut oil may be found more in VCO than its ordinary counterpart. A 2009 study published in the International Journal of Food Sciences and Nutrition confirmed that VCO had better antioxidant capacity than refined, bleached, and deodorized coconut oil. [5]

VCO may be pricier than regular coconut oil since the production is more complicated and costlier. The prices may vary depending on the manufacturer, quality, and quantity (retail and bulk). Regardless of those small differences, it almost inevitably costs more than its ordinary counterpart. 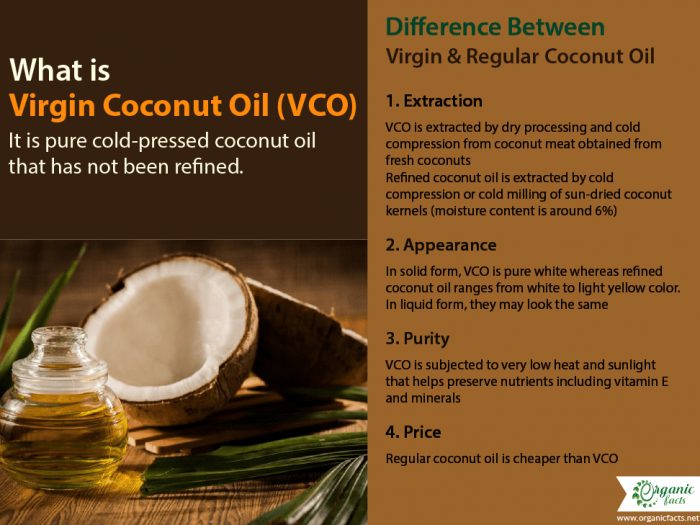 The shelf life of virgin coconut oil is much longer than any other edible oil and its variant, the RBD coconut oil.

The Philippines, Indonesia, Burma, Sri Lanka, India, and other tropical countries are the major producers of VCO. The oil is cheaper in these countries as compared to the United States, Canada, and Europe. Irrespective of the price, when you are out to buy VCO, you must go for the reputed and trusted brands. Many players in the market just add artificial flavor to regular coconut oil and sell it as VCO.

VCO might have a very good taste and smell since it is derived from fresh coconuts and is subjected to very low heat and sunlight. It is also not refined. This may preserve all the natural goodness of this oil, including its high content of vitamin E and minerals. These nutrients are otherwise robbed from the ordinary coconut oil during processes like heating, filtration, refining, and bleaching, which are done to make it colorless and odorless. Furthermore, it is very effective as a moisturizing agent. Its antioxidant properties are far better than those of normal coconut oil.

Since it is not subjected to heat (or even if it is a very low heat), or sunlight, and is extracted from fresh (non-dried) coconuts with a different process of extraction, VCO may certainly be richer in benefits than ordinary coconut oil. It may be higher in antioxidants (which are nil or negligible in ordinary coconut oil), taste, and fragrance than the refined version. [6]

Researchers, in an animal study, found that supplementation of VCO potentially had an antithrombotic effect compared to copra oil. The 2016 study suggested that virgin coconut oil might have a significant beneficial effect on blood coagulation, which could help prevent cardiovascular diseases. Another 2017 study published in the Evidence-Based Complementary and Alternative Medicine journal found that consuming 2 tablespoons of VCO in young healthy adults may have the potential to increase the levels of HDL or good cholesterol. [7] [8]

Other than these health benefits, VCO may have the same anti-inflammatory, analgesic, antipyretic, antioxidant, anti-stress, and antimicrobial properties as regular coconut oil. [9]

The shelf life of virgin coconut oil is much longer than any other edible oil and its variant, the RBD coconut oil.

What is Extra Virgin Coconut Oil?