When no food is consumed by the body, the body turns to the fat deposits for energy, which releases chemicals from the fatty reserves and results in the eradication of these chemicals through the organs. It has been well-favored by Ayurvedic therapy for cleansing and correcting the imbalances in the body. [1]

After fasting, the blood is filled with better levels of endorphins, which makes you more alert and provides you with a feeling of good mental health. Studies have also provided evidence of healthy aging of the brain, which is attributed to calorie restriction and intermittent fasting. The effects of fasting are considered similar to that of exercise. [2]

Studies have demonstrated that a change in the levels of glucose due to fasting proves beneficial for the effectiveness of chemotherapy performed against tumors. Fasting for a defined period may stimulate changes related to the protection of body cells and may be favorable for the patients suffering or undergoing tumor therapy. [3] [4] [5] 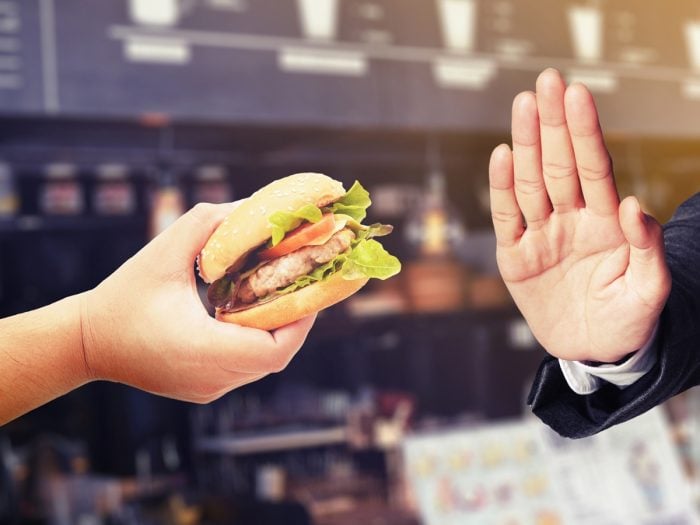 Fasting has been in use to combat obesity for a long time. A study has demonstrated positive results with respect to average weekly weight loss that occurred in the patients after fasting. It triggers the liver enzymes and breaks fat and cholesterol into essential bile acids, which stimulate the metabolism and convert the surplus fat into heat. It also helps you avoid overeating as it regulates the hunger hormone levels – ghrelin. Regular fasting has also shown to improve eating patterns over time. [6]

Fasting helps reverse the age-related decline in intestinal stem cell functioning. Studies say that during fasting, the cells break down fatty acids instead of glucose and this helps the cells become more regenerative. [7]

Epilepsy refers to a brain disorder in which a person suffers from recurrent convulsions that can lead to a transformation in behavior. Fasting has been proven beneficial for patients suffering from epilepsy. Studies on this topic have shown positive results in terms of the frequency of seizures in such patients. [8] [9] [10]

Rheumatoid arthritis is a chronic medical condition that causes inflammation of flexible joints, surrounding tissues, and organs. Under medical supervision, controlled fasting has shown significant results in the studies conducted. However, it has been recommended by medical professionals to proceed with a vegetarian diet thereafter. [11] [12]

The pancreas plays an important role in producing digestive juices and releasing the hormones in the body, including insulin. When the pancreas becomes inflamed over a short period, it is known as pancreatitis. Along with intravenous feeding and fluid therapy, fasting has also been accepted as a treatment strategy for acute pancreatitis. Insulin regulation also prevents type-2 diabetes as the glucose levels are normalized. [13] [14]

Fasting also promotes the healing process in the body. When food is no longer present in the stomach, the body focuses on other vital functions like metabolic activity and the immune system, rather than digestion which is not necessary until the next meal. Research has shown significant development in the immune system of the intestines and overall health of the subject patients under medical supervision. Athletes are also encouraged to fast during training days, to shed excess fat and optimize muscle growth. [15]

The mechanism of autophagy involves the synthesis and recycling of cellular components by the degradation of unnecessary cells. It gets promoted during fasting. This leads to the production of healthier cells and tissues throughout the body, leading to healthier skin. It also aids in collagen production and acne treatment. [16] [17] 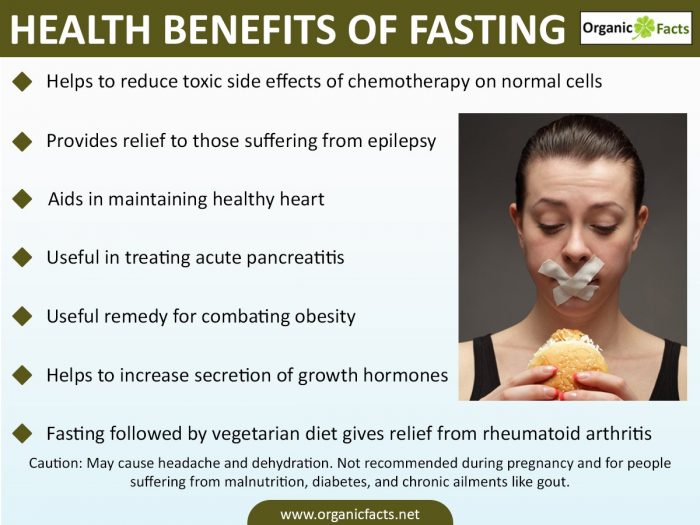 Fasting influences the regulation of glucose and cardiovascular health. This has been demonstrated by various studies conducted in this regard, along with other health benefits including lowering blood pressure, body mass, triglycerides, and increasing insulin sensitivity and levels of HDL (good) cholesterol. [20] [21] [22]

Doctors recommend short fasting, which is normally 2-8 hours, as groundwork for certain diagnostic investigations to obtain more accurate results. In case, the surgery involves the organs of the digestive system, fasting may be recommended before and after the surgery to ensure empty bowels. This helps to protect the lungs from getting any content from the stomach during anesthesia. Based on the studies that have been conducted in this regard, medical professionals recommend that consumption is limited to fluids such as water, clear fluids, and fruit juices before surgery. [23] [24]

The body gets an opportunity to repair itself as a result of a slower metabolic rate, better defense mechanisms, and protein production during fasting. This leads to improved mental well-being, clarity, improved blood circulation, and a feeling of rejuvenation. Scientists believe that all of these effects contribute to a slowdown in aging and an extended life expectancy. Fasting also boosts stem cell’s regenerative capacity. [25]

Although fasting has been believed to be a natural and effective method of helping the body get rid of harmful toxins, it is also vital to be well aware of its possible side effects and hitches. [26]

In spite of the multidimensional benefits and acceptable side effects, fasting can prove dangerous in certain medical conditions. It is not recommended for people already suffering from malnutrition, diabetes, and chronic ailments like gout, advanced stages of cancer, and cardiac arrhythmia, in which the heart beats irregularly. It is also not advised for pregnant or nursing women. [27]

The body enters into the fasting mode only after 7-8 hours of having the last meal, since that is when the body typically finishes utilizing the nutrients from the food. Usually, the body draws its energy from the glucose that is present in the liver and muscles. When the body undergoes a fast, this stored glucose is the first thing to be utilized. If the fast continues long enough and the glucose runs out, the body depends on the accumulated fat for further energy requirements. However, this type of energy release is only available to an extent, after which the body starts to attack the stored proteins. This is also known as starvation, which is not a healthy method of fasting. This can happen if the fasting continues for several days. [28]

Rate this article
Average rating 3.9 out of 5.0 based on 464 user(s).
Read This Next:
Popular Articles