Known best for their role in beer production, hops also have a variety of medicinal uses and have played numerous roles throughout history.

Hops are the seed cones of a perennial herbaceous plant that is scientifically known as Humulus lupulus. Technically the flowers of this plant are cultivated around the world for their seed cones, many varieties of which are used in the brewing of beer. For more than 1,000 years, they have been a key ingredient in this popular alcoholic beverage. Their cultivation has continued to evolve, particularly in recent years, as beer brewing has undergone a veritable Renaissance in some parts of the world. [1]

Not only do these flowers act as a stabilizing agent in beer, but also provides different flavors, and some antibacterial and antioxidant protection to the beverage during production. While hops are found in almost all beer, they are not considered one of the essential ingredients – e.g., yeast, water, malted barley. However, they do act as a preservative and stabilizer in beer, so they are almost always included. The inclusion of malt gives a sweetness to the beer, whereas these seed cones can add bitterness and balance the flavor in various ways. [2] 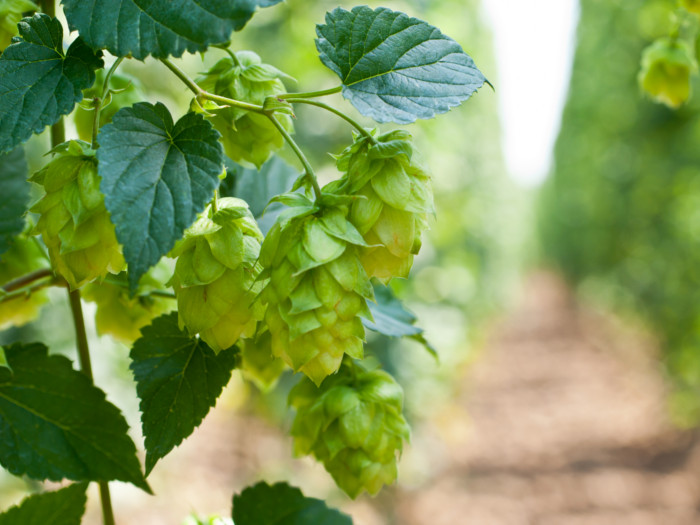 Hops are used to balance the flavor in beer. Photo Credit: Shutterstock

Nutritionally speaking, hops don’t contain a wealth of nutrients, but they do have notable levels of vitamin B6, vitamin C, and vitamin E, as well as a variety of antioxidant flavonoids, including a unique compound named xanthohumol. [3]

The health benefits of hops in various forms include relaxing the muscles, boosting cognitive health, easing cardiovascular issues, and protecting skin health, among others.

In addition to these benefits, a 2018 study published in the journal Frontiers in Pharmacology has studied the anticancer potential of hops. It suggests that xanthohumol found in hops could work as an anticancer agent to hinder the process of carcinogenesis and metastasis. However, further studies are required to fully exploit its capabilities against cancer. [6]

There are quite a few uses for hops outside of brewing beer, such as in extract form or various capsules.

There are various side effects of consuming hops or using products that are derived from these seed cones. Furthermore, the essential oil is very potent and can cause more severe side effects when used improperly or in excess.

Rate this article
Average rating 3.9 out of 5.0 based on 5 user(s).
Read This Next:
Popular Articles