Drinking horse milk is something that most people have never even considered, but in some parts of the world, this practice is quite common, and the health benefits are surprising.

What is Horse Milk?

Horse milk, as the name implies, is milk taken from a female horse, which is why it is often called mare’s milk. The most common use of horse milk, outside of feeding foals, is to produce a beverage called kumis, which is a fermented dairy product. Some European countries have powdered horse milk available in markets and stores, but it is quite uncommon to see mare’s milk in liquid form. Due to the prevalence of other milk options, such as cow’s milk, goat’s milk, soy milk, and rice milk, horse milk is rarely the preferred choice. The availability of this type of milk is also prohibited in some of the countries of Europe and America. [1]

Traditionally, mare’s milk was very important to many cultures, and it remains a key part of natural healing in certain regions. That being said, there are a number of impressive nutritional components in horse milk, which has resulted in increased popularity in this milk alternative. One thing to remember is that mare’s milk does contain higher levels of lactose than cow’s milk, so this is not a safe alternative for people with lactose intolerance. On the other hand, there is less casein in horse milk, making it easier to digest. [2]

The nutritional components of horse milk include very high levels of vitamin A, B-family vitamins, vitamin C, and vitamin E. In fact, these nutrients are found in higher concentrations than in cow’s milk. Mare’s milk also provides notable levels of potassium, iron, calcium, and magnesium. Mare’s milk only has about 88 calories in 7 ounces, while there are nearly 130 calories in the same amount of cow’s milk. This specialty milk is also quite low in fat, and much of the fat that it does contain is monounsaturated. [3] 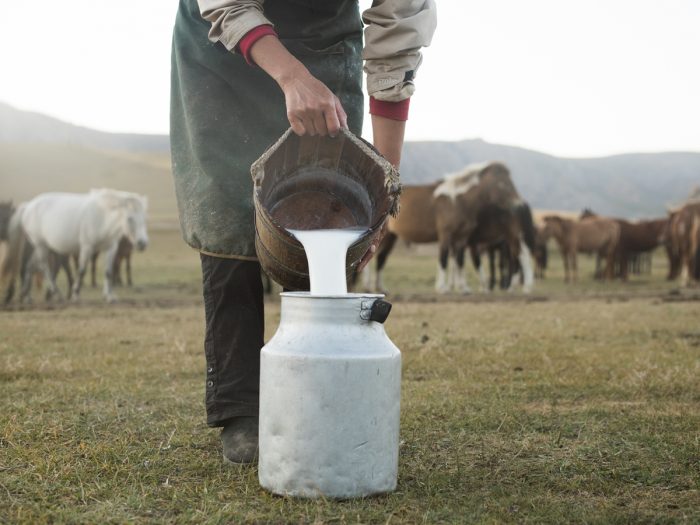 A man pouring milk in a milk can in a farm. Photo Credit: Shutterstock

The most well-known benefits of mare’s milk include improving eczema symptoms, detoxifying the body, aiding digestion, boosting bone density, protecting the heart, and reducing inflammation throughout the body.

In traditional medicine, mare’s milk has been applied to patches of inflammation on the skin, such as those caused by eczema, psoriasis, rosacea or other irritation. Mixing mare’s milk with aloe or coconut oil can help relieve this discomfort quickly.

With less casein in horse milk than regular milk, you can give your stomach an antibacterial boost, since this milk is also rich in certain antibodies that can rebalance your gut flora and reduce symptoms of constipation, bloating, and indigestion. [4]

With higher mineral concentrations than cow’s milk, mare’s milk can help you prevent the onset of osteoporosis and help your metabolism function normally as you age. [5]

There is a notable level of potassium in mare’s milk, which acts as a vasodilator, reducing the tension in blood vessels and arteries, which can lower your risk of atherosclerosis, heart attacks, and strokes. [6]

Research has found that mare’s milk has a stimulating effect on the liver, which can help your body eliminate toxins more effectively. This aids in overall health and wellness, and can provide a boost to the immune system.

Rate this article
Average rating 3.7 out of 5.0 based on 103 user(s).
Read This Next:
Popular Articles