Is Nutmeg A Nut

Coming from the genus Myristica, nutmeg is cultivated for two spices obtained from its fruits, including nutmeg and mace. While mace is not argued upon so much, nutmeg is a constant source of worry for those with a tree nut allergy. The big question remains – is nutmeg a nut? Let’s take a look at it in this article.

Is Nutmeg a Nut?

Nutmeg is used as a spice in many dishes, such as cakes, desserts, and other baked foods. It is also very popular in Moroccan and Indian cooking. However, for many people it still remains a matter of concern. If you have a tree nut allergy, should you eat nutmeg? The simple answer to this question is that nutmeg is not a nut, it’s a seed. [1]

This implies that if you have a nut allergy, you are still safe to consume nutmeg. However, you may need to check for a seed allergy and in that case have to avoid nutmeg altogether. This would require tests and analysis specific to nutmeg. 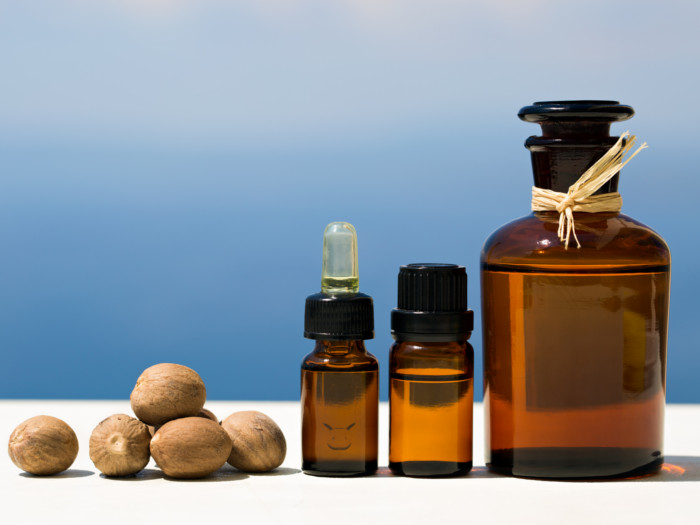 Nutmeg oil is derived from the seeds of nutmeg. Photo Credit: Shutterstock

There are millions of people who are affected by nut or peanut allergies, most commonly children. Adults can also develop a nut allergy. However, nutmeg allergies are much rarer.

There is not enough data suggesting why people develop seed allergies, although the most common seed allergy is usually seen with sesame. In fact, sesame seed allergies are so common in certain parts of the world, such as Canada, that it is mandatory for them to mention it on their nutrition labels if a product contains even trace amounts of sesame.

Nutmeg, when taken in large quantities, raw or otherwise, can have psychoactive effects on a person. It comes from the presence of myristicin and elemicin in it – they can induce convulsions, nausea, dehydration, and body pain when taken in large amounts. When consumed by children or for intentional recreational use, it can also lead to nutmeg poisoning. [2]

It can cause varying side effects, differing from one individual to another. These include:

Nutmeg intoxication can last for days at a time. It can also prove to be fatal in certain cases when combined with other drugs. Having said that, just because you have a nut allergy, it does not mean you are allergic to nutmeg. You need to check with a medical practitioner to ascertain that. [3]