Adding mace to your spice rack is a great way to invigorate your cooking and give yourself a healthy boost in the process!

Mace is a spice that is prepared from the aril surrounding the seed of the nutmeg plant. Scientifically known as Myristica fragrans, this plant bears nutmeg kernels, which are highly sought after for the popular nutmeg spice, but the aril is separated in processing and used for slightly different culinary applications. This spice is particularly popular in India and other Asian countries, where it is known as javitri and is commonly included in Indian cuisine. [1]

After mace is separated from the nutmeg kernel, it is flattened out and allowed to dry for 10-14 days, where the aril often pales in color from its original vibrant red. This spice can then be used in the whole form of ground, depending on its intended use. 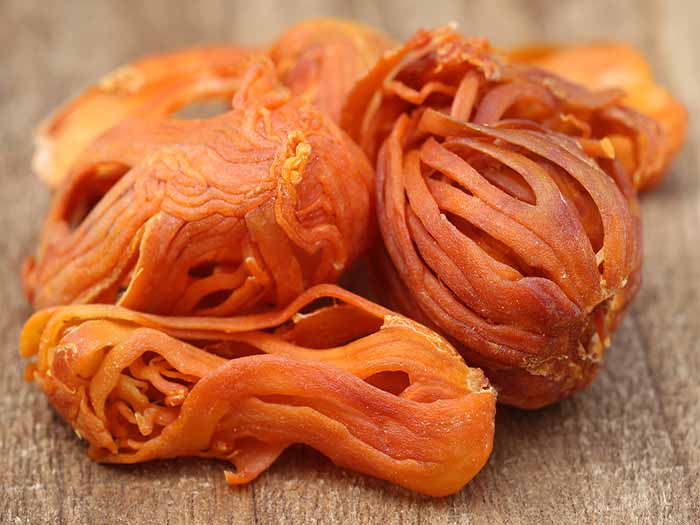 The nutritional profile of this spice is quite impressive, which may explain its popularity, and it contains vitamin A, vitamin C, iron, calcium, copper, iron, manganese, dietary fiber, B vitamins, and other trace amounts of key minerals. The spice has a small amount of fat, and a high concentration of volatile acids and antioxidants, such as myristicin, carotenoids, Linalool, pinene, cineole, and eugenol, among others. These powerful components are the reason this spice can deliver so many health benefits when used responsibly. [3]

The health benefits associated with mace include improving digestion, preventing certain types of cancer, relieving pain, stress, and anxiety, soothing the nervous system, detoxifying the body, and strengthening the immune system, to name a few.

Research published in the International Immunopharmacology journal suggests that the lignans present in mace show antioxidant properties and they can protect you from radiation-induced DNA damage. They are also found to initiate cancer cell death, thereby preventing its spread. [4]

With high levels of vitamin C and A, this spice can boost your immune system against foreign pathogens and infections. [5]

When topically applied, mace is known to soothe inflammation and eliminate pain, while also protecting wounds from infections. [6]

Commonly used as a tonic for the nerves, this spice can lower stress hormone levels and eliminate anxiety when regularly used. [7]

It can reduce inflammation throughout the body, including in the gastrointestinal system to improve digestive function, and other chronic inflammation linked to more serious diseases. [8]

This unique spice is used both internally and topically for medicinal purposes. When consumed internally, this spice can treat many different gastrointestinal issues, as explained above. However, it should not be eaten in excess, as it could potentially have psychoactive effects, similar to the side effects of eating too much nutmeg. [9]

When applied topically, the spice is often combined with a carrier oil or water to create a paste, which can be applied to wounds, aches, pains, and inflammatory conditions.

Unless you are a regular practitioner of natural health remedies, your experience with mace is likely in the kitchen. Mace has a subtle flavor that makes it an ideal ingredient or flavoring spice in baked goods, meats, vegetable dishes, and fish. Some people also use this spice in the process of preserving food.

Stews, curries, and savory sauces also benefit from the slightly sweet flavor of this spice, and it is a favorite spice when making homemade pickles. Indian cuisine is the most common place to find mace in your food.

If you don’t have this spice on hand, you will want to replace it with something of equally subtle sweetness. Nutmeg is the obvious choice, given the two spices have the same origin and a very similar flavor, but allspice will also suffice to mimic the flavor in most dishes. Ginger can be used in some sauces or marinades to substitute for mace’s sweetness, but only a small amount needs to be used, due to its potency. Similarly, cinnamon has a strong, warm sweetness, so use it in moderation when substituting for this spice in a recipe. [10]

How to Select and Store Mace?

You will want to select lacy arils that are brittle and hard, ensuring that they have been fully dried. These varieties are called “blades”. In most cases, however, you will find the powdered form, which should be yellowish-brown in color. In terms of storage, mace does possess a longer shelf life than many other herbs and spices, provided you store it in an airtight container in a cool, dry place.

Difference Between Mace and Nutmeg

Nutmeg is the kernel that lies inside the red aril, which is made into the mace. Fresh mace is often considered stronger in flavor than nutmeg, but when they are both ground, the former has a slightly milder taste – similar to a combination of pepper and cinnamon. Nutmeg is brown in color, while the spice made from its aril ranges from yellowish-brown to orange or red. In our diet, they can usually be interchanged when preparing sweet dishes.

Word of Caution: If you consume mace in excess, it can cause gastrointestinal distress, as well as have potential psychoactive effects – symptoms that often appear when too much nutmeg is eaten.

Rate this article
Average rating 4.2 out of 5.0 based on 24 user(s).
Read This Next:
Popular Articles