Things You Should Know About IUD Pregnancy

There are many types of unplanned pregnancies and an IUD pregnancy is one that very few women encounter. If you experience one of these rare pregnancies, it is important to understand how it occurs and the specific ways to recognize it.

What is an Intra Uterine Device (IUD)?

To begin with, an intrauterine device (IUD) is a contraceptive device that is popular in many parts of the world, because it is a form of reversible birth control. The small device, which is typically shaped like a “T” is inserted into the uterus, where it releases a particular type of hormone that discourages conception. The best thing about IUDs is that they are extremely reliable, safe and long-lasting, rather than other forms of birth control, such as birth control pills.

There are many types of IUDs, some made of copper, and others that release the hormone and depending on the type you choose, you can effectively prevent a pregnancy for up to a decade. The copper varieties are effective because they not only discourage sperm from fertilizing the eggs but also make the lining of the womb less suitable for successful implantation of a fertilized egg. The success rate for many of these contraceptive devices is above 99%, but even at this rate, some women still become pregnant, despite having an IUD inserted. Given that millions of people use IUDs around the world, it is important to understand what an IUD pregnancy may look like. [1]

There are three main types of IUDs that a majority of women use – Skyla, Paragard, and Mirena IUDs.

This is a plastic intrauterine device that releases trace amounts of the progestin hormone, which makes it more difficult for the sperm to fertilize eggs. This popular IUD type also reduces menstrual cramping and the severity of menstrual bleeding. [2]

This is both a preventative measure and an emergency contraceptive strategy and is composed of a flexible piece of plastic wrapped in a coil of copper. This type of IUD does not rely on hormones to be effective. [3]

This is a similar IUD to the Mirena, but it is only good for 3 years, and therefore contains less progestin, as opposed to the 5-year use time of a Mirena IUD. [4] 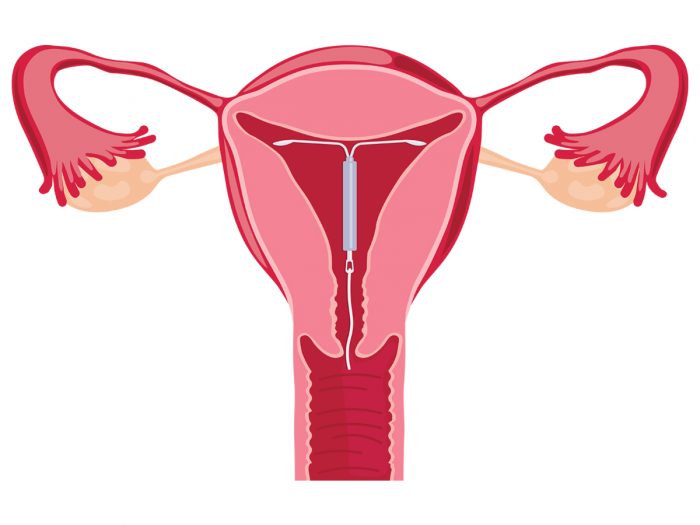 How Does an IUD Work?

As mentioned, IUDs work by making the womb an inviable place for a fertilized egg to implant, or they release trace amounts of key hormones that discourage sperm from fertilizing the egg at all. This anti-pregnancy hormone is usually progestin levonorgestrel. IUDs also work to reduce the severity of menstrual cramps and lighten periods, in many cases. Since these IUDs can be kept in for anywhere between 3 and 10 years, the prevention of painful periods is often as good a reason to use them as the preventing of pregnancy. [5]

How to use IUDs?

IUDs can be used by a majority of women, provided they don’t have a history of pelvic inflammation or ectopic pregnancy. If you have had a child before and want to prevent future pregnancy, without getting a hysterectomy, an IUD is one of the most reliable choices. However, many women who have not been pregnant before can also benefit from this contraceptive method. [6]

A trained physician should insert the IUD so you ensure that it is put in properly and effectively. It must be preceded by a thorough examination, and then the arms of the IUD can be bent back and pushed into the uterus. A small tube containing the actual IUD is then put into place with a plunger. Some of these IUDs will be effective immediately, while others will require 7-10 days to protect against pregnancy. You may experience cramping or minor discomfort for 1-2 weeks as the IUD settles into place, and for the first 3-6 months, your periods may be unpredictable or unusually heavy/light.

With such a successful rate of pregnancy prevention, most women will never experience an IUD pregnancy, but they do happen. Less than 10 in 1,000 women get pregnant whilst using an IUD and there are a number of reasons why this can happen. First of all, IUDs can slip partially or completely out of place, embed themselves in the uterus, or even pierce the uterus. All of these situations can compromise their efficacy.

While it is possible to have a safe delivery in an IUD pregnancy, there is also a higher risk of the pregnancy being ectopic or of the mother being unable or unwilling to bring the child to term. Furthermore, if a pregnancy occurs with the IUD in place, it can significantly increase the risk of infection or miscarriage. For that reason, a doctor will typically recommend a procedure to remove the IUD early on in the pregnancy. [7]

Symptoms of an IUD Pregnancy

The symptoms of an IUD pregnancy are largely the same as a regular pregnancy, such as breast sensitivity, nausea and morning sickness, fatigue and muscle weakness, missed periods, cramping, and vaginal bleeding. In some cases, these common symptoms are more pronounced when an IUD is in place, which makes it mandatory for you to visit a doctor. At this point, the IUD can be removed or your condition can be further discussed. If you are using an IUD and experience any of these symptoms, particularly after the first 6 months of using the device, see your doctor immediately. [8]

Rate this article
Average rating 4.3 out of 5.0 based on 31 user(s).
Popular Articles