For all the vegetarians/vegans or simply those who want to embrace a plant-based diet, why not include kombu in your diet? This edible ingredient, also known as the “king of seaweeds” has an amazing flavor and a high nutritional value. More so, the most striking benefit of this seaweed is its high content of glutamic acid, the amino acid responsible for umami – an oriental element that provides an elemental taste to the dish.

Let us explore in detail with a fantastic seaweed salad recipe to follow!

Kombu (Laminaria japonica) is an edible brown sea kelp that serves as sea vegetable or seaweed. It is traditionally used as a flavoring material, a food additive, and a type of foodstuff in many Asian countries. It is popular in Japanese cuisine as a flavored soup stock called kombu dashi. Due to the high concentration of glutamic acids, or MSG, it is valued for its in-depth flavor, umami. It is not fishy in any sense but has a briny, almost a mushroom-like flavor. Kombu is hard to digest and should be cooked for a long time before consumption. [1]

Kombu is a brown Japanese seaweed, sun-dried before use in sushi. Photo Credit: Shutterstock

There are various theories claimed over the years with one that is predominant even today. During the Muromachi period (1336 – 1573), kombu was allowed to be stored for more than a few days. Since then it has become an important export from the Tohoku area. Furthermore, during the early 20th century in Okinawa, kombu was easily cultivable, inexpensive, and readily available in the markets.

Kombu is a low-calorie and nutrient-dense food. On the health front, it is linked to fitness and longevity as it is a nutritional powerhouse. According to USDA FoodData Central [2], a 7g serving of kombu fetches you:

It also contains high levels of iodine ideal for thyroid functioning but it should be consumed in moderation. Moreover, it is known for reducing hypertension and blood cholesterol. It is also rich in vitamins A and C, which are beneficial for eye health and immunity. However, further studies are required to establish health claims of kombu as a beneficial food. [3] [4]

Have leftover kombu and don’t know what to do next? Make this perfect seaweed salad with ponzu sauce, or substitute it with soy sauce if you want to experiment and pair it with our delicious miso soup recipe! Meshiagare! (Japanese way of saying bon appétit). 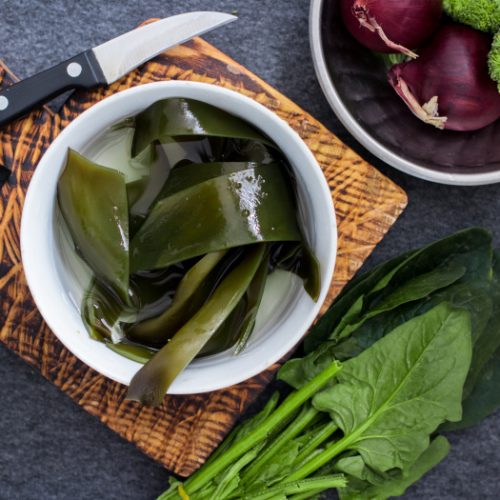 Kombu cannot be replaced and it is not advisable to use another seaweed substitute in its place. However, if you are unable to procure kombu for making dashi, you can get pre-made dashi broth. These stocks come in boxes that are similar to tea bags.

Furthermore, if kombu is entirely unavailable, you can fetch dried shiitake mushrooms rehydrated to get the umami-rich broth. This does not replace the dashi flavor but instead adds a complimentary taste to the dish.

Where to Buy Kombu?

Dried kombu is mostly found in East-Asian markets and health food stores. More often, the strips are covered with a white powder from natural salts. This white powder is full of the naturally occurring glutamate that gives kombu its umami taste.

You can store kombu in an airtight jar, away from sunlight, to retain the moisture. It does not spoil as long as it is kept dry but may start losing its sweet aroma and turn stale.


A journalism postgraduate from Macquarie University, Sydney, Sakina Kheriwala is a content writer at Organic Facts and an avid blogger who is passionate about health and wellness. Her blog “One in A Millennial” portrays her incomparable passion for writing, particularly on mental health. She believes that reading and writing is free and useful therapy. In her spare time, she is to be found reading books, socializing, and listening to soulful music. Sakina has completed an online e-certificate course on “Positive Psychiatry and Mental Health” from The University of Sydney, Australia.