Eating lamb meat is a common practice in many parts of the world, but as one of the less well-known meats, there are some things you should understand.

What is Lamb Meat?

Lamb meat is meat sourced from a lamb, which is a sheep in its first year of life. Lamb is considered red meat, because it has high levels of myoglobin, a protein found in muscle tissues of certain animals (e.g., cows) that turn the meat red once it is exposed to oxygen. Now, while lamb is red meat, grass-fed varieties are generally considered quite a healthy and reliable source of protein. In terms of being a lean type of meat, there is very little marbling of fat, so the majority can easily be trimmed off the sides, which can make it even healthier. [1]

When it comes to taste, lamb has a mild flavor that is gamier than chicken or beef, but the pleasant earthy flavor, particularly when barbecued or baked, is beloved around the world. Lamb meat only comes from young sheep, but there are two other varieties of this meat – hogget and mutton. Hogget usually comes from a sheep between 1 and 2 years old, while mutton comes from an adult sheep. The flavor of the meat intensifies as a sheep ages, but it also becomes tougher, which is why lamb is often preferred. 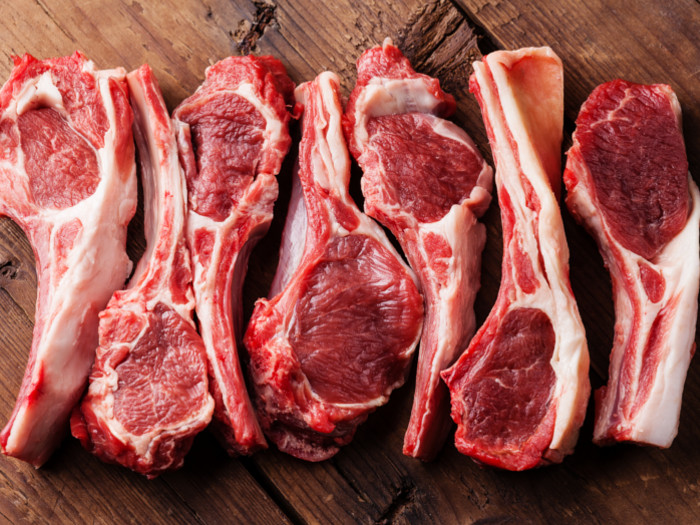 Limit consumption of red meat to no more than three portions per week. Photo Credit: Shutterstock

Nutritionally speaking, lamb meat is a very rich source of minerals, including iron, zinc, calcium, selenium, potassium, copper, and magnesium, as well as various B vitamins. 4 ounces of lamb contains nearly 28 grams of protein, but also delivers nearly 2/3 of your saturated fat intake each day, so moderation when eating lamb is strongly suggested. That same 4-ounce serving of lamb contains more than 330 calories. Aside from saturated fats, lamb meat also has some monounsaturated fats. [3]

The most notable benefits of eating lamb meat include the protection against anemia, improved muscle mass, better bone health, improved immune system and the health of nervous system, prevention of birth defects, among others.

With a good amount of both calcium and iron, this type of red meat can help to prevent anemia by providing enough iron to make new red blood cells. [4]

Despite being high in calories and saturated fats, there is some evidence that occasionally eating lamb can help promote fullness and boost metabolic activity, while also providing a great deal of protein.

Lamb is a rich source of folic acid, which is necessary to prevent neural tube defects in newborn children. [5]

With the omega-3 fatty acids in this meat, the skin gains some antioxidant protection, thus reducing the appearance of wrinkles and age spots. [6]

Lamb meat is an excellent source of many minerals, such as zinc, phosphorous, and selenium, all of which are necessary for bone mineral density. [7]

Without enough zinc in your system, your immune system will become compromised, but a single serving of lamb provides roughly 30% of your daily requirement. [8]

As an incredibly dense source of protein, lamb can help to repair and increase muscle mass, while also improving physical performance and metabolic activity. [9]

Lamb is rich in protein and vitamins such as iron and may help reduce the pain during menstruation and lower the risk of stroke and kidney disease. It also aids in relieving symptoms of autism and boosting the nervous system health.

There are some side effects of eating meat, particularly if you consume it in excess, such as the following:

As mentioned this type of red meat is quite high in saturated fat, so while eating lamb in moderation is acceptable, eating too much will cause your overall serum cholesterol levels to rise. This can increase your risk of heart disease, high blood pressure, and diabetes. Excessive amounts also increase purine levels in the body, which can lead to kidney stone formation. [10]

Swedish researchers, Larsson SC, Wolk A, published a study in the International Journal of Cancer, which stated that those who red meat in excess are at high risk of developing colon cancer with time. Another study published by researchers at the Vanderbilt University School of Medicine, Nashville, USA in the Nutrition and Cancer Journal stated that heterocyclic amines, (which are cancer-causing substances when meat is exposed to very high temperatures such as frying and grilling) are likely to give rise to different kinds of cancers such as colon, prostate, and breast. [11] [12]

Rate this article
Average rating 3.8 out of 5.0 based on 38 user(s).
Read This Next:
Popular Articles