Having some idea of good leek substitutes can be helpful when this member of the onion family is out of season or otherwise difficult to find.

Leek substitutes are relatively easy to find, due to the range of closely related vegetables. A leek is a vegetable in the genus Allium and is very closely related to onions, garlic, scallions, and shallots. It has a dense white stalk at the base leading to flat green leaves that spread out at the top. The entire plant is edible, with the base being the most commonly used. Leeks have a sweet, mild onion flavor, and tend to be used in soups and stews, as well as chopped in salads or as a garnish. [1] 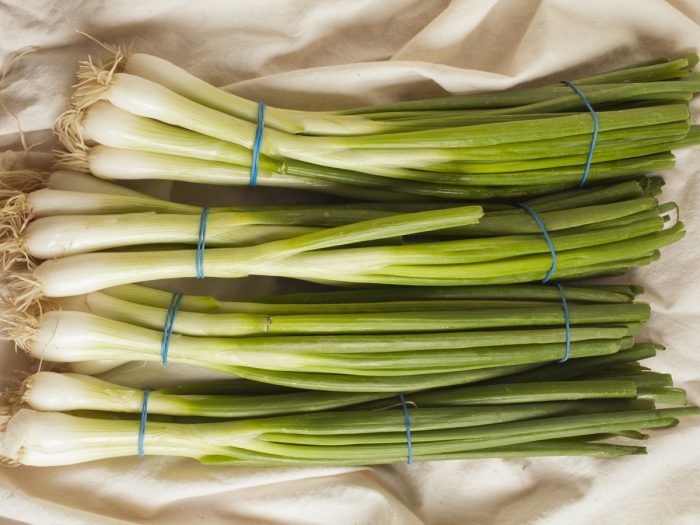 You can chop the scallions into fine pieces and sprinkle them on your salads. Photo Credit: Shutterstock

In general, fresh leeks are less widely available in grocery stores and supermarkets than other members of the onion family, especially during the summer months. They also tend to be one of the most expensive alliums when they are available. Depending on the intended use, other types of onions such as scallions, shallots, frozen leeks, garlic, and sweet onions can replace leeks easily in most recipes.

Some specialty markets may carry chopped and frozen leeks in the freezer section. In dishes such as soups, where the leeks are to be cooked, frozen leeks may make for an easy replacement.

The closest leek substitute in both flavor and appearance, scallions (also known as green onions) can be used in place of leeks in salads, garnishes, or other recipes that call for fresh leeks.  [2]

These small, mild onion bulbs may work well in place of leeks in many recipes, but especially as a replacement for sautéed leeks. Because they are also expensive, shallots might not be an effective substitute for the larger amount of leeks required for soups and stews.

While stronger and more pungent, a small amount of chopped or roasted garlic in place of leeks may add a similar flavor and aroma to many dishes. [3]

Although they have a stronger onion flavor than leeks, sweet onions may be the most commonly available leek substitute, as well as being one of the least expensive. When chopped, they might make an excellent replacement for leeks in stews, soups, and other common recipes.

Rate this article
Average rating 4.3 out of 5.0 based on 11 user(s).
Read This Next:
Popular Articles