Lotus seed, long used in traditional Chinese medicine and cuisine, offers many potential health benefits. They are usually sold dried and shelled, although fresh lotus seed that is still in the seed head is also sold. Read ahead!

What is Lotus Seed?

This is the seed of the lotus flower, which bears the scientific name Nelumbo nucifera as per research published by Dr. Pulok K. Mukherjee. Lotus seed, also called lotus nut, is harvested from the flower head after the seeds are fully formed, either while the head is still green, or once it begins to ripen. While commonly available in China and Japan, in other parts of the world they can be hard to find outside of specialty Asian markets. In Indian cuisine, lotus seed is known as makhana and comes from the seeds of Euryale ferox, a close relative of Nelumbo nucifera. [1] 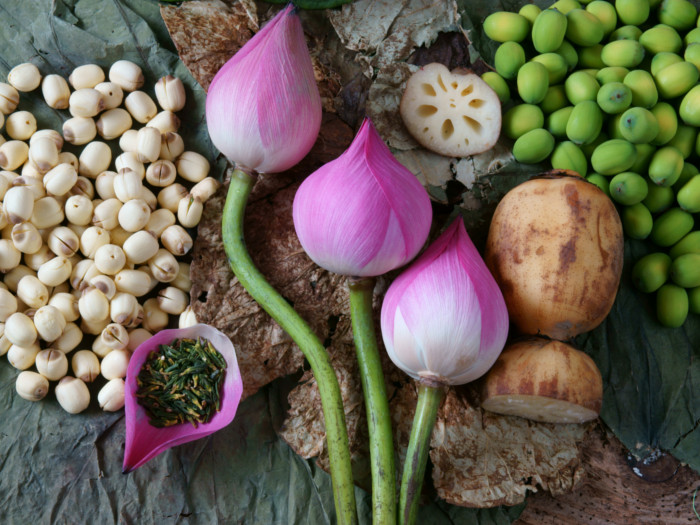 Lotus seeds are the edible kernels of the lotus plant. Photo Credit: Shutterstock

Lotus seeds have great nutritional value as they contain a good amount of protein and fiber, as well as many micronutrients, such as magnesium, potassium, zinc, phosphorus, and iron according to USDA National Nutrient Database. [3]

Preparation and Usage of Lotus Seed

There are many different ways to prepare lotus seeds, let’s take a look at them below.

Traditional Chinese medicine practitioners have used lotus seeds for thousands of years, and there are many potential health benefits to this ancient remedy.

The seed of the lotus is classified by traditional Chinese practitioners as ‘Yin medicine.’ This means that it is beneficial to the blood, tissue, and other fluid systems of the body, and is used to alleviate excess ‘heat,’ especially in the heart.

As per a study by Professor Gow-ChinYen, Department of Food Science, National Chung Hsing University, Taiwan, lotus nut contains an enzyme called L-isoaspartyl methyltransferase, which is said to have anti-aging properties. For this reason, it is sometimes mixed in cosmetics, such as anti-aging creams, although the benefits can also be enjoyed by eating the seed as well. [4]

Traditional usage of lotus seed is to alleviate diarrhea. They are also said to improve the health of the spleen and can harden up loose stool. Thanks to the anti-inflammatory effects of these seeds, it can also help to soothe hemorrhoids that may be caused by excessive bathroom trips. [5]

The natural chemical kaempferol is found in these powerful seeds, which helps to relieve inflammation of tissues. Lotus seed has often been used specifically to heal inflammation of the gums.

Lotus seeds have a calming and relaxing effect on the body, which can help reduce stress and anxiety, and also treat insomnia for those who struggle to get a full night’s sleep.