Maitake mushrooms may not be the first fungi you think to add to a dish. But this impressive mushroom has several powerful active ingredients and proven health benefits.

What are Maitake Mushrooms?

Maitake mushrooms (Grifola Frondosa) are found wild in China, Japan, and parts of North America. Colloquially, they are also called hen of the woods, sheep’s head, or dancing mushroom. The fungus has an underground tuber base and wide fronds of brown and gray wavy caps. They are known as an adaptogen, with a reputation for treating both physical and mental ailments and balancing the body. Maitake mushrooms are an important ingredient in traditional Chinese and Japanese medicine, used for longevity and health. You can find maitake powdered extract in many health food stores, for a variety of treatments. [1] 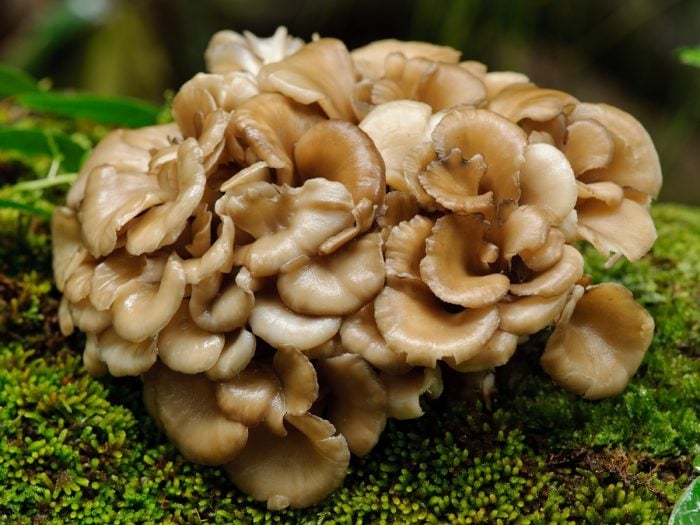 Maitake mushrooms have an intense flavor and a meaty texture. Photo Credit: Shutterstock

They are also a popular ingredient in Asian cuisine and can grow up to 50lbs on a single plant. While maitake can be grown at home, the peak season for foraging maitake is the fall season. They can be found growing at the bottom of oak, elm, and maple trees. They have a feathery, light texture, and an intense flavor much like morel mushrooms. They also naturally contain L-glutamate, a glutamic acid that produces the famous fifth umami flavor.

According to the USDA, one cup of raw maitake mushrooms contains 26 calories, with 4.8g carbs and 1.4g protein. These fungi are excellent sources of various nutrients that include: [3]

The health benefits of maitake mushrooms include their ability to fight cancer, treat infertility caused by PCOS, protect the immune system, and lower cholesterol levels.

Because of their immunity-optimizing and anti-inflammatory properties, maitake extracts have been studied for potential benefits in regards to a wide range of conditions. The extract has also been explored as an aid in treatment for septic shock, asthma, and autoimmune joint inflammation. [4]

Maitake extract has been shown to increase the production of fatty acids, which can increase energy and help keep arteries clean. In studies done on rats, maitake mushrooms also significantly lowered cholesterol levels and have been shown to lower overall blood pressure.

Maitake may be a good addition to any diabetes regime. A paper that studied the effect of maitake mushroom extracts on mice found that it can effectively control glucose and insulin levels by enhancing peripheral insulin sensitivity. While further studies are required the determine its effectiveness on humans, the present research certainly makes it an option to be considered. [5]

Many women take maitake extract to treat infertility due to polycystic ovary syndrome (PCOS) which also leads to insulin resistance. According to a research study by Dr. Chen JT et al., maitake extract helps improve insulin resistance levels and also stimulates ovulation in women with PCOS. Maitake may be an effective supplement when paired with traditional PCOS treatments. [6]

Maitake mushrooms are currently being studied in several studies for its potential cancer-fighting powers. Maitake extract is full of glucan polysaccharides, which may boost T-cell response to cancer cells, as well as boosting NK (natural killer) cell activity and stimulating cytokine production. Cytokines are coordinators during any immune response, working with each other to regulate the body’s reactions. Maitake D-fraction, a proteoglycan extracted from maitake, has been shown to assist cancer-fighting proteins in their effectiveness and may be useful in treating and preventing breast cancer. [7]

A 2009 trial at the Memorial Sloan-Kettering Cancer Center showed maitake extract supported certain immune responses in cancer patients. They have also been shown to slow the growth of tumors, regulate tumor genes, interrupt the processes of malignant cells, support the body during chemotherapy, and protect against bone marrow suppression. [8]

How to Eat Maitake?

Maitake mushrooms are available in several different forms. Fresh maitake mushrooms can be foraged in autumn months, or grown domestically. If you are buying it fresh, it is best to buy it whole for longer shelf life. You can add fresh maitake to Asian stir-fries and soups. Grilled maitake makes a delicious side dish to meat as they have a strong, earthy flavor. You can also be innovative and add it to omelets, pasta, and use it as a pizza topping.

Dried whole maitake may be available at specialty stores, and can be used for cooking or as a tea. However, more commonly, most people choose to use either maitake powder or capsules, which are available at most health food stores.

While some people have reported nausea or vomiting, overall there are very few side effects linked to intake of maitake.

Rate this article
Average rating 1.8 out of 5.0 based on 7 user(s).
Read This Next:
Popular Articles