The most effective and trusted home remedies for polycystic ovary syndrome include the use of saw palmetto, fenugreek, salmon, flaxseed, spearmint tea, cinnamon, licorice, broccoli, apple cider vinegar, and spinach.

Saw palmetto is one of the most effective herbs at inhibiting testosterone from converting into a more active form that will stimulate hirsutism. Hirsutism, which is essentially the growth of hair in strange places on a woman’s body is one of the most unsightly or visible symptoms of polycystic ovary syndrome. This is caused by the high levels of testosterone and androgenic hormones that characterize the disorder.

Saw palmetto is also considered an anti-androgenic substance, so it can help to reduce the number of the symptoms of polycystic ovary syndrome and actually re-balance the endocrine system. [1] 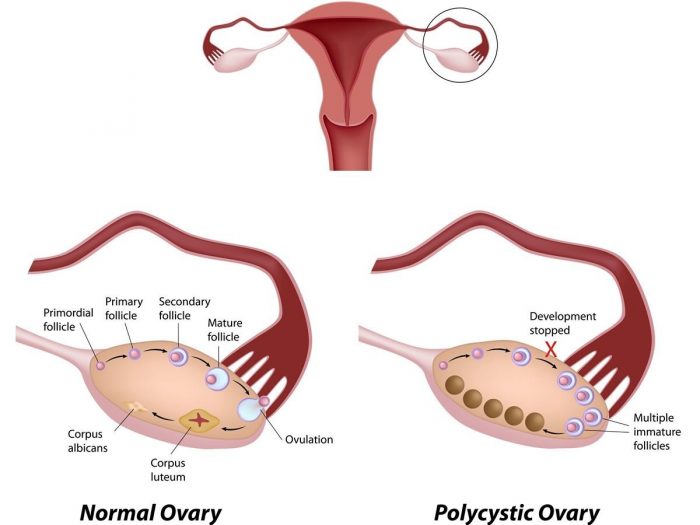 Fenugreek may protect those suffering from polycystic ovary syndrome from developing Type 2 diabetes. It may help optimize glucose metabolism in the body and ensure that insulin receptors operate normally, it can Furthermore, by regulating glucose metabolism, it can help to prevent weight gain and overeating, as nutrients will be used in an effective and timely manner by the body.

Flaxseed has two very important roles in the management of polycystic ovary syndrome. Firstly, flaxseed decreases androgen levels in the body, which is essential for women who want to avoid hirsutism. [2]

Secondly, flaxseed stimulates the production of sex hormone binding globulin, which binds with testosterone in the bloodstream, thereby preventing it from impacting other parts of the body and creating some of the secondary symptoms in women that can make life so difficult with this disorder.

The high levels of omega-3 fatty acids in salmon are the main reason why it made this home remedy list. Research has connected these essential fatty acids to a reduction in testosterone levels and a return to a normal menstruation cycle in women suffering from polycystic ovary syndrome. Although this research is still ongoing, the fact remains that the omega-3s found in salmon and other oily fish are also great for heart health, as they eliminate much of the “bad cholesterol”. [3]

Considering that the insulin resistance of polycystic ovary syndrome also affects the heart, salmon and its omega-3s actually may help in providing relief from this disorder.

Spinach and other dark, leafy green vegetables are packed with unique nutrients, including vitamin D, calcium, and magnesium, all of which are directly linked to relieving the symptoms of polycystic ovary syndrome. Calcium has been shown to improve menstrual regularity, magnesium improves insulin sensitivity, and vitamin D optimizes BMI, helping to prevent weight gain. [4]

Although many people turn to insulin therapy to ensure that their blood sugar remains stable, one of the best natural ways to keep diabetic symptoms under control is with chromium. Broccoli has more chromium than any other food source, so pop that into your diet and ensure that your insulin and blood sugar levels are optimized to prevent the onset of diabetes as a side effect of polycystic ovary syndrome. [5]

Cinnamon may not seem like an obvious choice, but in fact, cinnamon has been positively correlated with regular menstrual cycles and an increase in insulin sensitivity, making it a very valuable remedy that can be added to many different foods, or added to tea with honey for a delicious and beneficial beverage. [6]

Licorice attacks polycystic ovary syndrome from a number of different directions. Research has shown that one of the active ingredients in licorice inhibits a key enzyme necessary for testosterone production. Furthermore, licorice root can help to stimulate menstruation and it detoxifies the liver, which is closely connected to hormonal imbalance. [7]

Spearmint tea is directly linked to the relieving hirsutism, as research studies have shown that spearmint’s active ingredients can reduce total testosterone levels, and inhibit follicle-stimulating hormone, thereby helping to keep hair where it belongs on a woman’s body! [8]

Apple Cider Vinegar seems to be helpful for pretty much everything, but in terms of polycystic ovary syndrome, it can help reduce the insulin resistance and get your blood sugar behavior back to normal.

Apple Cider Vinegar is actually used to naturally manage diabetes all over the world, so it makes sense that it would be an effective remedy for those dangerous insulin symptoms of polycystic ovary syndrome.

A Final Word of Warning: While many of these home remedies will effectively clear up primary and secondary symptoms, it is still highly recommended to see a medical professional if you believe that you’re suffering from a hormonal imbalance, as an endocrine disorder can be much more complicated than it initially appears.

Rate this article
Average rating 4.1 out of 5.0 based on 103 user(s).
Read This Next:
Popular Articles