Mamajuana may sound like a made-up word to some of you, but it is a popular alcoholic drink in some countries, depending on where you’re visiting.

Mamajuana is an alcoholic drink that is native to the Dominican Republic. It is made by steeping rum, red wine, honey, tree bark, and herbs in a bottle. Many people wonder about the strength of this liquor, and yes, it is quite strong, although mamajuana recipes vary by producer. The proportions of wine to rum and the ABV of each will greatly affect the strength. This alcohol also contains lots of sugar and herbs, which can lead to a nasty hangover.

Expect about 30% alcohol by volume (ABV). The rum itself can vary from 80 proof to 160 proof, so a homemade variety could be quite boozy. 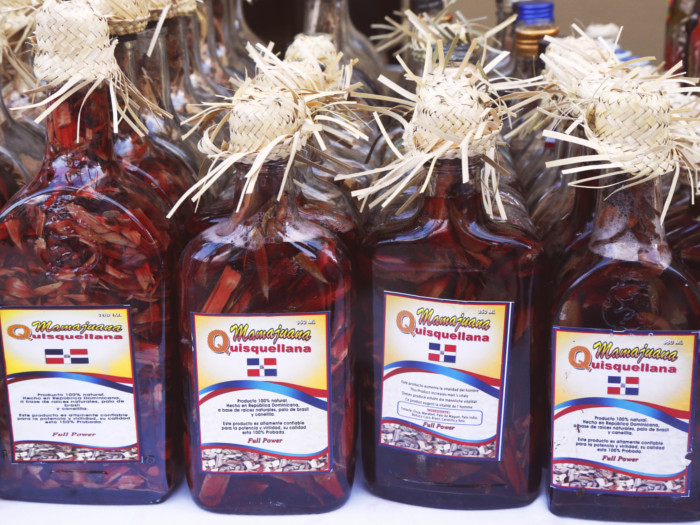 Mamajuana is native to the Dominican Republic. Photo Credit: Shutterstock

Dominicans praise mamajuana for its curative properties, and as a powerful aphrodisiac. It is referred to by locals as ‘Dominican Viagra’ or ‘the baby maker’. In traditional recipes, the key aphrodisiac ingredient is the penis of the Carey sea turtle – although this is left out of most commercial products for legal reasons. There is no science to support mamajuana’s aphrodisiac claims, and it could be argued that any type of alcohol will lower a person’s inhibitions when enjoyed in moderation. [1]

For use in traditional medicine, it is believed to aid digestion, improve circulation, be a tonic for the kidney and liver, and stimulate sexual potency. However, there is no research to back these health claims.

How to Make Mamajuana?

The herbs and bark are native to the Dominican Republic, but substitutes can be found in the United States. These can remain in the bottle for years as you add more rum and wine over time.

Whether it is a placebo effect or not, mamajuana is known to help people feel healthier and more stimulated. It can also cause people to feel overly drunk and hungover, so always limit your consumption to one ounce. [7] [8]

Adverse Risks Associated With Alcohol Consumption: There are several risks involved with excessive consumption of alcohol including violence, injuries as well as the incidence of chronic diseases. Alcoholism and binge drinking is detrimental to your overall health and can undo any possible good things that moderate amounts can impart. According to the Centers for Disease Control and Prevention, people who should not drink alcohol include women who are pregnant, individuals younger than 21 years of age, and people who are recovering from alcoholism or cannot control the amount they drink. Also, it should be avoided by people who are planning to drive or any other activity that required focus and skill. [9]

Rate this article
Average rating 3.6 out of 5.0 based on 4 user(s).
Read This Next:
Popular Articles