Moxibustion is an age-old Asian healing practice which has remained popular over the years for its potential to help with several conditions. But before you can rush to a practitioner to experience the benefits first-hand, you should know a few facts about this ancient practice.

Moxibustion is a traditional technique of healing which uses moxa cones to facilitate the flow of qi, the life energy. Moxa cones are small cones or cigars made of dried mugwort, also known as Artemisia. The procedure is conducted by burning moxa to transfer warmth along the body’s meridians, which are the lines of an imaginary network along which the qi flows.

Moxibustion is supposed to help the flow of qi. It can be conducted by burning moxa directly on the skin or a little away from it, depending on the condition being addressed, and the preference of the patient. Apart from this, another technique used is moxa wrapped and burned around acupuncture needles. This is said to deliver the heat under the skin, and thus more directly. 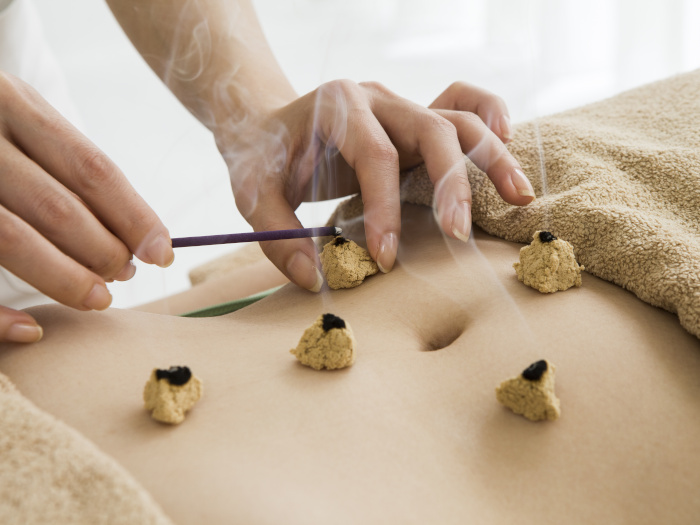 Moxibustion is supposed to help the flow of qi. Photo Credit: Shutterstock

Moxibustion is a healing practice originating in Asia, especially as a part of traditional Chinese medicine. A study of the history of this practice published in the Journal of Chinese Integrative Medicine suggests that the technique dates back to the period between 475 B.C. to 221 B.C. It also notes that the practice started expanding in the 1950s.

Why is Moxibustion Used?

One of the core beliefs that moxibustion relies on is the balance of hot and cold energies. By burning moxa on some critical points, the traditional Chinese medicine practice suggests that the body is supplied with hot energy, which would then balance out the cold energy. This balance of energy is sought for a healthy mind, body, and spirit, in eastern medicine practices, and can be achieved through such practices.

Here are a few conditions for which moxibustion is generally used:

Is Moxibustion Useful for Breech Presentation?

One of the primary practices where moxibustion is recommended by ancient medicine, and still used, is ‘breech presentation’. This is a condition where the fetus is positioned feet down, which makes vaginal birth difficult. The American College of Obstetricians and Gynecologists suggests that this happens in 3-4% of full-term births. Most of these cases opt for a cesarean section delivery.

However, practitioners of ancient medicine suggest that using moxa cones at an identified acupuncture point could reverse the breech baby. It can be performed at home and has to be practiced from the 33rd week.

However, not many studies exist to support the successful reversal of breech presentation through moxibustion, most of them providing mixed results. A study published in the Danish Medical Journal found this practice to have no effects in correcting the breech position in pregnant women when practiced after the 33rd week. Opposing conclusions were reached by another study which found that moxibustion for 1-2 weeks increased fetal activity.

Can I Practice Moxibustion at Home?

When practicing it at home, beware of the fire safety measures within enclosed spaces, as burning moxa generates smoke. Also, this smoke might smell like marijuana, so exercise caution.

It is recommended to find a certified practitioner when initially trying out moxibustion. While the ancient practice is generally considered safe, there have been a few reported side effects, such as:

However, these side effects are rare, and the practice can be altered or discontinued based on the patient’s experiences.

Moxibustion is an ancient practice and is best practiced by an expert or under expert guidance. It does offer several benefits, depending on your condition, health history, and the method being practiced. If you experience any side-effects, consult a medical practitioner immediately.

The Vegan Society says honey is not vegan & states that honey is made by bees for bees & that the health of the bees is compromised when the stored nectar is used by humans.

How To Make Poached Pears

Poached pears are served with a spice-infused syrup, giving it both character and flavor. We've added customization and serving suggestions for this classic fruit dessert.

15 Types Of Honey & How To Enjoy Them