What Is Peanut Butter

Put simply, what is peanut butter is the almost magical metamorphosis of the humble peanut into a miracle spread that pairs well with so many things. It is also the thing which, when added, might miraculously transform many food items. Or so it might seem so to an outsider who’s hearing it from a fan of this rudimentary nut butter.

What is Peanut Butter?

Peanut butter might sound like a complex derivation of peanuts, but contrarily, is quite simple. Peanut butter is a popular spread made by grinding roasted or plain peanuts into a paste. It is usually somewhat sticky and thick in consistency. Popular opinion suggests that this nut butter is quite tasty, considering that the average per-person, per-year consumption is 1.5 kg. It is used as a spread in sandwiches, on crackers and crepes, a dip for vegetables such as celery, and also baked into desserts such as cookies and brownies. [1] 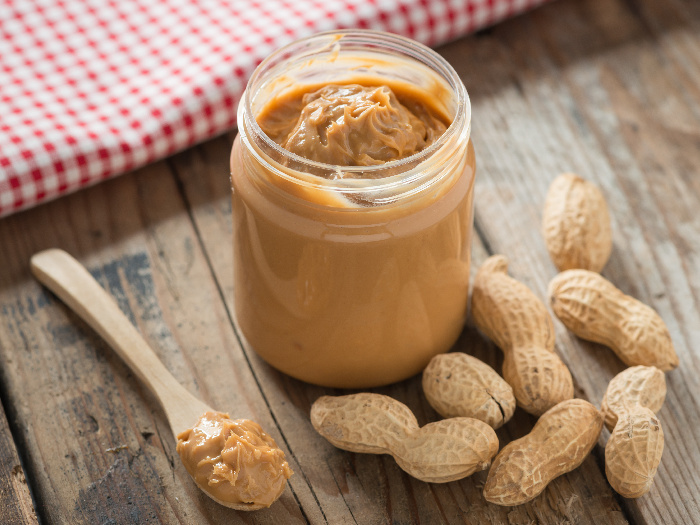 Peanut butter can be added to various recipes and had. Photo Credit: Shutterstock

While the basic version contains only peanuts, there are several variations available. Here are a few types of you should know about:

It is common to go for store-bought peanut butter as it is readily available and stays for longer. However, you could also make it at home. You could also customize it with additions such as sugar, chocolate, a small piece of jaggery, honey, and other nuts such as hazelnuts and almonds. The variations are subject to your imagination.

This is a question which several individuals making a conscious way-of-life choice would like to know about. Is peanut butter vegan-friendly? Yes, it can be considered by vegans as an option. Since the core ingredient is peanuts, with the possible addition being salt or sugar. Be sure to check the ingredients for additions such as honey. However, the best vegan choice is making your own.

Chances of having an empty jar are higher than having to worry about your peanut butter going bad. However, there’s not much to worry as an opened jar on the shelf can last for up to three months, and even longer in the fridge. This could depend on factors such as the temperature at which it is stored, the place, as well as the general weather. When dealing with store-bought nut butter, it is best to go by the expiration dates. In case of homemade ones, if you intend to use them for a while or have made a big batch, consider refrigerating them in airtight containers. [3]

The use of peanuts has been traced back to at least as far as 1500 BCE in South America, especially to the Incan civilization in Peru. On the other hand, peanut butter is far from a single-origin invention. It is suggested that grinding peanuts to make a paste was a practice in ancient South American civilization. However, it was not exactly the same as what we now know as peanut butter.

History got closer to peanut butter when around the late 1800s, not in South America but rather in Canada and the USA. It began taking off as a protein substitute for people who could not chew meat, especially senior citizens. What we now know as peanut butter is the evolution of a humble peanut paste into a popular ingredient, or what occasionally passes off as food.

Word of Caution: While it could be really tempting, peanut butter still contains peanuts. So, if you have a peanut allergy, it is best to stay away. [5]