Celery is a low-calorie vegetable that has powerful anti-inflammatory properties. It helps lower cholesterol levels and arthritis pain, quicken weight loss, protect against oxidative damage, and reduce high blood pressure. Including celery stalks in your diet can promote your overall health as it is rich in vitamin C.

Celery, an herbaceous plant of the parsley family (Apiaceae), has got a makeover over the last few years in health circles. Traditionally, the stalks and leaves were used to flavor soups and stocks. Prized for its low calories and high water content, celery stalks have been used as a low-carb snack option, usually accompanied by healthy fats like peanut butter and other kinds of nut butter. However, recent research revealed that this humble vegetable contains various medicinal properties such as antibacterial, anti-inflammatory, as well as the potential to lower blood glucose levels. This has led to the celery juice movement, the proponents of whom say that this green juice can cure skin irritations, aid in weight loss, and detox the body. [1]

The origins of this green vegetable most likely trace back to the Mediterranean and North African areas, since what is believed to be a rudimentary variety found in King Tut’s tomb, and a plant closely resembling it is referenced multiple times in Mediterranean myth and history. The plant is now cultivated globally and is a part of every cuisine from America and Ireland to Japan and Australia. 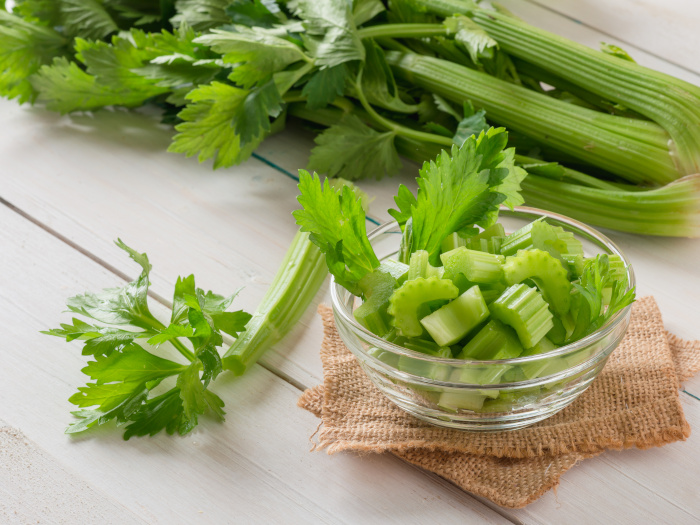 Celery can be used to flavor soups or stock and added to salads. Photo Credit: Shutterstock

According to the USDA Food Central Database, a medium stalk of celery (40 g) contains 5.6 calories and 1.2 g carbs. This makes it a universally loved low-calorie snack option. The stalk contains 38.2 grams of water and is great for hydration. 100 g of raw celery contains minerals such as calcium, magnesium, iron, zinc, and potassium. It also contains vitamins A, K, C, E, and B vitamins (thiamin, riboflavin, folic acid, vitamin, and vitamin B6). [3]

The health benefits of celery include the following:

Experimental studies show that celery can potentially help reduce inflammation in the body. A 2019 study suggested that celery leaves affect cytokines, which are immune system messenger molecules responsible for anti-inflammatory effects in the body. This is because the leaves have high levels of bioactive compounds such as apigenin, luteolin, and kaempferol. Researchers concluded that it can be a potential ingredient for the treatment and prevention of inflammatory diseases. [4]

A research study published in the Journal of Agricultural and Food Chemistry suggests that the fiber found in celery may help reduce artery-clogging cholesterol (called LDL or bad cholesterol). [5]

The phthalides in these vegetables also stimulate the secretion of bile juices, which work to reduce cholesterol levels. Less cholesterol means less plaque on the artery walls and a general improvement in heart health. The fiber that is found in it also works to scrape the cholesterol out of the bloodstream and eliminate it from the body with regular bowel movements, further boosting cardiovascular health.

Celery contains organic chemical compounds called phthalides. These compounds can lower the level of stress hormones in your blood. Also, a 2009 study revealed that it has hypolipidemic effects on your body that allow your blood vessels to expand, giving your blood more room to move, thereby reducing pressure. It also contains potassium, which is a vasodilator and helps in reducing blood pressure. When blood pressure is reduced, it puts less stress on the entire cardiovascular system and reduces the chances of developing atherosclerosis or suffering from a heart attack or stroke. [6] [7]

There is evidence showing that its extract has antibacterial effects as well which has further potential to prevent UTIs. A research study titled “Fruit and Vegetable Intake in Relation to Lower Urinary Tract Symptoms and Erectile Dysfunction Among Southern Chinese Elderly Men” claims that celery helps in reducing UTI symptoms in men as well. [8] [9] 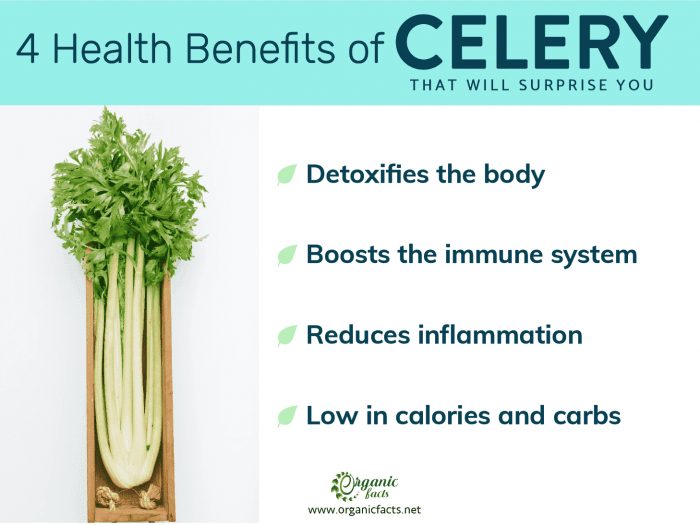 Celery, an herbaceous plant of the parsley family (Apiaceae), has got a makeover over the last few years in health circles.

Celery may help people suffering from arthritis, rheumatism, and gout. It has anti-inflammatory properties that help reduce swelling and pain around the joints. The extracts, which contain 85% 3-n-butylphthalide (3nB), are effective in giving relief from arthritis and muscular pains. [10] [11]

Because celery acts as a diuretic, it helps remove uric acid crystals that build up around the body’s joints that can add to the pain and discomfort. [12]

Rich in vitamin A and C as well as antioxidants, celery greatly boosts the immune system and makes it more active and efficient. Eating this vitamin C rich vegetable regularly can reduce your risk of catching a common cold, as well as protect you against a variety of other diseases. [13]

Vitamin C present in celery prevents free radical damage and also has anti-inflammatory properties that lessen the severity of inflammatory conditions like asthma. [14]

Evidence from the Journal of the American Medical Association suggests that vitamin C may have “a protective effect on the airways of patients with exercise-induced asthma.” [15]

Eating it raw regularly protects your organs from oxidative damage and helps to avoid diseases of the kidney, pancreas, liver, and gallbladder. [16]

As per a study published in the Phytotherapy Research [17] journal in 2019, the active ingredients in celery have shown hypolipidemic, antidiabetic, and hypotensive properties. This means that including these crunchy stalks in your diet can help you manage diabetes.

Celery contains high levels of calcium and magnesium; two minerals that have been shown to significantly reduce anxiety and perceived stress. Additionally, calcium plays an important role in triggering the release of neurotransmitters, which allow the brain to communicate with the body. [18]

It also contains coumarins, which studies have shown to have potential in treating several neurodegenerative disorders including Alzheimer’s, Parkinson’s, epilepsy, and more. [19] [20]

One cup of diced celery has only 14 calories, with about 1.5 grams of fiber. This makes it an excellent addition to salads or soups if you are on a weight loss diet. There are claims that it is a negative-calorie food, which means that you burn more calories than it has. However, there is no scientific evidence for the same. There is anecdotal evidence that celery juice can help boost weight loss – you can try our recipe: Celery Juice Benefits & How To Make.

How to Select and Store Celery?

Celery is readily easily available in markets all over the world. Choose a firm stalk that is green in color, has no discoloration, and has fresh and crisp leaves.

How to keep celery fresh: If you have bought bundles and want to keep them for future use, then put them in a zip lock bag. Store it in the refrigerator and use the stalks within 5-7 days.

How to Use Celery?

It can be used in salads, soups, and juices. Here are our favorite recipes:

The possible side effects of eating celery include:

Celery allergy: Celery is a common food allergen and the allergic reactions can range from oral contact urticaria to anaphylactic shock. The allergy can occur when it is eaten raw or cooked or as a form of a spice. People who are sensitive to celery may be sensitive to other herbs and spices too, usually called the Celery-Carrot-Mugwort-Condiment Syndrome. Celery consumption can also cause sensitivity to the sun. [21]

Skin irritations: Consumption of the vegetable or the juice consumption may cause allergic contact dermatitis (eczema), acute urticaria (hives), and angioedema (skin swelling) in some people. [22]

Pesticides: Celery features in the EWG’s Dirty Dozen list for 2020 for containing chemical pesticide residue, which could be potentially harmful to health. If you are drinking the juice made from raw celery, make sure each stalk is properly cleaned. EWG suggests buying organic or locally grown vegetables to combat the pesticide issue. Alternatively, it is better to cook the vegetables rather than eating it raw to avoid toxins. [23]

Gastrointestinal problems: Registered dieticians do caution people from excessive consumption of the vegetable for weight-loss reasons as it can cause diarrhea or bloating sensations due to its high fiber content.