Perilla oil is a popular ingredient in Korean cuisine due to its unique flavor and versatility in cooking.

What is Perilla Oil?

Perilla oil (Perilla frutescens) is an uncommon vegetable oil made by pressing perilla seeds, the seeds of a plant in the mint family that goes by the same name. It is commonly known as Japanese mint, Chinese basil, or shiso. The seeds of this plant are composed of 35 to 45% fats, many of which are beneficial to overall health. In fact, this oil has one of the highest concentration of omega-3 amongst vegetable oils. Furthermore, this oil has a unique nutty and aromatic taste, making it a very popular flavor ingredient and food additive, in addition to being a healthy cooking oil. [1]

In terms of appearance, this oil is light yellow in color and quite viscous, and is widely considered a healthy oil to use in cooking. Although it is primarily found in Korean cuisine as well as other Asian traditions, it is becoming more popular in the United States and other nations due to its health potential. [2] 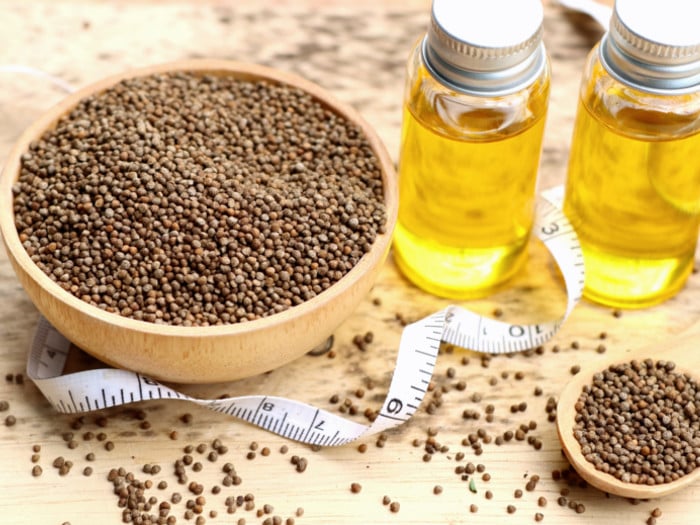 There are a number of impressive benefits of perilla oil, including its ability to fight against bacterial and viral infections, boost the health of the skin, and prevent allergic reactions, among others.

How to Use Perilla Oil?

Just like most vegetable oils, perilla oil is used in cooking, particularly for savory meals that could use a nutty and flavorful boost.

Perilla oil is known as healthy vegetable oil, but it still possesses saturated fat and can cause a number of side effects. When applied to the skin, some people experience topical dermatitis symptoms, at which point you should discontinue use. Fortunately, while using perilla oil powder supplements, it has been proven that extended use for up to six months is safe. That being said, before adding any herbal supplements to your health regimen, it is best to speak with a doctor about your specific health conditions.

Rate this article
Average rating 4.6 out of 5.0 based on 19 user(s).
Popular Articles