While you may have never used powdered milk before, it is a useful and convenient form of milk that has a high concentration of nutrients and is extremely versatile in various culinary preparations.

What is Powdered Milk (Dried Milk)?

Powdered milk is a type of dairy product in which regular milk is allowed to evaporate until it is completely dry, leaving only a nutrient-dense powder behind. There are many advantages to this dried form of milk, primarily that it cannot go bad or spoil, and that it is much lighter than milk in fully liquid form. This allows powdered milk to be transported much easier, in a more condensed form, so that only water needs to be added. This dry milk has potentially been in use for thousands of years, but it was only about 200 years ago that it became widely produced and available in some parts of the world.

Although the volume of this dried milk is much lower than regular white milk, it contains all of the nutrients you would normally find in milk, and it can be very useful in various confectionery and culinary preparations. [1] 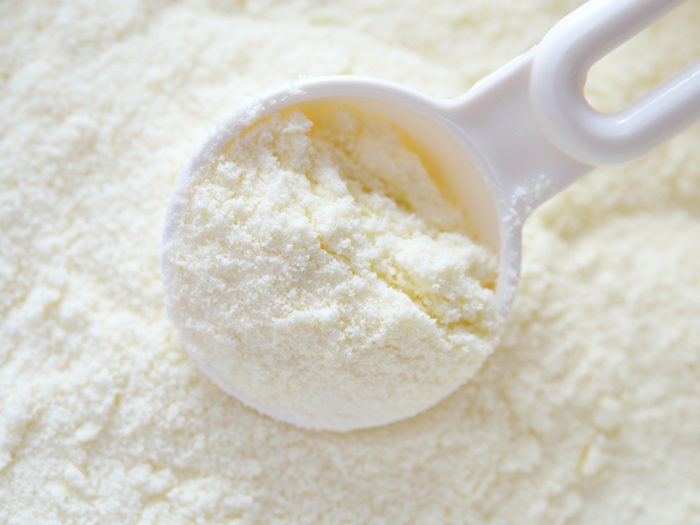 Powdered milk can act as a substitute for milk. Photo Credit: Shutterstock

There is a significant amount of nutrients in powdered milk, including all 21 primary amino acids that the body needs to create proteins. These powders are particularly high in protein, carbohydrates, calcium, and potassium, along with certain amounts of fat, depending on what type of milk is powdered. In a 2-tablespoon serving of this powder, there are only 26 calories, 4 grams of sugar, and a moderate amount of vitamin D and A. [2]

Powdered milk has a surprisingly wide variety of uses, including in the production of infant formula, sauces, yogurt, chocolate, whipped toppings, coffee creamers, curds, cottage cheese, and in milk baths for inflammation or irritation on the skin. Since all you need to do is add water to this dried milk, it has countless different applications in cooking. It can also be used to create face masks or added to other cosmetic and beauty products. [3]

While the benefits of powdered milk are clear, there are some things that need to be taken into consideration before using this variety of milk regularly.

Some of the benefits of this milk variant include its ease of use as a supplement. Since it can be so easily added to sauces, smoothies, and shakes, many people use powdered milk as a dietary supplement if they need a boost of protein or calcium. This variety of milk can also be stored for extended periods of time, without fear of spoilage, and it is also known for being quite cost-effective for those in lower income levels. [4]

There are some negative aspects of powdered milk, however, including the taste, which many people describe as overly chalky. Even when mixed with the appropriate amount of water, it tastes distinctly different than milk that hasn’t been dried out. Furthermore, due to the natural clumping nature of powder, it can be difficult to get a smooth mix of this powder into certain beverages or recipes. This can be less than appealing to drink or cook with, which is a common complaint about using powdered milk. [5]

Rate this article
Average rating 4.5 out of 5.0 based on 11 user(s).
Read This Next:
Popular Articles