For some pregnant women, PUPPS (Pruritic Urticarial Papules and Plaques of Pregnancy) is an irritating type of pregnancy rash that occurs towards the end of pregnancy. While it is apparently harmless to both the mother and the fetus, any unusual rash or change in your body during pregnancy can be worrying. Therefore, it is important for women to understand the symptoms, the causes, and potential remedies for this irritating condition.

PUPPS, as mentioned above, stands for Pruritic Urticarial Papules and Plaques of Pregnancy, but is commonly known as pregnancy rash. This condition is characterized by small red bumps or areas of irritation on the skin that appear near the beginning of the third trimester. These bumps may get more enlarged and eventually join together into a larger rash. They are typically on the stomach and back, but may also appear in areas where an excess of skin or fat has developed, such as near stretch marks. In some cases, PUPPS will appear quite late in the pregnancy, or even in the few days following delivery. [1] 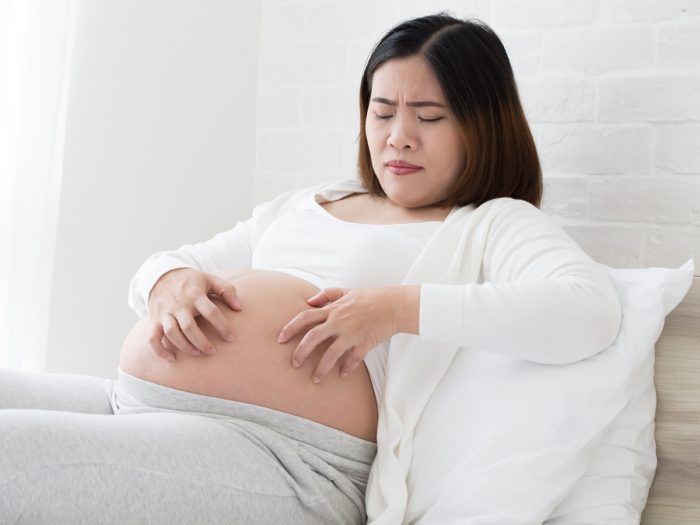 PUPPS affects approximately .5% of the pregnant population and is not known to be harmful in any way, neither to the mother or child. Research has found that the pregnancy rash tends to disappear soon after giving birth, and rarely remains after a few weeks of delivery. Despite the harmless nature of this rash, it can be very uncomfortable, on top of the many other stresses and challenges of late-stage pregnancy. [2]

The exact cause of PUPPS is unknown, and there has been a limited amount of research on the subject, but it is believed to be related to the mother’s immune system reacting to the cells of the fetus growing inside. Near the end of the pregnancy, when the fetus is growing very quickly, the skin is also stretching rapidly, which is why this rash often appears near the stretch marks.

Some of the other contributing factors appear to be gaining an excessive amount of weight during pregnancy, carrying multiples, and the gender of the child. PUPPS presents itself more often when the child is a boy. Research is ongoing to see how these factors can explain this phenomenon. [3]

The primary symptoms of PUPPS are small pimple-like dots on the abdomen and back, which may grow in size and join together, forming itchy, red plaques on the skin. In some cases, the rash will spread to the buttocks or thighs but rarely rise above the breasts to the neck and face. The worst thing about a PUPPS rash is the intensity of the itching, which can be anxiety-inducing and make it difficult to sleep. [4]

The appearance of these dots is common for pregnant women that a basic physical examination of your skin should be enough to determine whether the rash is PUPPS. In some cases, to ensure that another fungal infection or rash isn’t responsible, a simple blood test for cortisol levels, hCG levels and blood count will be enough to narrow the diagnosis. [5]

The most common treatments for PUPPS is to simply wait for the baby to be born, as the rash usually disappears shortly after delivery, and poses no threat to the mother’s long-term health. However, the irritation of the itching can be debilitating at times, so treatments like oatmeal baths, moisturizers, and antihistamine creams are often required.

These legendary anti-inflammatory baths are used for a wide variety of skin conditions, as they can soothe the irritated areas and take the “heat” from the itch. Blend 1-2 cups of oatmeal in warm bathwater and soak for 20-30 minutes for relief. [6]

There are many moisturizers that also offer anti-inflammatory benefits, which can help when your skin is flaring up with irritation. [7]

Since this rash is related to the immune system, an anti-allergy medication or cream can also lessen the irritation.

In some cases, it is impossible to prevent or avoid a flare-up of PUPPS, but be confident that it will pass eventually. If your tolerance for skin irritation is low, you’ll want to do all you can to prevent PUPPS, so you should try techniques like keeping your blood pressure under control and gaining weight in moderation. As mentioned, excessive pregnancy weight gain is directly linked to PUPPS, as is clear by the placement of the rashes. Additional research has also linked high blood pressure to a higher risk of this late-stage pregnancy rash.

Rate this article
Average rating 4.5 out of 5.0 based on 16 user(s).
Read This Next:
Popular Articles