Oatmeal isn’t just a popular breakfast dish, but its composition can help you optimize your health and start the day with a well-balanced meal. Oatmeal touts healthy heart benefits, cholesterol control, blood sugar control, and relief from constipation. It also has the potential to help to increase satiety and thus, decrease weight in those who are obese or overweight.

Oatmeal is prepared from oats, a type of cereal grain. Its botanical name is Avena sativa. Oatmeal is prepared by rolling, crushing, or grinding oats into a coarse powder. It can be prepared with water, milk or yogurt or it can be eaten in the form of pancakes, muffins, and cookies. Oatcake or oat bread is also eaten for breakfast or dinner, while oats are also used in the preparation of beverages. Oatmeal is popular today because of its numerous health benefits.

Oats have been known to man since the Bronze Age. Oats grow in cooler, moister regions of the temperate zones. They have a lower summer heat requirement and greater tolerance of rain compared to other cereals such as wheat and barley, which is why they are extensively grown in Europe and North America. Oats were mass-grown from the 18th and 19th centuries, and are particularly popular in Scotland, where historians have recorded many instances of oats being a part of the Scottish culture. As oats were very cheap, easy to grow, and process, people started consuming them like cereal. [1] 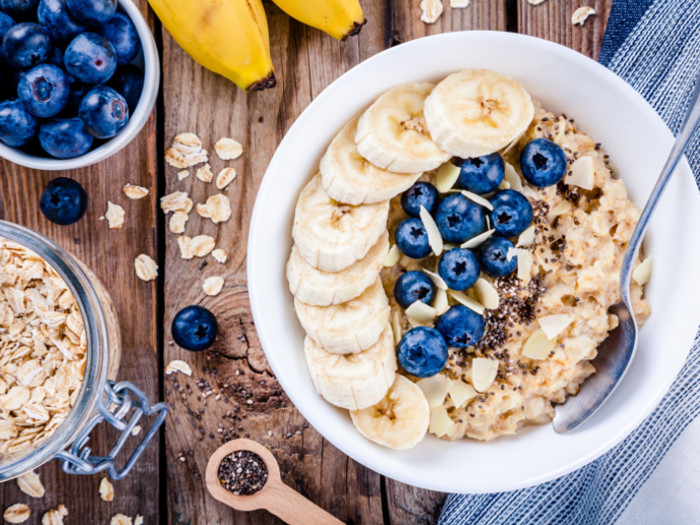 Oatmeal is prepared with the hulled oat grains. According to the USDA Nutrient Database, oats contain energy, protein and fat, in addition to dietary fiber, B-vitamins, iron, sodium, and calcium among others. Also, oats contain zero cholesterol. [3]

When it comes to healthy breakfast options, oatmeal surely comes up as one of the best choices. A 100 g serving of cooked oatmeal contains only 68 calories. It makes you feel for longer and helps you stay fit! [4]

Oats and oatmeal are gluten-free in nature. However, while growing and packaging, they may get cross-contaminated from various sources, thus leaving trace amounts of gluten. For example, sometimes, oats are grown in the same fields as barley and rye, or packed in the same facility as the other grains.  So, for those suffering from celiac disease or gluten intolerance, it is advisable to check the label before consuming it.

Oatmeal in your diet provides a wide variety of health benefits. Let us discuss these benefits.

Consumption of oats and oat-based products has been touted as a way to reduce the risk of cardiovascular diseases. Oatmeal has also been highly recommended by the AHA (American Heart Association) as part of a modified diet. According to a research published in Preventive Medicine, oatmeal acted as a great component of a fat-modified diet and helped in reducing the serum cholesterol level, including both HDL (good cholesterol) and LDL (bad cholesterol) in the body. [5]

A study performed on diabetics at the University of Heidelberg, Germany, showed that oatmeal consumption decreased the blood sugar level significantly in this population. One reason this was attributed to was that a high fiber diet and complex carbohydrates took a longer time to digest than simple carbohydrates. This helps in maintaining optimum blood sugar levels. In the study, an oatmeal diet was given to patients in the replacement of other cereals. [6]

Oatmeal is a good source of dietary fiber, which makes it ideal to overcome constipation by stimulating the digestive process and moving food smoothly through the intestinal tract.

Oatmeal is highly recommended for people who want to increase satiety and lose weight without going on any crash diets. Oatmeal contains high amounts of dietary fiber, and nutrients, and is relatively nutrient-dense when considering the 150 in calories and low-fat content in a 1/2 cup dry serving, which makes it a great food for weight loss.

Usually, the diet recommended for hypertension is known as DASH (Dietary Approaches to Stop Hypertension). Research showed that regular (unsalted) oatmeal consumption helped in reducing the risk of high blood pressure – along with a diet low in sodium, and rich in lean protein and produce. [7]

Oats and oat-based foods, like oatmeal, have often been linked to decreasing the chances of cancer. [8]

Research conducted by Dr. Weiman Guo found that inflammation plays a significant role in the development of cancer. It also shows that dietary polyphenols, like avenanthramides – found in oats, have anti-inflammatory and anticancer properties that may help lower the risk of cancer. [9]

The British Journal of Nutrition [10]has published research revealing the study reveals that whole-grain foods like oats and oatmeal may help in protecting against the development of colorectal cancer. Although more research is still awaited, the results look quite promising.

Adding oatmeal to a child’s diet early on in their life can reduce the risk of asthma. It may also help in preventing the onset of other allergic conditions among children. Further research is needed to confirm these benefits, however. [11]

Oats can be a good source of antioxidants, with polyphenolic compounds and most importantly a unique group of compounds called avenanthramides. There is also vitamin E (tocols), phytic acid, flavonoids, and sterols in oats. The concentration of these antioxidants is on the outer layer of oats and it helps the body fight free radicals, which can often lead to chronic and inflammatory diseases, such as cancers, GI disorders, and cardiovascular disease. [12]

Oats can also be used as remedies for various skin diseases. They can be applied to the skin to reduce the symptoms as well as the actual diseases. It is thought that some conditions, such as acne, dermatitis, chickenpox, and stress rashes can benefit from topical application of oats and oat baths. [13]

Oats are rich in soluble fiber, called beta-glucan, which has been linked to reducing the LDL, blood sugar, and insulin levels in the body. This also promotes digestion by increasing the production of good bacteria in the gut and promotes the feeling of fullness, or satiety.

Studies have shown that oatmeal can also be consumed by those with celiac disease, as it only contains very limited quantities of gluten. Moderation would be advised though [15]

Some of the vitamins found in oatmeal include B-vitamins thiamin, riboflavin, niacin, vitamin B6, and folate, as well as vitamin E and vitamin K. These nutrients are essential to increasing the strength of the immune system. Vitamin E is helpful in breaking down complex lipid compounds into simpler compounds. Vitamin K acts as a blood coagulant and helps in maintaining bone health. With such benefits, including portion oatmeal as part of a healthy diet acts as a powerful way to improve your health and lifestyle. [16]

How to Select & Store Oats?

Choosing the right type of oats can be a tricky part, as there are various kinds of oats available on the market, such as steel-cut oats, old-fashioned oats, quick-cooking oats, and instant oats.

Oatmeal can be prepared in a number of ways that can be done quite easily at home.

Other oatmeal ideas include banana oat smoothie, oat and strawberry fondant, oat cookies and biscuits, and more!
So what are you waiting for!? Go and dig into this savory and healthy dish!

Rate this article
Average rating 4.2 out of 5.0 based on 133 user(s).
Read This Next:
Popular Articles