Many people recognize the nutritional value of radish, but radish seeds are also a dense source of nutrients and are a popular food in certain countries. Before including a new health food in your diet, it is best to understand what it contains, where it comes from and some of the potential health benefits it may hold.

What are Radish Seeds?

Radish seeds come from the radish plant and some varieties of radish are cultivated solely for their sizable seed production and seed pods. These seeds can be allowed to sprout, like many other seed types, such as mung beans. The freshly sprouted seeds are a very concentrated source of nutrients, many of which can have powerful effects on your overall health. The seeds can be eaten by themselves or can be used in the production of radish seed oil.

For centuries, if not longer, various Asian cultures have cultivated radish seeds for their unique health effects, and for their delicious flavor when added to salads and other dishes. In China, radish seeds are considered a type of herbal remedy and are known as Lai Fu Zi in Mandarin. The seeds are flat ovals, reddish-brown in color, and about 3 millimeters in length. [1] 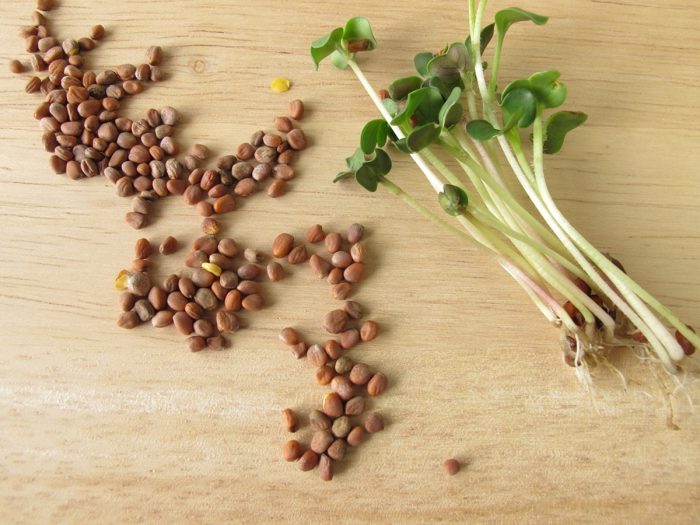 Radish seeds are widely praised for their nutrient composition, which includes notable levels of vitamin C, folate, magnesium, phosphorous, manganese, copper and protein. They also have as many antioxidants and organic acids, such as linoleic acid, linolenic acid, erucic acid, and sinapine. Additionally, there are only 16 calories in a cup of these seeds. [3]

The healthy amount of B vitamins and vitamin C, as well as various minerals and antioxidants, helps to improve the health of the skin by reducing oxidative stress. This can also relieve dry and cracked skin and lessen the appearance of lines and wrinkles, as well as age spots and blemishes. [4]

Certain flavonoids found in radish seeds are able to protect your cardiovascular system from coronary heart disease and can lower your blood pressure. This further reduces your risk of high blood pressure, heart attack, and stroke. [5]

One of the most notable minerals found in radish seeds is calcium, which is a key component in bone health and the prevention of osteoporosis. There are also lesser amounts of other critical minerals for improving bone mineral density found in these seeds, such as phosphorous, manganese, and copper.

For centuries, radish seeds have been prescribed as a traditional remedy for kidney stones, thanks to their diuretic properties. This can help to break down clumps of oxalic acid and other hardened stones in the kidney, while regularly flushing the kidneys and detoxifying them. [6]

Similar to these seeds’ effects on the kidney, they can also stimulate the function of the liver and reduce the levels of toxins in your blood. However, as more toxins are filtered through the liver, it becomes less efficient. Research has shown that the active ingredients in radish seeds can help to clear out the “blockage” in the liver filter and improve overall health and metabolic functions. [7]

Like most seeds, radish seeds are high in dietary fiber, which is one of the most important components for digestive processes. Not only can fiber bulk up the stool, thus preventing diarrhea, it can also stimulate peristaltic motion, which moves food through the gut smoothly, keeping you regular. Finally, dietary fiber can also lower cholesterol levels and regulate blood sugar. [8]

One of the most exciting developments in the study of radish seeds is their potential to have certain positive effects against cancer. The radish plant is a source of isothiocyanates such as sulforaphane, which a 2017 study associates with cell cycle arrest and apoptosis in human breast cancer cells. The possible anti-proliferative capacities of this isothiocyanate, isolated from the radish seed, against several types of cancer was also noted by a 2018 research. [9] [10]

While it will require further studies for radish seeds to develop into a significant part of cancer care, including them moderately in your diet seems like a good idea!

Rate this article
Average rating 4.2 out of 5.0 based on 113 user(s).
Read This Next:
Popular Articles