If you haven’t added rice vinegar to your health regimen, you’re missing out on a calorie-free ingredient that is highly flavorful and offer a number of other health benefits.

What is Rice Vinegar?

Rice vinegar is a vinegar derived from fermented rice, primarily popularized in Asian countries like Korea, Vietnam, Japan, and China. While each of these countries has slightly different versions of rice vinegar, the basic components are the same. Most notably, vinegar made in Asia are less acidic than those found in other countries of the world, which is why they are more often used in culinary applications. White or brown rice is typically mixed with some sort of fermentation starter, and then natural processes are then allowed to proceed, resulting in the vinegar.

Due to its unique chemical makeup, this type of vinegar is used in many different foods, medicinal applications and even cleaning products. The rich supply of active ingredients and potentially beneficial compounds makes it an excellent addition to any healthy diet. More importantly, it is known to bring out the natural flavor of certain foods and dishes, so it is often added as a culinary complement to specific meals. [1]

Although most people think of rice vinegar solely in terms of cooking, it also provides a number of health benefits, such as boosting immunity, regulating blood pressure, preventing infection, and detoxifying the body, among others.

This vinegar can be applied directly to the skin, particularly when mixed with tea tree essential oil. This can act as an astringent to tighten the skin and prevent certain infections, while also soothing inflammation and improving the radiance of your skin. [2]

This type of vinegar is rich in certain amino acids that are critical to your immune system’s function. By using this vinegar, rather than other common forms, you can strengthen your immune system and reduce free radical activity. [3]

Research has shown that rice vinegar can slow the deposition of cholesterol in your arteries and blood vessels, helping you avoid heart conditions like atherosclerosis, heart attacks, and strokes. [4] 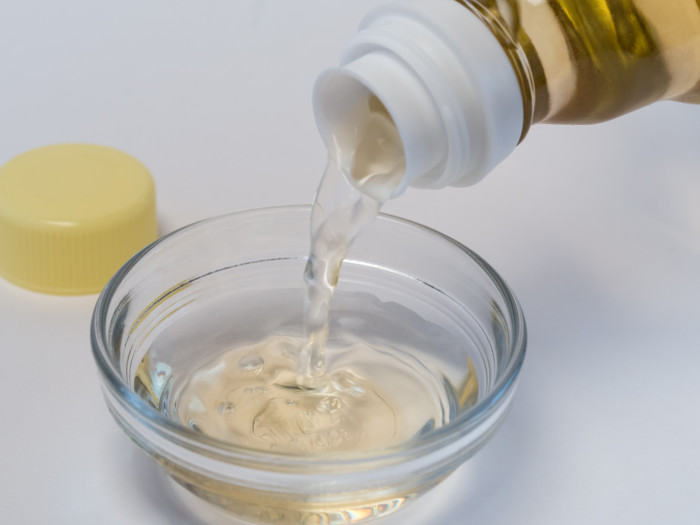 Rice vinegar is a type of vinegar made from fermented rice. Photo Credit: Shutterstock

Some of the active ingredients, such as acetic acid, found in rice vinegar are able to soothe inflammation in the gut, while also promoting normal peristaltic motion and bowel movements. [5]

For centuries, rice vinegar has been popularly used in Japan as a tonic for the liver. It is believed to increase the detoxifying effects of this organ and ensure that it functions normally. [6]

There are key amino acids and other active ingredients in rice vinegar that can help your body fight off fatigue and give your metabolism a boost precisely when you need it. Using this vinegar as a salad dressing halfway through your day can help give you the added boost you need for the afternoon. [7]

What many people don’t understand is that rice vinegar is actually the same as rice wine, but it has been allowed to ferment for a longer time, leading to rice wine vinegar. It is most popularly used when you want to add a dash of sour to a dish, but it is also found as a key ingredient in sushi rice, as well as in the pickling process of many vegetables and other products in Asia. Many people use this as a topping for French fries, in their stir-fries, or as a spicy ingredient in marinades.

It is also very good when added to salad dressings or other dips for vegetables and meat. Those are the primary culinary uses, but for cleaning purposes, it can also be used as a detergent. Some people also use it as a natural treatment for various health conditions.

If you don’t have rice vinegar, some of the best substitutes are apple cider vinegar, balsamic vinegar, red wine vinegar, or white wine vinegar. Similar to the production of rice vinegar, these are substitutes that have been allowed to ferment to the point where they take on certain health benefits, as well as a strong, astringent flavor.

Each has a slightly different flavor, but within a dish, it is often hard to tell the difference between these options.

Rate this article
Average rating 3.8 out of 5.0 based on 53 user(s).
Read This Next:
Popular Articles