The powerful antioxidant content of vinegar equips it with many amazing health benefits including diabetes control, blood pressure control, improved heart health, and prevention of kidney stones, among others. It has antimicrobial properties, helps in improving the body’s acid-alkaline balance, protects against oral bacteria and may also prevent cancer.

Vinegar is a sour liquid that is prepared by fermenting alcoholic liquids, and it mainly consists of acetic acid and water. The acidic content of vinegar makes it an ideal ingredient for cooking and for household purposes. It has also been used as a health tonic and has a variety of medical benefits.

The name ‘vinegar’ comes from the French words “vin” and “aigre”, which means sour wine. It was mainly produced from apples, which is why it was popularly known as apple cider vinegar, but since then it has been produced from beer, sugarcane, rice, malt, coconut, palm, dates, raisin, honey, and kiwi. As a condiment and flavoring agent, it is used in pickles, vinaigrettes, marinades, sauces, and many other things and food items. [1] [2] 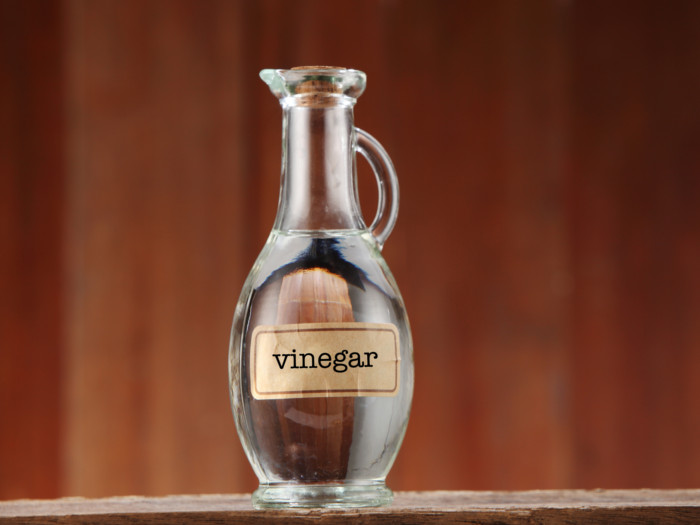 Vinegar is used in cooking not only for its flavor qualities but also its chemical properties. Photo Credit: Shutterstock

According to the National Nutrient Database for Standard Reference, 100 grams of cider vinegar consists of 94 grams of water, 21 kcal of energy, about 1 gram of carbohydrates, 0.4 grams of sugar, 7 mg of calcium, 0.2 mg of iron, 5 mg of magnesium, 8 mg of phosphorus, 73 mg of potassium, 5 mg of sodium, and 5 grams of acetic acid. [4]

This age-old ‘sour wine’ provides many benefits. Here are some of the health benefits of taking vinegar regularly.

It is helpful for diabetics. A study published in the Journal of Diabetes Research on its effects was conducted on type 2 diabetic subjects. The research revealed that it had a stimulating effect on insulin in diabetics and in case of insulin-resistant people, it helped in raising insulin sensitivity. [5]

The presence of a compound called chlorogenic acid in it prevents the occurrence of LDL (bad) cholesterol. This helps in the reduction of overall cholesterol and triglyceride levels in the body.

A study conducted by a team of Japanese researchers on the effects of vinegar on human cancer cells showed that vinegar from unpolished rice, when administered to various human cancer cells ranging from the colon, lung, breast, bladder, and prostate, controlled the growth of the cancer cells. The inhibition depended on doses for each type of cancers. [6]

It possesses antimicrobial properties. Studies showed that wood vinegar is effective in controlling the growth of microbial cultures.

It can be used as an additive in certain foods that some people are allergic to. Tests on foods such as eggs, chicken, and lentils mixed with small quantities of vinegar were conducted. Food extracts with vinegar were tested on people suffering from anaphylactic food allergies. Sample tests on the skin showed decreased signs of allergic reactions compared to food extracts without it. However, a doctor’s advice is recommended in such cases, as food allergies could sometimes be fatal if treatment is not given on time.

Vinegar, with its acid content, can help mitigate the condition of acid reflux and thereby prevent heartburn.

Taking two tablespoons of it every day can help reduce high alkalinity in the blood. Alkalinity is increased by regular metabolism, which has to be balanced by acid, thereby making it a good choice for treating kidney stones and preventing urinary tract infections (UTI).

Vinegar is also useful in reducing glycemia. Research has shown that its addition to a high glycemic meal has positive effects on the reduction of postprandial glycemia. [7]

In many cultures, vinegar was thought to improve immunity and was associated with longer life and strength. Studies administering it to rats have shown quite encouraging results. [9]

Below are mentioned some of the other benefits.

Box jellyfish are regarded as one of the most venomous creatures on the planet. The tentacles of this creature contain venomous glands, which are triggered by the slightest touch and inject one of the worst venoms that nature has ever synthesized. One of the first methods of treating this venom is with vinegar. It breaks down the venom into harmless proteins. [10]

Note: It can act as first aid but immediate medical attention is also required.

The antimicrobial properties of vinegar are helpful in controlling oral bacteria, which is often found in dentures and in various gum and oral diseases. [11]

It is best suited for keeping your hair healthy. By applying a teaspoonful of apple cider vinegar on the scalp, one can remove dandruff, itching scalp, hair loss, and in some cases, baldness. [12]

Applying it on the skin is recommended for healthy and glowing skin. Take half a cup of apple cider vinegar and mix it with at least 1 liter of warm water. Now, apply this mixture gently on your skin. Your skin will become soft as the pH level begins to re-balance. It can also clear away dead skin cells and harmful toxins that have been deposited on your skin. This mixture can also work well for sunburn. [13]

How to Make Vinegar?

Vinegar is produced in a way much similar to wine. It is produced by fermenting ethanol with the help of acetic acid bacteria. As the main ingredients of it were not known scientifically in ancient times, the process remained a mystery until the 18th century, when scientists made a discovery about micro-organisms. Until then, wine and vinegar were thought to be a gift of nature. The discovery of microorganisms and their role in wine-making and vinegar-making revolutionized the way they both are produced.

Rate this article
Average rating 4.2 out of 5.0 based on 186 user(s).
Read This Next:
Popular Articles