Although most people think of sour milk as a bad thing, it is actually a popular cooking ingredient that can add a unique flavor to a number of common recipes.

What is Sour Milk?

For the past 10,000 years, humans have been milking animals in some form as a nutritious beverage. When some of that milk began to sour, or become acidified, it was noticed that the taste wasn’t necessarily “bad”, just different. The fermentation of raw milk or the addition of an acid to raw milk will result in sour milk. Sour milk is distinguished from milk that has spoiled, which typically happens to pasteurized milk that has no bacterial cultures present. This milk is derived from raw milk, which allows for fermentation and culturing. [1] 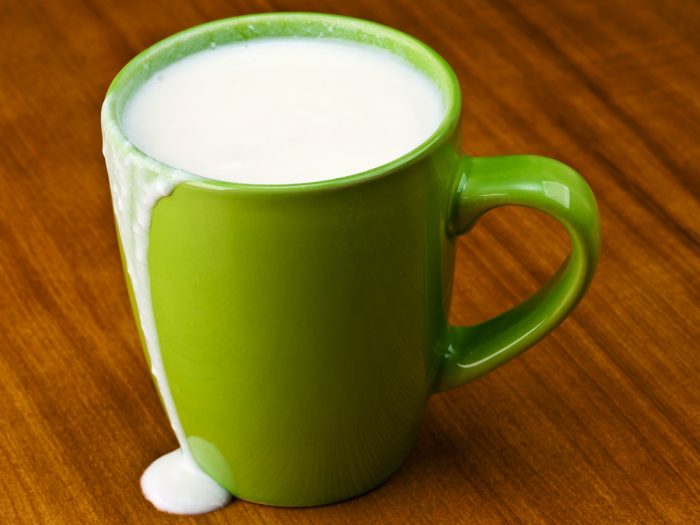 Sour milk filled till the rim of a green mug Photo Credit: Shutterstock

As the milk begins to sour, a chunk may start to appear, and the texture will become noticeably thicker. In some ways, it may begin to resemble yogurt or cheese curd. Depending on what country you live in, fermented milk may be a very common beverage or a frequent ingredient in cooking and baking. This type of dairy product is particularly popular in Scandinavian and Baltic countries, although different forms exist around the world. [2]

There are many benefits to sour milk which may also include its effects on digestion, immune system, heart health, and toxicity in the body, among others.

The bacterial cultures found in this fermented milk may help your stomach break down food more easily, and will help to prevent constipation, bloating, and cramping. There may also be less lactose in sour milk, making it ideal for those with lactose intolerance. [3]

Studies have found that sour milk may help to stimulate the function of the liver and pancreas, thus helping to eliminate more toxins from the body. [4]

This type of fermented milk may possess a wide range of nutrients, vitamins, and active ingredients that the immune system needs to function, including vitamin A, zinc, potassium, selenium, iodine, and calcium. [5]

Fermented milk may have been found to have less of an allergenic effect on those who are sensitive to milk; it may help to suppress unnecessary immune responses.

Research has shown that regular consumption of sour milk may help lower overall cholesterol levels, which can aid in improving heart health and lowering your risk of heart attacks and strokes. [6]

The most popular uses for sour milk are in culinary applications, skin care, cheese-making, and even as a specialty pet food! In cooking and baking, it adds a sweet element, while its active ingredients and fermented nature make it a useful component in certain cosmetic products.

Rate this article
Average rating 3.8 out of 5.0 based on 262 user(s).
Read This Next:
Popular Articles