There are many different types of figs, and while they all share some similarities, the differences in nutrient profile, appearance, and taste are important to understanding.

There are hundreds of different fig varieties, but the most common types of figs include black mission figs, brown turkey, sierra figs, calimyrna figs, and kadota figs, among others. [1]

These are some of the most common and readily available fig varieties in the world, and while they originated in Spain, they are now widely available throughout the world. They are comparatively small and have dense pink flesh, as well as a sticky and chewy consistency that makes them a popular snack food and ingredient in various sweet preparations. [2] 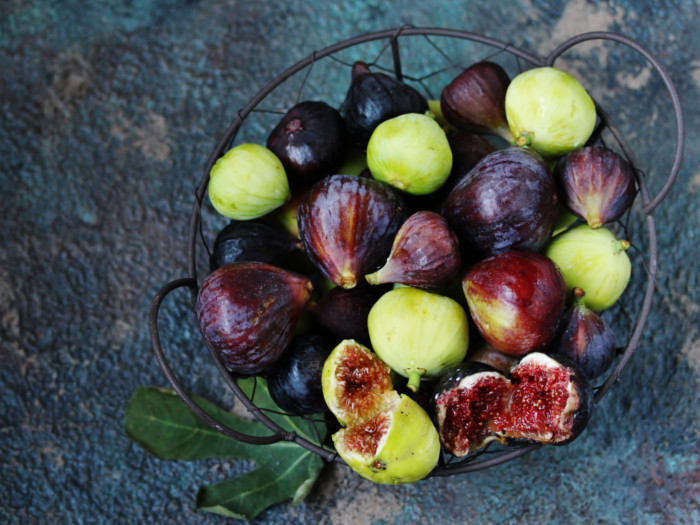 Figs are a great source of fibre & full of vitamins and minerals. Photo Credit: Shutterstock

Arguably the most widely cultivated and consumed figs in the world, these fruits are somewhat elongated and have a light brown skin. This variety of figs has been popularly cultivated for the past 300 years in parts of Europe and America, and are often what people imagine when they picture a fig. It can be difficult to determine when these figs are ripe, but they should possess a creamy and sweet taste. [3]

These figs are unusually light in color, typically a pale green or yellow, earning them the nickname white figs. However, these fruits are very sweet and have bright red flesh inside. These figs are often candied or eaten on their own, due to their exceptional flavor.

Grown primarily in Southern California, these figs have light green or yellow skin, as well as a rich amber color inside. The flavor of these figs is particularly unique, with nuttiness and a hint of sweetness. However, since these particular figs are more fragile and prone to spoilage than other varieties, they are commonly dried and sold as candies, rather than being purchased in their fresh form. [4]

Similar to calimyrna figs, sierra figs have a green exterior, although they are typically larger than calimyrna varieties. This is a rather new variety and did not grow in the wild until 2006. Breeders designed this variety of fig for its size and flavor, although it is not popular in various parts of the world.

This ancient variety of figs is believed to have been consumed or cultivated as far back as ancient Rome, although they now grow extremely well in Southern California. Large and green, these are extremely common. [5]

Rate this article
Average rating 4.2 out of 5.0 based on 36 user(s).
Read This Next:
Popular Articles