Valerian root is one of the most commonly sold ingredients in the market today. But little do people know that this ordinary herb can also have beneficial effects on anxiety, stress, and sleep. Research suggests that valerian root can help you relax, release nervous tension, and treat insomnia. Let’s take a look at how valerian root for anxiety and sleep works in detail below.

What is Valerian Root?

Valerian is a perennial plant belonging to the Valerianaceae family, native to Europe and Asia. The root has a distinct odor that many people find unpleasant, as per a report published in the NIH. Valerian, with the scientific name Valerian officinalis, is one of the 250 species belonging to the Valerian genus and also the most commonly used one in the whole of the United States and Europe. According to data, this root was used in ancient Greece and Rome as a common remedy for insomnia, nervousness, headaches, and stress. It is available in various forms in the market today – in the form of capsules, powder, tablet, extract, tea, and more. [1] 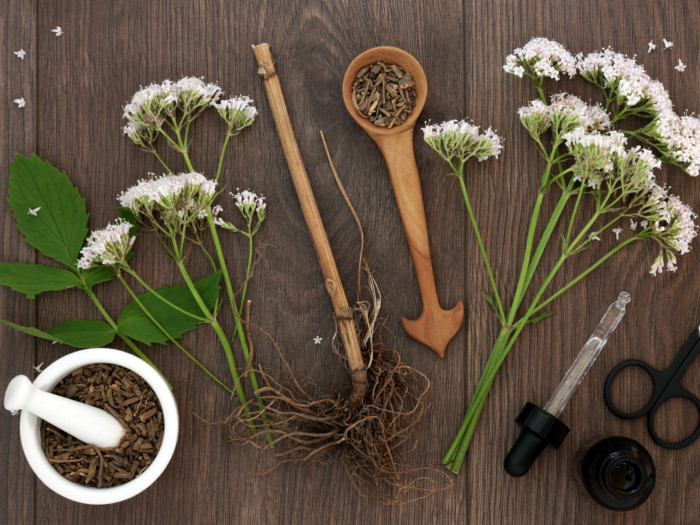 How is Valerian Root Effective for Anxiety & Sleep?

The results in regards to the efficacy of valerian root for anxiety and stress are mixed. There are some studies that suggest it is effective and then there are studies which do not give enough proof. We have discussed some of those studies below.

According to one study published in the journal Neuropharmacology in 2009, valerian extract contains valerenic acid and valerenol, both of which are known to have an anxiolytic effect in the body. This is why valerian root has been used for restlessness and anxiety to good effect. [2]

Another study published in the journal Pharmacology Biochemistry and Behavior showed that this root had a significant impact on improving sleep quality among people who were poor sleepers, smokers, or experienced longer sleep latency. Researchers also think that this effectiveness of valerian may be a result of the increase of GABA levels in the brain caused by it. GABA is a chemical which has a calming effect in the body. Most of the prescription drugs for anxiety and insomnia, like Xanax and Valium, also work by increasing the GABA levels in the brain. [3] [4] [5]

One randomized control trial, involving 36 individuals with an anxiety disorder, studied the effects of valerian and diazepam (a drug for anxiety). The study results were in favor of diazepam for anxiety, however, both the groups displayed the same set of side effects; thereby providing insufficient evidence for the efficacy of valerian for anxiety. [6]

However, a systematic review done on the nutritional and herbal supplements for anxiety and anxiety-related disorders, published in the Nutrition Journal  [7]in 2010 lists valerian as one of the herbs effective for anxiety – while calling in for more research evidence in this regard.

As per a study published in AAFP [8] in 2003, a single dose of 400mg of the aqueous extract of valerian showed significant improvements in sleep patterns in individuals suffering from poor sleep. A higher dosage was shown to have resulted in day time sleepiness. You can also try valerian tea for insomnia.

Note: Please consult your doctor before you make valerian root extract or tea a regular part of your routine.

A dosage of 50mg of valerian extract, three times daily, for four weeks is recommended as it is shown to cause a significant reduction in the anxiety levels. Another research showed that a daily dose of 600mg for seven days reduced the systolic blood pressure, heart rate reaction, and stress. [9]

Note: Please consult your doctor before you take valerian root for anxiety or make it a regular part of your routine.

Valerian root is sold as a dietary supplement in the United States, and dietary supplements do not come under drugs or medications, therefore FDA approval for this root is not required, as per a report published by the NIH. However, generally categorized as safe for consumption, valerian root can have a few side effects. They include the following: [10]

This root can also make you drowsy, so it is advised not to operate a vehicle or any heavy machinery after consuming it. Taking valerian root may also be risky in the below-mentioned cases.

It is very important to discuss it with your health care professional or doctor before you consume valerian or any other kind of dietary supplement.