Vegetable glycerin is a water-soluble sugar alcohol derived from various plant oils that can be used in a variety of cosmetic, nutritional, and medicinal applications.

What is Vegetable Glycerin?

Vegetable glycerin is widely available in a number of plant oils, such as coconut, soy, and palm oil, and is the polyol molecule that forms the backbone of glyceride lipids. This colorless and odorless liquid has a sweet flavor and a viscous consistency when separated out from plant oils. Hydrolysis is the process by which glycerin is made, in which the oils are subjected to intense pressure and temperature, at which point the ester bonds of the lipids break, and the glycerin is absorbed by the water present. Distillation then separates out the constituent parts, leaving pure glycerin as the final product!

Glycerin, also known as glycerol, has a number of unique qualities, which has made it a popular ingredient in the cosmetic and skincare industry, as well as in food production and alternative medicine fields. Although plant oils have been widely used since ancient times, the process for extracting glycerin wasn’t available until the 20th century. A significant amount of study and research has gone into the qualities and potential applications of glycerin. [1]

Many uses of glycerin have been identified over the years, thanks to its humectant (attracts moisture), emollient, anti-inflammatory, and sweetening qualities. The main industries vegetable glycerin finds use is in food production and the realm of cosmetics and skincare. 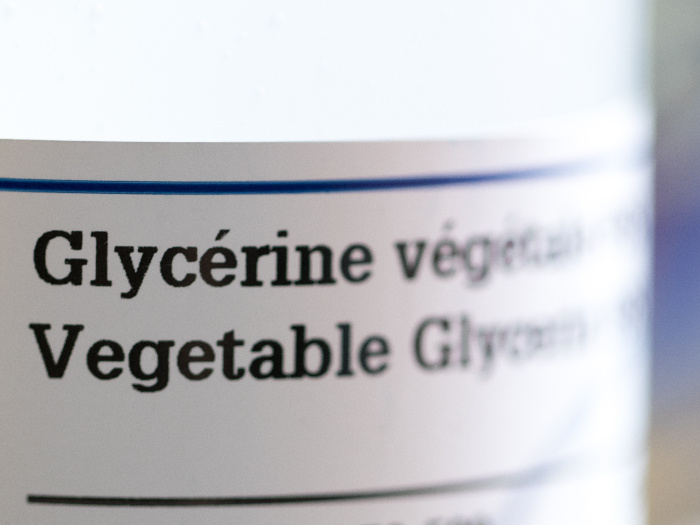 Due to the inherently sweet nature of glycerin, it is popular for use in food production, particularly as a sweetener in low-carbohydrate foods, in order to replace sugar. It also helps to thicken foods and balance moisture content, since it is a humectant substance. You will often find glycerin as an ingredient in baked goods, processed meats, ice cream, frozen foods, soybean products, condensed milk, condiments, and beverages. Unlike traditional sugar, glycerin does not lead to tooth decay, making it useful for sweet drinks and sodas. [2]

The more widespread use of glycerin, however, is in toiletry and skincare products, as well as natural medicines and therapeutic salves. Due to its humectant properties, any topical substance that contains glycerin will help to keep the skin hydrated, as it attracts moisture. Therefore, you often find this ingredient in lotions, moisturizers, shampoos, shaving creams, toothpaste, soap, deodorant, and makeup. It can be used in acne creams and salves, as well as body scrubs, aftershave lotions, and conditioners. It is used to lessen the appearance of scars, and may also appear as an ingredient in heart medications, suppositories, and cough medicines, among others. [3]

There are many benefits of glycerin, including its ability to boost skin health, manage blood sugar, reduce constipation, improve energy levels, increase hydration, and eliminate inflammation.

Despite its wide-ranging benefits, there are some side effects of vegetable glycerin that must be considered.

Stomach ailments: Though it is generally considered safe, you may experience some gastrointestinal symptoms, such as gas and diarrhea, when you consume it in supplemental quantities.

Allergic reactions: Furthermore, some people may be allergic to glycerin, or the plants from which the oil was initially derived, which could result in redness, irritation or other allergic reactions on the skin.

Other common symptoms include nausea, dizziness, and vomiting have also been reported in some people. The best practice is to speak with a doctor or medical professional, and then start with small quantities, whether you are consuming it in food or applying it to the skin.