Vermouth is a traditional fortified wine made with a range of interesting herbs. Made in France and Italy, this fortified red or white wine is a popular cocktail base.

Vermouth is an aromatic wine fortified with botanical herbs, roots, and flowers. The word ‘vermouth’ is the French interpretation of the German word, ‘Wermut’, which stands for the herb. The taste of this alcohol varies greatly according to the chosen infusion, but some of the most common flavors are ginger, cinnamon, citrus peel, and juniper. Slightly stronger than other fortified wines, vermouth tends to range between 16% and 18% ABV. [1]

Sweet vermouth originated in Italy and was used medicinally or consumed as a dessert wine. Dry vermouth, also known as ‘white vermouth’, developed in France during the 18th century as a paler and drier alternative to the sweet version. Both are added to cocktails, such as Martinis and Manhattans. [2] 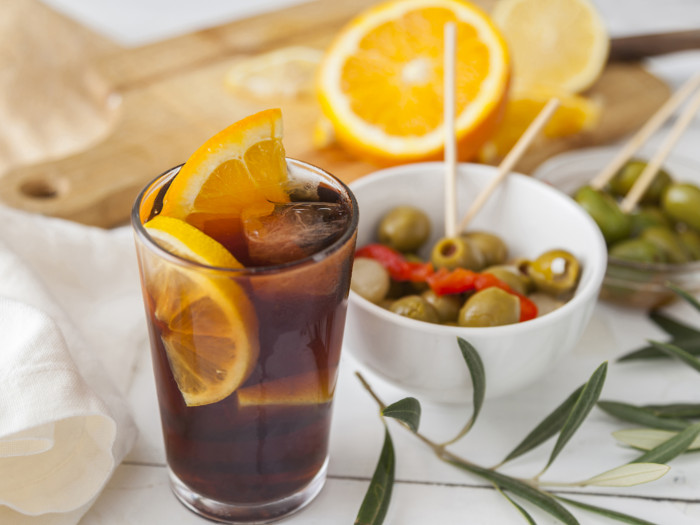 Vermouth is used to make classic cocktails like a martini or negroni. Photo Credit: Shutterstock

There are many different varieties of vermouth, they include the following:

Calories in one glass of this potent liquor can vary from approximately 30 calories to 150 calories, with the sweeter types being at the higher end of the spectrum. Each serving contains 1-2% carbohydrates.

Due to the wide range of herbs used in the production, there are a number of potential health benefits that this beverage can offer when drunk in moderation. These include the following:

However, these are not backed by science and are based on anecdotal evidence. If alcohol is consumed, it should be done in moderation. Alcoholism and binge drinking is detrimental to overall health and can undo any possible good things that moderate amounts can impart.

The process to make vermouth wine is quite simple. It involves the following steps:

How to Store Vermouth?

Like other red wines, store unopened bottles of this alcohol in a cool, dark place.

When consumed in excess, as with any alcohol, vermouth can alter the body’s sugar levels and cause intoxication. Be wary of wormwood-infused versions of the beverage as the herb has highly adverse effects on some people. Consume this alcohol in moderation to avoid long-term damage to the liver and other aspects of your overall health. [8]

According to the Centers for Disease Control and Prevention, people who should not drink alcohol include women who are pregnant, individuals younger than 21 years of age, and people who are recovering from alcoholism or cannot control the amount they drink. Also, it should be avoided by people who are planning to drive or any other activity that required focus and skill. However, different countries have different rules on alcohol purchase and consumption. [9]