What Is White Meat

White meat is what most fitness enthusiasts turn to for a low-calorie, high-protein option. The most common form of white meat is cooked chicken breast, with turkey breast coming a close second. White meat cooks faster than other cuts and kinds of meat and is also healthier due to its low fat and high lean protein content, according to the Academy of Nutrition and Dietetics.

What is White Meat?

White meat generally refers to poultry meat that is pale in color before it is cooked, such as chicken breast and turkey breast. It can also include other poultry such as duck and geese. Traditionally, fish is also termed as white meat, even though certain kinds of fish like salmon and tuna are red in color. On the other hand, meat from four-legged animals such as beef, pork, and lamb are considered red meat. [1] 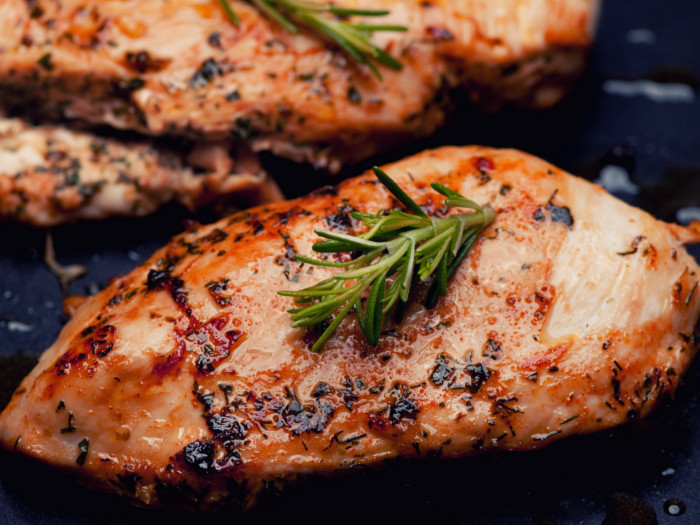 Chicken thighs, turkey thighs, and drumsticks are considered dark meat and they take longer to cook as compared to white meat. Dark meat comes from muscles that use more oxygen and contain more iron, which is held in a protein called myoglobin. Since chickens and turkeys are flightless birds, their legs are exercised more than other birds as they walk a lot, making the muscles darker in color. On the other hand, the muscles next to their wings are used for short bursts of energy such as the sudden flapping of wings. Due to this, their breast muscles have less myoglobin and are paler in color. [2] [3]

According to the USDA Food Safety and Inspection Service, the meat of older animals can be darker in color because the myoglobin level increases with age. Also, the same animal can have color variations in its muscles. [4]

Pork is red meat as it contains more myoglobin in its muscles than chicken or turkey. Also, it is classified as “livestock” along with lamb and beef and all livestock are considered red meat. The US National Pork Board ran an advertising campaign in 1987 called “Pork: The Other White Meat” to position pork as a healthy option for protein. According to a study conducted by Northwestern University, the campaign was the fifth most recognized message in the US in 2000. The campaign was successful and led to an increase in pork sales. However, pork is red meat and it is also still termed so by the US Department of Agriculture. [5] [6] [7]

What is the Best White Meat?

Chicken breast, turkey breast, and fish are the best white meat, in terms of calories, protein, and fat content. According to the USDA National Nutrient Database, one skinless, boneless, cooked grilled chicken breast (196 grams) has 296 calories, 30.5 g of protein, and 3 grams of fat. [8]

White meat is considered to be healthier than red meat because it is low on saturated fat and people generally avoid red meat if their cholesterol levels are high. However, a 2019 study published in The American Journal of Clinical Nutrition revealed that white meat can raise cholesterol levels as much as red meat. [12]

The study, called APPROACH (Animal and Plant Protein and Cardiovascular Health), evaluated 113 healthy individuals who were given a primarily red meat diet (mainly beef), a white meat diet, and a plant-based diet (legumes, soy products, nuts, and grains) for 4 weeks. While the people in the red meat group had more total and LDL cholesterol levels that people in the other two groups, both kinds of meat – red and white meat – raised the LDL cholesterol levels. The researchers stated that it is best to have diets with a higher proportion of plant-based foods.