What is Tuna Fish?

Tuna fish is a very diverse saltwater fish that belongs to the Scombridae family, commonly called the mackerel group. Within this family, tuna belongs to a tribe, called Thunnini. This tribe contains 15 species of tuna, several of which are enjoyed around the world in culinary traditions. [1]

This variety of fish are typically anywhere from 1 foot in length to 15 feet for a fully grown, long-lived example. While most of these fish live for 3-5 years, some have been known to live for more than two decades. They regularly make long migration across the oceans, sometimes thousands of miles in length, due to mating and changing seasons.

Tuna fish of varying species are found in all of the world oceans, and while different cultures enjoy different varieties, the health benefits are largely the same. Their delicious taste, global availability, and healthy components make them an ideal replacement for red meat or for those who like to add some healthy fish variety to their diets. There are some species of tuna, however, that are endangered and should be avoided. If sustainability is important to you, look for tuna bearing the blue MSC label from the Marine Stewardship Council. According to the MSC, “Tuna carrying the blue MSC label is certified sustainable. MSC labeled tuna comes from a fishery that has been independently assessed to the MSC Fisheries Standard…. Canned, fresh and frozen MSC labeled tuna products can be found throughout the world.” [2] 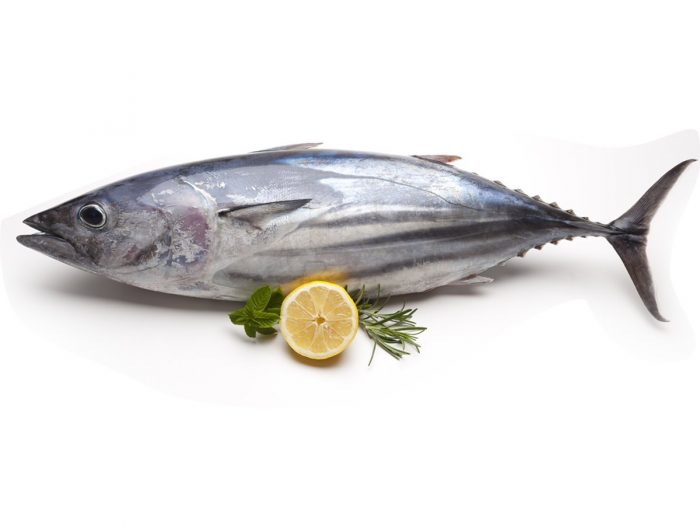 The health benefits of tuna fish can be attributed to the impressive content of vitamins, minerals, and organic compounds found in this delicious fish. These include antioxidants and protein, without much-saturated fat or sodium. It also has impressive levels of selenium, phosphorous, iron, magnesium, and potassium, according to the USDA National Nutrient Database. In terms of vitamins, there is a wealth of vitamin B12 and niacin, as well as a good amount of vitamin B6 and riboflavin. [4] [5] [6]

Now, let’s explore more of the health benefits of tuna fish that these components confer.

Perhaps the most common health benefit that is attributed to tuna fish is its significant impact on heart health. In terms of reducing coronary heart diseases, this fish has high levels of omega-3 fatty acids, which help reduce omega-6 fatty acids and LDL or bad cholesterol in the arteries and blood vessels. Furthermore, it often replaces foods with high saturated fat content, further lowering the risk of heart diseases. According to a study published in the Journal of the American Medical Association, women who consumed higher amounts of fish, including tuna, and omega-3 fatty acids have a lower risk of coronary heart disease. [7]

The anti-inflammatory omega-3 fatty acids can help reduce blood pressure. Potassium, found in tuna, is a vasodilator and is very good for lowering blood pressure. Reducing hypertension can significantly boost your health by lowering the strain on your cardiovascular system. This will help prevent heart attacks and strokes, as well as conditions like atherosclerosis. [9]

Tuna fish, being rich in omega-3 fatty acids, is a great option for preventing eye disorders like age-related macular degeneration. Paul A. Sieving, M.D., Ph.D., director of the National Eye Institute (NEI), and John Paul SanGiovanni, Sc.D., were involved in a comprehensive research study on dietary omega-3 fatty acids in protecting against the development and progression of retinal disease. [10] This disease is the major reason behind the occurrence of blindness in elderly people. The blindness is also caused due to diabetic complications and this fish can help in reducing the chances of diabetic retinopathy.

Tuna fish is packed with high levels of protein. A single serving of only 165 grams (approximately 1 can of tuna fish) contains more than 80% of your daily protein requirement. Proteins are the building blocks of our body that guarantee growth, faster recovery from wounds and illnesses, improved muscle tone, and overall metabolic efficiency. [11]

Tuna fish is low in calories and fat, yet loaded with beneficial nutrients like protein. The omega-3 fatty acids found in this fish may stimulate a hormone called leptin, which balances the body’s food intake with the internal desire to eat more. This can reduce overeating and make sure that your body is only consuming what it actually needs. According to a study published in the European Journal of Clinical Nutrition, omega-3 is associated with increases in leptin in people with obesity. Increased leptin may help prevent these individuals from regaining weight following weight loss from calorie restriction. [12]

Tuna contains a good amount of vitamin C, zinc, and manganese, all of which are considered antioxidant in nature. Antioxidants are one of the body’s defense mechanisms against free radicals, the harmful by-products of cellular metabolism that cause chronic diseases. However, the real champion of tuna’s immune system-boosting potential is selenium. This fish is rich in this mineral, giving nearly 200% of the daily requirement in a single serving. This makes the fish a very powerful antioxidant and immune-boosting food. [13] [14]

The B complex vitamins in tuna have been connected with a wide range of health aspects. They are directly involved in energy metabolism, increasing the efficiency of organs, protecting the skin, and increasing energy levels. B group vitamins act as cofactors to enzymes and speed up these metabolic reactions, allowing them to produce energy at the rate we need. By consuming this fish regularly, you can ensure that you are active, energetic, and healthy. [15] [16]

Tuna is a rich source of iron, along with the B-complex vitamins that play an important role in red blood cell formation. Without iron, people become anemic and their blood is unable to adequately oxygenate the vital organs that need fresh oxygen to function efficiently. [17]

Tuna fish has antioxidant properties, thanks to selenium and other nutrients, making it effective at preventing some types of cancer. In the American Association for Cancer Research, a study titled “A 22-year Prospective Study of Fish, n-3 Fatty Acid Intake, and Colorectal Cancer Risk in Men” suggested that fish consumption, especially the fatty fish variety, may decrease the risk for colorectal cancer. [18]

The potassium and sodium content in tuna is well-balanced, meaning it is high in potassium and low in sodium. This helps manage the fluid balance in the body. When your body maintains a fluid balance, the kidneys function properly, thereby lowering the chances of developing serious kidney conditions.  However, for individuals with chronic kidney disease, be sure and speak with your doctor or dietitian before adding tuna or making any major alterations to your diet. Tuna contains both potassium and phosphorus which can build up and become toxic in people who have damaged kidneys. [19]

Tuna fish can keep the body’s overall stress levels down by reducing inflammation, thanks to the anti-inflammatory vitamins and minerals. A reduction in inflammation across the body ensures an enhanced functioning of all organs. It also helps prevent inflammatory diseases like arthritis and gout, both of which afflict millions of people around the world. [20]

When tuna fish is cooked, the proteins in it begin to break down into fragments, called peptides. These fragments can actually be powerful antioxidants that specifically target cell membranes, keeping them healthy, strong, and functioning properly. Free radicals often attack membranes throughout the body, including those in the brain, so eating cooked tuna and improving membrane protection is a very good idea! [21]

Consuming fish, or for that matter, any fish, above a certain limit can bring the mercury level in our body at an unhealthy point. Studies have shown that there is a unique form of selenium, called selenoneine. This actually binds to mercury and acts as an antioxidant, slightly changing the composition of mercury to make it less dangerous. However, studies are still ongoing to completely validate this. Due to its health benefits, regular consumption of fish is recommended despite mercury content. To minimize exposure to mercury, avoid long-lived fish that tend to have more mercury build-up including king mackerel, swordfish, and tilefish. Canned tuna (usually the species are known as skipjack), is safe to consume as well as most other species of tuna, however frequent consumption of bigeye tuna should be avoided as they tend to be higher in mercury. [22] [23] [24]

Due to its content of omega-3 fatty acids, the intake of tuna fish is good for relieving depression. Findings of a research study suggest that fish consumption may be beneficial for women’s mental health. It can also reduce depression levels in women. According to a meta-analysis published in The Journal of Clinical Psychiatry, there is strong evidence showing that omega-3 may alleviate symptoms of bipolar depression. [25] [26]

The taste of tuna fish makes it perfect for eating as a steak, as a spread with mayonnaise on crackers or bread, in a salad, on a sandwich, and more. It is versatile, delicious, inexpensive, and healthy.

Word of Caution: The most common danger of eating too much of this fish is the risk of mercury poisoning, but as the above-mentioned studies are hinting at, this may not be as much of a health problem as we thought, as long as you are avoiding bigeye tuna which tends to be higher in mercury.

Other than that, tuna is a wonderfully delicious and beneficial part of any diet. Time to go fishing!

Rate this article
Average rating 3.9 out of 5.0 based on 434 user(s).
Read This Next:
Popular Articles