Rosemary: Benefits, Uses, and Side Effects

This herb is considered to be sacred by ancient Romans, Greeks, Egyptians, as well as Hebrews and is particularly prevalent in Italian cultural cuisine. It is also known as ‘Dew of the Sea’ or ‘Old man’.

Rosemary is a fragrant, woody herb native to the Mediterranean region. Its scientific name is Rosmarinus officinalis and it belongs to the Lamiaceae family, with other herbs, such as thyme, oregano, lavender, and basil. It has fine needle-like leaves with a silver touch and pink, purple, white, or blue flowers.

Rosemary has a warm, bitter, and astringent taste. Unlike many other herbs that lose their potency when dried, rosemary retains its taste even in the dried form. It gives a wonderful flavor and aroma to soups, sauces, stews, and chicken roasts.

Rosemary is rich in nutrients that help boost your immunity, reduce muscle pain, and improve your memory. Many people also use it for hair growth. It is available in many forms from fresh and dried to powdered forms for cooking. Rosemary tea, extracts, and essential oil are also used for these benefits. [1]

According to USDA, fresh rosemary has a very high reserve of vitamins such as vitamin A, vitamin C, vitamin B6, thiamin, and folate. It contains minerals like magnesium, calcium, and iron. Moreover, it has abundant antioxidants in the form of phenolic compounds like diterpene, carnosol, and rosmarinic acid. The essential oils in it contain powerful ingredients such as cineol, camphene, borneol, bornyl acetate, α-terpineol, and α-pinene. [3] [4] [5] [6]

Aside from the nutrients mentioned above, the herb contains dietary fiber. It is low in cholesterol and sodium but high in saturated fats.

The top health benefits of rosemary include:

One study showed that in test subjects with colitis, treatment with rosemary extract was effective to reduce colon tissue lesions and colitis. This, in turn, helps maintain gut health and fight gut diseases like irritable bowel syndrome (IBS) and colitis. [7] [8]

Rosemary has traditionally been used as a natural remedy for upset stomach, constipation, gas, bloating as it helps in relaxing the muscles of the intestine. Adding it to your diet can help you regulate your bowel movements and your gastrointestinal system. [9] [10]

May Aid in Hair Growth

A comparative study published in 2015 shows that rosemary oil is effective in treating alopecia by boosting hair growth. At six months, a significant increase in hair count was noted for the group treated with rosemary oil. It also promotes healing by increasing microcirculation of the scalp and decreases hair loss after shampooing. [11]

To know more, check out our guide on the Benefits of Rosemary Oil for Hair and How to Use it.

Carnosol and carnosic acids are two powerful compounds found in rosemary. These compounds have been linked to reducing inflammation of muscles, blood vessels, and joints. This may make it an effective treatment and preventive measure for many diseases, including gout, arthritis, and injuries from physical exertion or surgery. [12] [13] 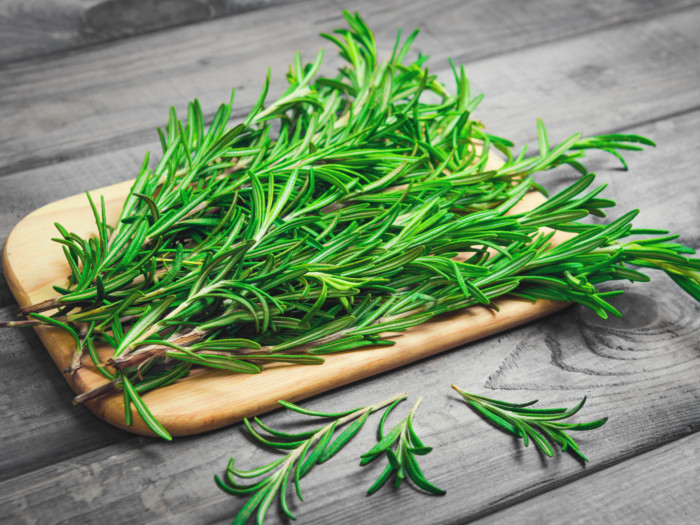 One of the earliest documented uses of rosemary was as a cognitive stimulant. [16] [17]

Evidence shows that it may help improve memory alertness, intelligence, and focus.

As per a research study, rosemary prevents beta-amyloid plaques and suppresses acetylcholinesterase (AChE) activities. These actions are associated with the symptoms of Alzheimer’s, ataxia, and dementia. It has also been linked to stimulating cognition in the elderly as well as those suffering from other acute cognitive disorders. [18] [19] [20]

The carnosic acid in rosemary has neuroprotective properties. A 2016 study suggests that it helps to reduce oxidative stress and enhances the synthesis of nerve growth factor which is vital for nerve tissue. [21]

Rosemary has been used for its protective effect on the liver in traditional medicine. [22]

A 2015 animal study published in the Saudi Journal of Biological Sciences revealed that extracts of the leaves of rosemary and olive helped in reducing liver cirrhosis, due to their potential antioxidant activities. [23]

Rosemary may have a calming effect on those who suffer from anxiety and depression.

An animal study conducted on the antidepressant effects of rosemary concluded that the herb is effective in improving the symptoms of depression. These beneficial effects were observed even with repeated administration two weeks later. Furthermore, it may also reduce cortisol (the stress hormone) levels, which helps ease tension in the body. [24]

A randomized controlled trial performed on students suggested that rosemary may help in improving sleep quality. [25]

While it may be therapeutic as alternative medicine, if you are suffering from symptoms of depression, stress, or irregular sleep, consult with your doctor before trying out this herb.

The antioxidants in the essential oils of rosemary help improve skin health. It has a potentially anti-aging effect and helps heal blemishes and may increase the natural shine. Also, its extracts with citrus supplements prevent skin against UV light damage, much better than the supplements alone. [29] [30]

In a research study on the effects of rosemary extracts on skin damage, Dr. Alice L. Pérez Sánchez states that the herb actually helps protect you against UV-induced damage through its antioxidant effects. [31]

According to another study, carnosic acid-rich rosemary can be used as a preventive treatment for metabolic disorders. [35]

May Have Antibacterial & Antimicrobial Abilities

Rosemary is specifically powerful against bacterial infections. It is linked to preventing staph infections, which are highly contagious and can cause lethal boils and blisters. It also eradicates various gram-negative and gram-positive bacteria completely. [36]

Due to its antibacterial qualities, rosemary intake has been shown to prevent the growth of H. pylori bacteria, a dangerous pathogen that is associated with gastritis, and stomach ulcers. [37]

How to Use Rosemary?

Rosemary comes in various forms like fresh leaves, dried leaves, oil, and extracts. As it has a strong flavor, use it sparingly in your dishes. Mentioned below are some of the ways to use it.

Although the plant is classified as safe by the FDA even at higher concentrations, its long-term excessive use has side effects like:

Note: If you are allergic to other members of the mint family, you may experience discomfort if you consume or apply rosemary or its oil, but the reactions are typically mild.