There are many beneficial forms of oil for culinary and therapeutic purposes, but apricot kernel oil is one that many people don’t even know exists. Before adding this unique oil to your health regimen, however, you must understand where it comes from and what potential benefits it holds for your health, as well as any side effects you may experience.

What is Apricot Kernel Oil?

As the name suggests, apricot kernel oil is derived from the kernel (e.g. seed, pit) of an apricot, the fruit of the apricot tree, scientifically known as Prunus armeniaca. While there are several different species called apricot, they have very similar nutrient profiles, as does the oil contained within their kernels. Using a cold-pressing method, apricot kernel oil can be removed from the hard pit in the center of the fruit.

This oil is quite light and has a nutty, aromatic flavor, making it a popular addition to many culinary efforts in certain parts of the world. In some cases, people replace almond oil with apricot kernel oil for cooking and medicinal purposes. There is a high concentration of oil in each kernel and has likely been in use for thousands of years, given its multiple applications in Chinese traditional medicine. There are two different varieties of apricot kernel oil – one used for cosmetic purposes and the other for culinary consumption. This oil has high levels of vitamin E, vitamin K, and many powerful antioxidants, such as caffeic acid and various catechins, all of which lead to the many health benefits of this oil. 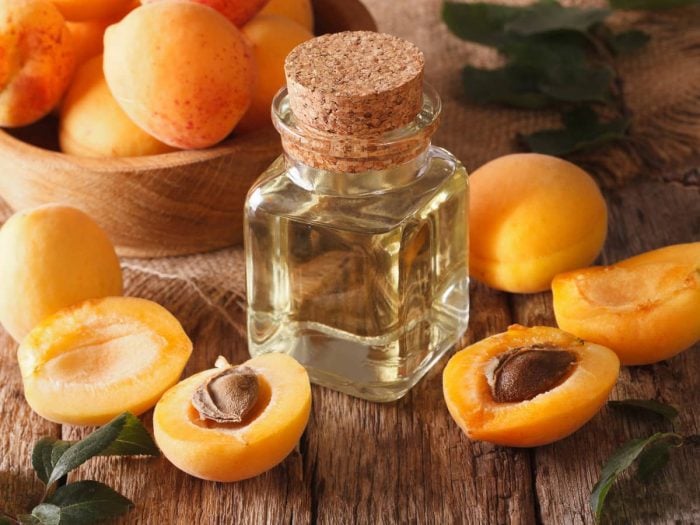 There are quite a few notable health benefits of apricot kernel oil, including its ability to moisturize the skin, protect the hair, reduce symptoms of acne, and reduce the risk of certain types of cancer, among others.

When topically applied, the emollient properties of apricot kernel oil can help exfoliate and moisturize the skin, helping it retain moisture, eliminating patches of dry skin, and relieving inflammatory conditions, such as rosacea, psoriasis, and eczema.

Many people use this oil on their hair and scalp, as it can help strengthen weak hair strands and promote the health of hair follicles. It can reduce the levels of certain chemicals that accumulate in the scalp in response to testosterone, which can slow hair growth and even lead to hair loss. Rubbing this oil into the scalp will also reduce inflammatory conditions on the scalp, such as dandruff.

Packed with antioxidants, apricot kernel oil can reduce oxidative stress in the skin, which is good news for people who are suffering from premature aging or have wrinkles, says a study published by researchers from the Centre of Excellence for Pharmaceutical Sciences, North-West University, South Africa in the Molecules Journal. These antioxidants can help to tighten and tone the skin, reducing the appearance of age spots and preventing cellular mutation, which can lead to skin cancer.

It can be difficult to eliminate acne, but suppressing the symptoms is often the first step. Applying apricot kernel oil to the site of an acne flare-up can reduce inflammation and prevent the buildup of sebum in the glands, treating both the symptoms and the underlying problem.

In very small amounts, some natural healers recommend the use of apricot kernel oil to relieve respiratory distress. Small amounts can be consumed to treat this area of the body, or you can add some of this oil to aromatic diffusers to help relieve inflammation in the respiratory tracts.

If you are suffering from chronic pain and inflammation from a condition like arthritis or gout, topically applying this oil to the area of discomfort can quickly soothe pain and reduce swelling and redness.

This specialized oil has become quite popular in recent years and has gained a lot of attention due to its many applications, including topical use, cosmetic products, biodiesel production, and as a hair mask, among others.

You will often find this oil blended into natural cosmetics, including moisturizers, exfoliators and face masks, as this can directly impact the health and appearance of your facial skin.

When this oil is blended with other carrier oils, it can be made into a hair mask and applied directly to your scalp and locks. This should only be allowed to sit on the scalp for 15-20 minutes before gently washing out with warm water.

There are many topical uses of apricot kernel oil, on the temples for headaches, sore joints and muscles for inflammation, and the improvement of skin conditions on various parts of the body.

Some research has been done on the oil’s potential use as biodiesel, considering it has very low oxidation rates, and could soon become a specialized, sustainable fuel source.