While the name black fungus may not sound particularly healthy, these mushrooms do have a surprisingly large number of health benefits!

What is Black Fungus?

Black fungus mushrooms (Auricularia auricula) have been a staple of traditional Chinese medicine for centuries. The genus Auricularia comprises 10–15 recognized species worldwide, many of which look similar to each other. Black fungus are also commonly known as wood ear, due to their resemblance to a human ear, these dark black and brown fungi have a chewy texture when fresh, and a very hard texture when dry. They are known to be used quite commonly in both Chinese and Japanese cuisine. The taste is comparative to an oyster or shiitake mushrooms. They are closely related to cloud ear mushrooms (Auricularia polytricha) and jelly ear fungus (Auricularia auricula-judae). [1] [2] [3] 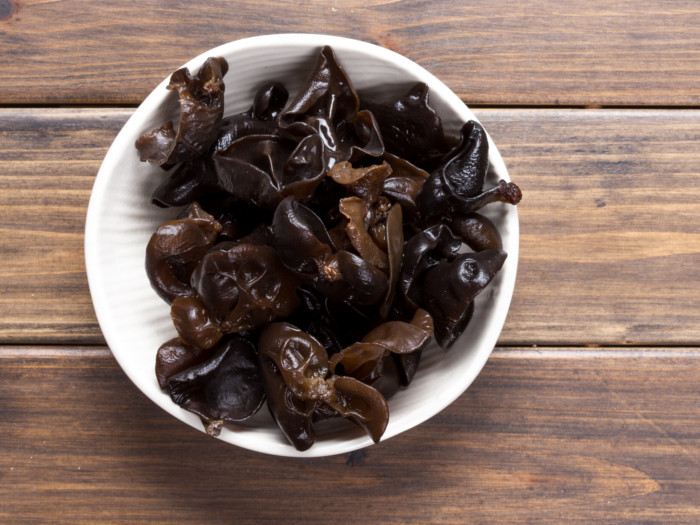 Black fungus is known for its chewy texture and is used in Asian soups and salads. Photo Credit: Shutterstock

There can be many impressive benefits of black fungus, which may include its plausibly positive effects on blood circulation, heart health, and chronic disease, among others.

Black fungus is known for its possibly high iron content and is a popular potential remedy for relieving symptoms of anemia. It is considered to be rich in iron, protein, vitamins, and polysaccharides. The terpenoids in this fungus are thought to help allergy sufferers by preventing antigen activity.

The possibly high polysaccharide content in these types of mushrooms has several medical benefits. It prevents inflammation, which may be particularly in mucous tissue, and can inhibit a key enzyme that may be responsible for Alzheimer’s disease. [4]

Polysaccharides found in this type of fungus can lower blood cholesterol and triglycerides. They may also inhibit platelet clumping, acting as a possible anticoagulant, which may regulate blood viscosity and might reduce the risk of heart disease or stroke. This fungus can be used to provide relief from hypertension, blood clots, and thrombosis. [5] [6]

Vitamin B2 in black fungus can act as a powerful antioxidant, potentially protecting cells from free radicals and thus perhaps reducing the risk of chronic diseases. It can also have a possibly beneficial effect on physical stress and may support a healthy immune system.

May Detoxify the Body

This fungus can act as a detoxifier often paired with foods that might have slight toxic qualities, to possibly reduce the impact of pesticides or heavy metal residue. This type of fungus is thought to pull impurities from the lungs and digestive system, as well as possibly counteract the effects of radiation and chemotherapy.

The pectin and dietary fiber in this culinary fungus are thought to help prevent obesity and encourage weight loss by discouraging fat absorption.

Black fungus should be consumed with caution if you have the following health conditions.