While you may have never tried Calvados, it is certainly a beneficial type of alcohol that should be enjoyed if you ever make it to France!

Calvados is a popular type of apple brandy from the Normandy region of France, which must be aged for at least two years in barrels to earn this distinction. It differs from cognac in that it is made with apples instead of grapes. Calvados gained popularity at the end of the 19th century when disease ravaged the vineyards of France but fortunately spared the apple orchards. Traditionally made from a mix of over 200 different apple varieties, good calvados taste bittersweet, with subtle notes of spice. The alcohol content is usually 40%, and a 1.5-oz serving contains approximately 13 grams of carbs. [1]

The recommended way to serve this alcohol is to pour the drink into a traditional balloon glass, then let it sit for 15-20 minutes to let the aromas release. This will further improve the flavor. 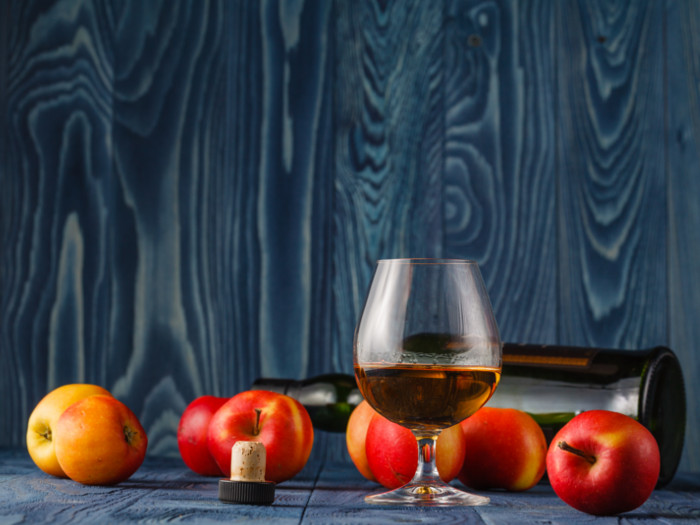 Calvados is an alcoholic drink made from distilling cider in Normandy. Photo Credit: Shutterstock

Calvados has some health benefits, including the following:

However, the scientific evidence to back these health claims is weak. Large-scale clinical trials are needed to examine the risks and benefits of moderate alcohol intake.

This specialty alcohol is used as a flavoring agent in many French recipes. If you cannot get a bottle of the original liquor, several substitutions are available. To keep the deep liquor flavor of the brandy, try using the following: [4]

If you want to keep your recipe non-alcoholic, you can choose the following:

Word of Caution: Moderation is key. The risks involved with drinking excessive alcohol can be short term such as violence and injuries to long-term health risks such as chronic diseases. Also, cooking with alcoholic beverages results in only some loss of alcohol content. Foods baked or simmered in alcohol can retain anywhere from 4 percent to 85 percent of the alcohol, according to a study by the U.S. Department of Agriculture’s Nutrient Data lab. [5] [6]