The interesting health benefits of brandy may include its ability to slow the signs of aging, control weight, reduce respiratory issues, boost heart health, improve sleep patterns, and strengthen the immune system.

Brandy is a strong alcoholic spirit made from fermented fruit juice or distilled wine. Brandy is derived from wine, yet it is aged in oak barrels, which increases the alcohol content and also gives it a unique color. This form of liquor has typically 30-60% alcohol by volume, which can pack quite a punch when drunk in excess. [1]

The name comes from the Dutch word ‘brandewijn’ and is made by further distilling wine to increase the alcoholic content. Other common names of brandy are Applejack, Armagnac, and Cognac. It comes in many varieties, based on different fruits. However, it is usually enjoyed as an after-dinner drink and not as something that one drinks all evening, as some may do with wine or beer at a party. [2] 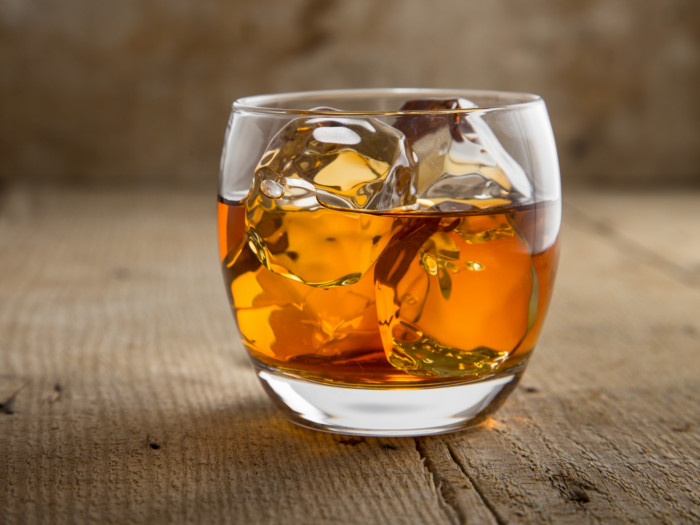 A scintillating glass of brandy with ice Photo Credit: Shutterstock

As with any type of alcohol, drinking an excessive amount can also be bad for the heart, so caution should always be taken when monitoring consumption. Brandy in moderation should be enjoyed as an experience rather than a health tonic. Let’s take a closer look at the important health benefits of brandy when consumed in moderation:

Traditionally, brandy, because of its anti-inflammatory properties, may have been used as an effective means to relieve respiratory issues, such as a cough or a sore throat. The strong alcoholic content can prove to be helpful in eliminating bacteria and loosening up phlegm and mucus, thereby acting as an expectorant. [5]

A comparative study published by the British Journal of the Diseases of the Chest [6] also suggests that intake of brandy instead of beer, wine, or whiskey can also help improve the symptoms of asthma.

Brandy is a popular and delicious liquor that can potentially offer a boost to the immune system. For hundreds of years, it has been relied on as a solution for a common cold or flu. It has natural warming properties mixed with relaxing quality that induces healthy sleep. It is also antibacterial.

A nightcap to aid a good night’s sleep every once in a while is considered traditional in many cultures and many parts of the world. While for some a small volume of whiskey could do the job, brandy for sleep is also considered a favorable option. While there is no doubt that brandy can knock you out quickly, remember it is not a solution.

According to the National Sleep Foundation [7], alcohol does have a sedative effect on the body and can put you into a deep sleep state quickly. However, it does no favors when it comes to the second half and can wake you up before you can complete proper sleep. While there is no harm with an occasional nightcap (a very small amount), know that alcohol is not a solution for sleep disorders.

Can Aid In Improving Heart Health

The journal, Food Chemistry, has published a study in 2009 concluding that brandy may have antioxidant properties. When consumed in moderation, this antioxidant potential of brandy can help reduce the amount of negative cholesterol in the heart. This helps to balance out cholesterol levels and reduce plaque build-up. Furthermore, the polyphenolic compounds in it might also significantly reduce inflammation in the cardiovascular system, which eases tension in the blood vessels and lowers blood pressure, preventing heart attack and stroke. [8]

The antioxidant compounds found in brandy may help prevent certain types of aging symptoms, including wrinkles on the skin, cognitive issues, poor vision, and other chronic conditions that occur as we age. These compounds are attributed to the presence of copper in the aging barrels, which can have a strong effect on the body. Antioxidants help prevent cellular death in the skin, hair, brain, and internal organs, due to dangerous free radicals.

According to Dr. Gordon Troup and his team from Monash University in Melbourne, Australia, a shot of brandy may consist of the same antioxidant potential as 90 mg of vitamin C, which is known for its anti-aging properties. These health benefits are said to be derived from the copper used during distillation, which only gets enhanced with the quality of the brandy. [9]

Unlike carbohydrate-heavy alcoholic drinks like beer, brandy may contain no carbs at all and doesn’t fill you up. It can also be enjoyed as an aperitif, without ruining your appetite. Moreover, it may also not contribute to the simple sugar breakdown of carbs that can easily be stored as fat, such as those found in beer. [10]

Side Effects of Brandy

As mentioned earlier, alcohol of any kind should only be consumed in moderation. Alcoholism and binge drinking is detrimental to your overall health and can undo any possible good things that moderate amounts can impart. Excess intake or addiction can cause various side effects as follows:

Always consume brandy in moderation, but consult your doctor before adding it to your regular diet, especially if you have experienced liver problems in the past, or if you have a history of addictive behavior.

You can consume brandy neat or on the rocks. However, it can be used in various ways including cooking, as follows:

Word of Caution: Cooking with alcoholic beverages results in only some loss of alcohol content. Foods baked or simmered in alcohol can retain anywhere from 4 percent to 85 percent of the alcohol, according to a study by the U.S. Department of Agriculture’s Nutrient Data Lab. [14]

How to Drink Brandy?

Brandy can be consumed in any manner you see fit, but the popular way is to:

Brandy is not a type of whiskey but many people may mistake it for whiskey, due to the similar burning sensation of drinking it. It is primarily made from wine and fermented fruit juices, whereas whiskey is a spirit made from types of grains, such as wheat, corn, or malted barley.