The health benefits of canola oil include its ability to improve heart health, lower cholesterol levels, strengthen cell membranes, boost energy levels, keep the brain functioning at a high level, and prevent the onset of diabetes. This oil also promotes skin and hair health. It may also reduce the risk of cancer.

What is Canola Oil?

Canola oil is a type of edible cooking oil that most commonly comes from varieties of the rapeseed plant. It comes from certain varieties of mustard seed and is produced by genetic modification. This is also the reason why there is still some concern surrounding the use of this oil as it may be toxic. Canola oil is known in certain areas of the world as rapeseed oil and typically comes in two varieties, Rapeseed 00 and Double Zero Rapeseed. The name rapeseed (canola) is derived from the Latin root rapum, which means turnip. Turnips, cabbage, rutabaga, and other similar plants are closely related to the two common cultivars of this oil, which are most widely produced and used today. It has been used as a fuel for thousands of years by various cultures throughout history. [1] 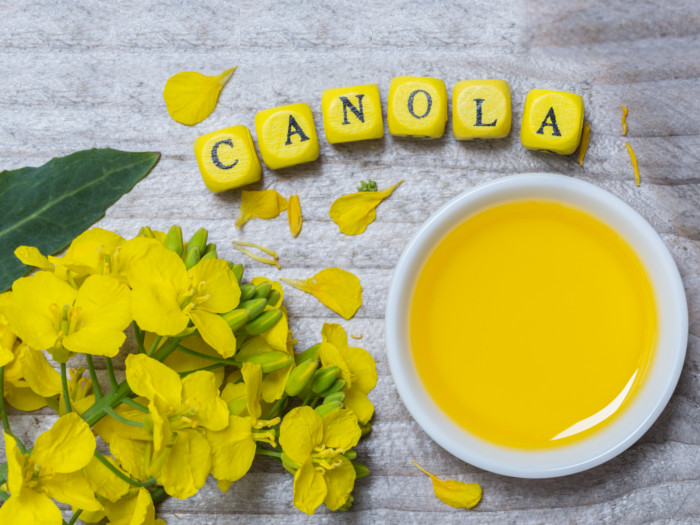 Canola oil has a medium-high smoke point of 400 degrees F, which makes it perfect for cooking, baking, and stir-frying. This oil can also be used for drizzling over food where the flavor is required.

Health benefits of canola oil include:

Canola oil contains both omega-3 fatty acids and omega-6 fatty acids in the ratio of 2:1. This is one of the healthiest ratios of any vegetable oil, even healthier than olive oil. Sterols, which have powerful cholesterol-lowering properties, are also found in rich supply in canola oil. The phytosterols that are found in this oil can actually reduce the creation and absorption of cholesterol that you may get from other foods. Therefore, not only does canola oil contain no cholesterol, it can actually reduce your cholesterol levels by 10-15%. [4]

Omega-3 fatty acids and omega-6 fatty acids are present in canola oil and those are often considered good and bad cholesterol, respectively. The body needs both, even though one is considered unhealthy. The ratio is 2:1, which is one of the healthiest ratios of any vegetable oil, even healthier than olive oil. Sterols are also found in rich supply in canola oil. The phytosterols that are found in canola oil can actually reduce the creation and absorption of cholesterol that you may get from other foods. Therefore, not only does canola oil contain no cholesterol, it can actually reduce your cholesterol levels by 10-15%. [5]

Canola oil, like many vegetable oils, is rich in vitamin E, which is an essential vitamin for the body for various reasons. Vitamin E is very effective as an antioxidant and is able to protect the skin from the damaging effects of free radicals. This can keep your skin supple and smooth, increase the healing rate of injuries, reduce the appearance of blemishes, wrinkles, and acne marks. [6]

Free radicals, which vitamin E can neutralize, are some of the most dangerous components in the body that affect the appearance of the skin, so canola oil is a logical choice if you want to look young and beautiful well into your old age.

Vitamin E is also a lipid-soluble antioxidant, meaning that it can help protect the integrity of cell membranes throughout the body. Mucous membranes are important for protecting our body from foreign substances and form an important part of our immune system. [7]

The low amount of cholesterol and the high amount of important antioxidants can help the body’s metabolism move at a normal rate. Your body doesn’t become sluggish and your energy isn’t sapped by the slow circulation or an overstressed cardiovascular system. [8]

Extensive research on canola oil has shown that it is one of the healthiest edible vegetable oils as far as its biological functions and its potential to help in lowering disease-related risk factors and improving health is concerned. A 2013 research published by a team of researchers from the USA and Canada in the Nutrition Review journal suggests that canola oil consumption may lower the progression of cancer. However, more studies are required to better delineate the role of canola oil on cancer prevention. [9]

Cognitive function declines as we age, manifested in conditions like Alzheimer’s disease and dementia. The antioxidants that combat free radicals also prevent damage to the brain, which can shut down neural connections and lead to these conditions. [10]

Monounsaturated fats not only help prevent heart disease, but they can also help maintain glucose levels in the blood. This means that the chances of developing diabetes are fewer since glucose levels are in balance. The metabolism of the body keeps glucose and insulin levels in line, so if you have diabetes, you are less likely to suffer from spikes and drops in blood sugar that are so dangerous to people with diabetes. [11]

This oil prevents aching joints and stiffening of bones as a result of old age and wear-and-tear. It is also good for the treatment of arthritis, and other inflammations caused by respiratory or digestive disorders.

Canola oil is famous for its use as a hair moisturizer, as it helps prevent dandruff, gives shine to your hair, and promotes hair growth.

The main difference between canola oil and vegetable oil is the type of plants that they are derived from. While canola is derived from the rapeseed plant that is related to mustard and cabbage family, vegetable oil is much similar to soybean oil, in the sense that it may contain soybean, safflower, or corn oil.

There are many uses of canola oil.

There have been many side effects of canola oil. Let’s discuss them in detail below.

Speak to your medical professional before switching anything in your diet and be sure that the benefits of canola oil are what you are seeking in your healthy eating choices.

Rate this article
Average rating 3.9 out of 5.0 based on 128 user(s).
Read This Next:
Popular Articles