There are two types of milk proteins you will often find in health stores, casein and whey. Both of these come from milk, often obtained as a by-product of cheese production. But you are more likely to get them in health stores and supplement shelves than a dairy or among milk-based products. This is because both of these are rich sources of protein. Commercially produced casein and whey are in high demand among fitness enthusiasts who see it as a time-tested protein supplement. If you are planning to buy either, it is important to do an assessment of casein Vs whey.

While both may be derived from milk and share a similar method of production, they are very different with distinct properties. Let us first understand how they are formed.

Whey: Whey is the liquid left after milk has curdled. It is produced as a byproduct of making cheese, yogurt, or casein. It tastes similar to yogurt with a slightly sour and creamy flavor. There are two types of whey:

Casein: Casein is one of the major proteins in milk. It is also present in cheese. While pure casein is tasteless and odorless, commercial casein has a slightly yellow color with a pleasant aroma. It is made from skimmed milk. There are three ways of making casein. Acid casein is made by acidifying the milk with organic or mineral acids. Rennet casein is made by adding rennet. It is also made by adding dilute sulfuric acid or hydrochloric acid. [1]

Casein is present in almost all dairy products, including milk, butter, and cheese. We extract it from milk during the cheesemaking process. While whey is also obtained during similar processes, it is the liquid that is left behind. The liquid is dried to make the powdered whey, while the casein curds are dried to make powdered casein. [2] 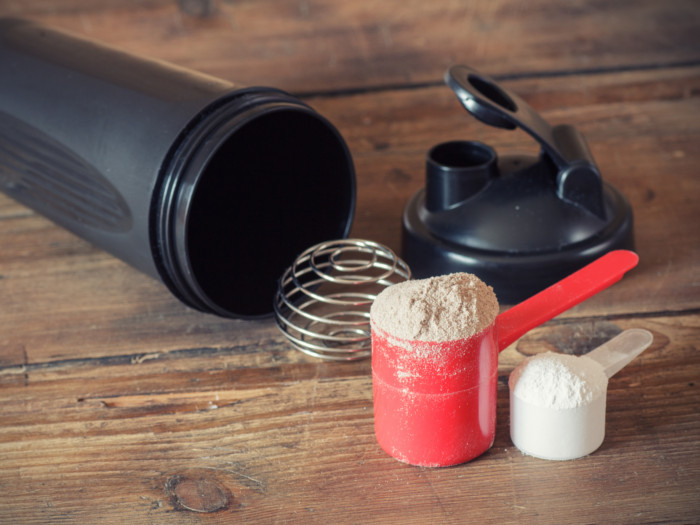 Whey Vs Casein: which will be your choice? Photo Credit: Shutterstock

While casein and whey have their importance in dairy and cheese production, their main commercial role is as a protein supplement. These are the two main proteins present in milk, but their proportions can carry. While cow’s milk contains 80 percent whey and 20 percent casein, in human milk this proportion is 70:30. Both casein and whey are high-quality proteins, full of amino acids that our body needs. They are also usually easily digestible. In a direct contest, whey edges out because it contains a higher count of essential amino acids.

Which is Better for Muscle Building?

Whey is often seen as the preferred choice for bodybuilders. It is cheaper and many people prefer its flavor when compared to casein. Whey is more quickly absorbed by the body. It contains a higher number of amino acids and has branched-chain amino acids or BCAAs. In particular, it has leucine, a compound that reduces muscle fatigue and promotes protein synthesis. [3]

However, if it is a question of athletic performance, casein is just as beneficial. In fact, an eight-week-long study on female athletes, published in the Journal of Sports Science and Medicine found unremarkable differences in the protein consumption and overall gain in performance during conditioning and resistance training program. [4]

It should be noted that both whey and casein may be unsuitable for people who are lactose intolerant.

You can take them with milk or water. Whey is more soluble than casein and will easily blend. Some people prefer using the blender, especially for casein, for a more homogenous mix. Both whey and casein powders have a pleasant taste that goes well with milk. They thicken the milk, making it similar to a milkshake. You can also get them in different flavors, such as chocolate, vanilla, and strawberry.