What is Cassava Flour

Cassava flour is becoming increasingly popular around the world as a gluten-free flour option, but there are a number of things you should know about the nutrition and potential health effects of this flour variety.

What is Cassava Flour?

Cassava flour is a wheat-free flour made from peeled, dried, and ground cassava root, from the cassava plant, scientifically known as Manihot esculenta. This flour has been produced and used widely by native people in South America and others around the world as a nutrient-dense flour alternative to wheat. The plant is also known as yuca and manioc in some cultures. [1]

There has been some concern that cassava flour is toxic, given the cyanide-like compounds found in the root, but these are only dangerous when the root is eaten raw. As for the question of whether this flour is a viable gluten-free option, it most definitely is and is also becoming more and more popular around the world, because it is known to have the closest consistency to wheat flour for those who need to avoid gluten. [2] 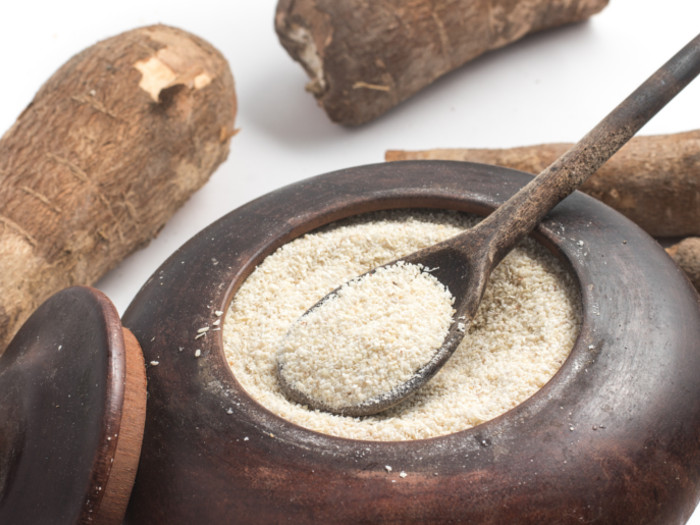 Cassava flour is an exciting flour alternative for those of us who avoid gluten and grains. Photo Credit: Shutterstock

In terms of nutrition, this flour is dense, but also has a very high level of carbohydrates. A 1/2 cup serving of this flour delivers more than 220 calories, 4 grams of fiber, and 56 grams of carbohydrates. It also delivers a significant amount of magnesium, vitamin C, vitamin B6, and potassium. While low in fat, it is also quite low in protein. In some countries, cassava flour is praised for its high-calorie count, but for those watching their sugar intake, moderation is needed when dealing with this flour. [4]

The top benefits of this flour include its ability to do the following: [5]

Furthermore, studies have shown that cassava flour is easier to digest and can improve gut health in those who regularly consume it. Due to the high carbohydrate level, it delivers a solid energetic burst to your metabolism. [6]

How to Make Cassava Flour?

Making cassava flour is a time-intensive process, but definitely possible.

How to Use Cassava Flour?

This flour can basically be used in the same way as any other flour in your diet, particularly if you are gluten-free. The most popular uses include the following:

This flour is known as the closest replacement for the consistency of normal wheat flour.

Cassava flour is made from the peeled, dried, and ground cassava root, while tapioca flour is made through a process of pressing, pulping, and squeezing of the same root. Arrowroot, on the other hand, may contain both tapioca flour and cassava flour, but it is a combination, and may also include powdered flour from other root vegetables, such as Florida arrowroot and West Indian arrowroot. [9]

Rate this article
Average rating 3.7 out of 5.0 based on 9 user(s).
Read This Next:
Popular Articles