Using Celtic sea salt in your recipes not only adds a unique flair to a dish but can also provide a number of surprising health benefits. It can help heal skin damage, promote healthy cell growth, and relieve joint pain. Many people now use natural varieties of salt like Himalayan sea salt, Celtic sea salt, and Fleur de sel, among others because they offer powerful health benefits.

Celtic sea salt is a type of salt harvested from the Celtic Sea off the coast of France. Sea salt is traditionally harvested by evaporation and sun drying. It retains more moisture than refined table salt and has a slightly moist feel. Sea salt can also be darker and tinted gray, instead of the usual white or pink that is found in other salts. This is because of the high mineral content that is retained in the salt as it is evaporated. Sea salt is prized therefore as a good source of not only iodine, but lots of trace essential minerals, including magnesium, iron, manganese, zinc, iodine, and potassium. [1]

Though this sea salt is specifically limited to the western coast of France, much of the sea salt sold under the brand name Celtic Sea Salt is harvested in many different parts of the world. 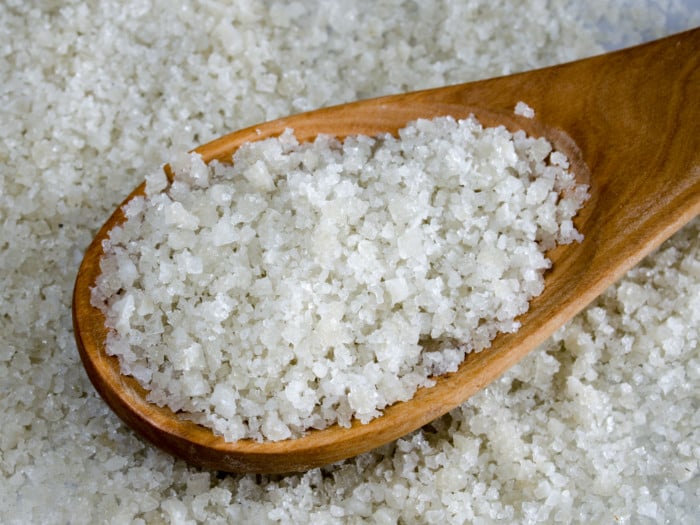 Many people prefer the flavor of sea salt, which has its own distinct character depending on where in the world it is harvested and that area’s particular geological composition. Crunchy sea salt flakes are particularly prized for their use in baking and presentations. Celtic sea salt is very strong, with a flaky sharp texture that gives a shot of salty flavor.

However, it has also been used for centuries for a number of health benefits.

Celtic sea salt is a popular soak or washes for damaged or broken skin. It is also recommended as an exfoliant. The salt itself acts as a disinfectant, while the trace essential minerals act as a balm to the injured skin, bringing down any inflammation. Salt washes are recommended for rashes, acne, and rosacea. Repeated treatment can, however, be very drying to the sensitive skin, so using a moisturizing cream immediately after is recommended. [2]

Celtic sea salt contains 92 trace essential minerals. Twenty-four of those minerals are considered absolutely essential to many basic bodily functions. Deficiencies can lead to symptoms like muscle spasms, nervous system disorder, and brain damage. Sea salt is also more conducive to letting fluid move easily from the bloodstream and throughout the body. Regular table salt can lead to a buildup in the fluid around joints and potentially edema or kidney issues.

Celtic sea salt is a great dehydrator and can help reduce swelling in the nose and sinuses, as well as any mucus build-up in the lungs. It is also recommended to treat water retention and fluid build-up in joints.

Recently, researchers found that soaking in a high-salt bath, with 25% salinity or higher, helps relieve inflammation around swollen joints from osteoarthritis. Low-salt solutions may actually aggravate areas of inflammation, but high salt content dehydrates the cells around the swollen area, bringing down the inflammation. [3]

Iodine is a chemical that your body doesn’t produce naturally, but iodine is essential for hormone regulation within the body. The thyroid gland uses iodine in the production of hormones. A common sign of iodine deficiency is a goiter on the thyroid. In a study by Dr. Guy E. Abraham, it was found that vitamin C is able to more effectively transport iodine in the body, making Celtic sea salt an effective means of preventing iodine deficiencies. These types of deficiency can also lead to infertility, and some studies suggest that it is a high-risk factor for certain types of cancer. While many salts add iodine, Celtic sea salt is a natural source of this crucial element. [4] [5]

Side Effects of Celtic Sea Salt

There is evidence that too much sodium can lead to hypertension (high blood pressure) and is bad for cardiovascular health. However, moderate to low levels of sodium are safe. The recommended upper limit of daily sodium consumption for an adult is 2,300mg [7]. For people with a history of heart disease, or for those who are at high risk for heart disease, the maximum limit is considered 1,500mg a day. Because of rising levels of mercury, lead, and other heavy metals in the oceans today, it is critically important to know where your sea salt is harvested.

Rate this article
Average rating 4.1 out of 5.0 based on 29 user(s).
Read This Next:
Popular Articles