Sodium is an extremely important electrolyte and an essential ion present in the extracellular fluid (ECF). One of the health benefits of sodium is the pivotal role it plays in enzyme operations and muscle contraction. It is very important for osmoregulation and fluid maintenance within the human body. Other health benefits include improved heart performance, nervous system, and glucose absorption.

What is the Importance of Sodium?

Sodium is needed for blood regulation and its absence can cause serious impairment of bodily functions. It is a versatile element and occurs in more than eighty different forms. As an electrolyte, it regulates the bodily fluids and transmits electrical impulses in the body. Unlike other vitamins and minerals, heat has no effect on it. Therefore, it can be used in different ways and preparations without losing its effects. Also, it is an important constituent of nerves and helps to regulate muscle contractions. [1]

Although sodium is an essential nutrient in any balanced diet, excess sodium levels are linked to increased risk of stomach cancer and hypertension. People suffering from kidney problems or edema should restrict their intake to protect against those health risks. In short, it is a vital component in the human diet for the regulation of cellular activity and nervous system function.  Supplemental doses of this nutrient are necessary when you sweat profusely, have sunstroke or suffer from adrenal insufficiency. It is regularly excreted in the urine and poses no inherent toxicity or risk.

The recommended intake of sodium is 2400mg/day. If you do not supply your body with enough sodium, the deficiency symptoms can range from irritating to fatal. One of the most seriously impacted areas of the body is the nervous system, which will begin to shut down. In general, its deficiency leads to diarrhea, vomiting, headache, weakness, low blood pressure, lethargy, weight loss, confusion, dizziness, and muscular irritability.

While the deficiency of sodium is dangerous, excess levels can also cause high blood pressure, swelling of the neural tissues and nerves, and cerebral edema. If the situation is not alleviated, it can even lead to a coma.

Reduction in the amount of sodium also reduces the fat accumulated in the peripheral parts of the body. Furthermore, excess sodium elevates the chances of lung infection. Depletion of the level of sodium is an invitation to a host of diseases that can cause exhaustion, exertion, and mental apathy. 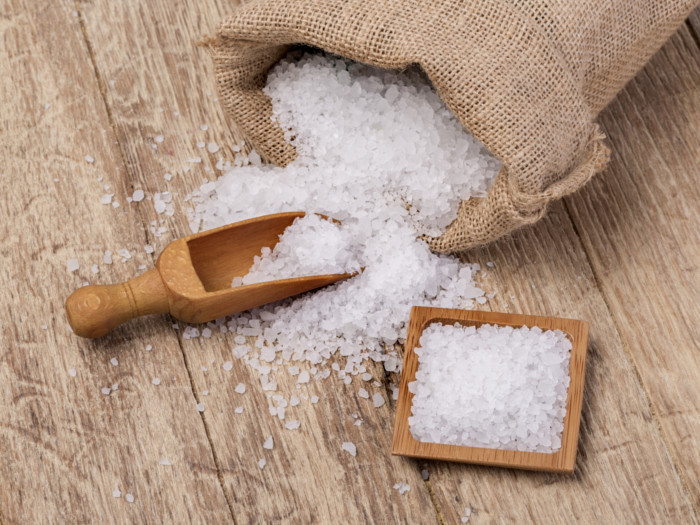 Salt, in chemistry, substance produced by the reaction of an acid with a base. Photo Credit: Shutterstock

Sodium is generally present in very small quantities in nearly every natural food. When it is added in the form of a common salt, it not only increases the flavor but also completes the necessary requirement of a balanced diet. The health benefits include:

Sodium is one of the minerals that helps to regulate fluid levels in the human body. Sodium and water balance are closely linked. Sodium gateways and channels are what pump water into the cell and regulate the amount of extracellular fluid in the body.

It is caused due to the failure of the heat regulating system in the human body. This form of heat exhaustion is caused due to continuous exposure to very high temperatures. This exposure causes the body to lose its capacity to maintain a normal temperature. This condition is further aggravated due to the loss of salt and water from the body. Thus, sodium plays a vital role in preventing sunstroke or heat exhaustion by replacing the loss of essential electrolytes. Besides water, drinking fluids containing salt and sugar is favorable against sunstroke. Salt can also be mixed with the juice of raw mangos to provide even more relief. Sodium levels and fluid balance are very important for endurance athletes as well as those who live extremely active lifestyles.

The brain is very sensitive to change in sodium levels of the body; deficiency of sodium often manifests as confusion and lethargy. It aids in keeping the mind sharp, and it is an important element for the development of the brain since it works to improve brain function.

These are caused mostly during the hot summer months due to electrolyte imbalance and dehydration. Along with properly hydrating the body, it is also important to supplement one’s body with sodium-rich juices and fluids to restore a number of electrolytes.

Sodium is an important hydrating product in many anti-aging creams. It defends against the free radicals that accelerate the aging process. Furthermore, it helps to restore youthful and healthy skin.

Sodium plays an important role in the removal of any excess carbon dioxide that has accumulated in the body.

Sodium helps to facilitate the absorption of glucose by cells, resulting in the smooth transportation of nutrients in the body’s cell membranes.

By altering the proportions of acid-base alkali phosphates in the body, sodium controls the reaction of the kidneys and the frequency and content of urination.

One of the most notable health benefits of sodium is its ability to balance the osmotic pressure in the human body due to the regulation of fluid in the body’s cells.

Sodium shares an association with chlorides and bicarbonates in maintaining a sound balance between two types of ions, both positively charged ions, and negatively charged ones.

Sodium can help to maintain normal contractions of the heart. It plays a vital role in maintaining the blood pressure of the human body, but an excessive increase in its content can dramatically boost the blood pressure and result in serious health complications.

Rate this article
Average rating 4.2 out of 5.0 based on 126 user(s).
Read This Next:
Popular Articles