Around the world, people have often turned to cherry juice for gout, as it is known to reduce the symptoms and underlying factors that contribute to this condition.

Gout is a form of inflammatory arthritis in which an excess of uric acid is present in the body, causing small, crystal-like formations in the joints, which can be extremely painful. While there are certain pharmaceutical drugs that can counter the symptoms of gout, many people instead turn to traditional remedies and changes in their diet, considering that uric acid levels are highly influenced by what you eat – namely rich, sugary and high-fat foods. One of the most trusted remedies for gout, however, comes from an unexpected source – cherry juice! [1]

The use of cherry juice for gout is a relatively new remedy, as the beneficial effects of this fruit were only connected to gout in the 20th century. 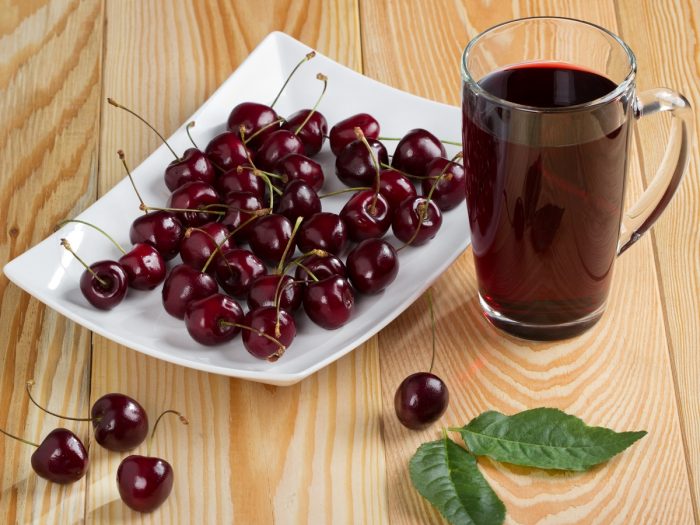 Different cherry varieties are generally rich in certain minerals and vitamins, many of which can help to prevent inflammation, but the organic compounds and antioxidants found in cherries are where the real benefits occur.In particular, tart cherries or sour cherries are rich in anthocyanin, which are powerful components that can effectively block pro-inflammatory compounds in the body. [2]

There are also certain bioflavonoids that can help to lower overall uric acid levels in the body by improving the function of the kidneys. When the kidneys are working better, they process purines more effectively, release less uric acid into the bloodstream, and thereby reduce the chance of those crystals clumping and forming painful growths at various joints or extremities. By further blocking the pro-inflammatory compounds that the body releases when it detects a foreign substance or growth (e.g., a clump of crystals), it can reduce the pain and discomfort of this condition. Essentially, if your joints don’t swell up, the uric acid crystals will experience less pressure and friction in the joint. [3]

Tart cherry juice is also widely used as a diuretic, which further factors into the effect that this juice can have on gout. By stimulating urination, cherry juice can help to eliminate excess water, salts, fats and toxins from the body, which can improve the functioning of the kidney and further reduce uric acid deposition in the blood. While sweet cherry juice is more pleasant to drink, it doesn’t have as many anthocyanins or bioflavonoids as tart cherry juice. [4]

That being said, the tart cherry juice is also extremely sour, and may not be pleasant to drink in its pure form. Making tart cherry juice more drinkable, without adding more sugar to the beverage can be difficult. High concentrations of sugar – such as in the alcohol during a long night of drinking – can exacerbate gout symptoms. Some of the most common solutions for the powerful flavor of tart cherry juice is mixing it with green tea or sparkling water. Using black cherries can also be a solution, as the flavor is much more palatable, and its nutrient profile lies somewhere between sweet cherries and tart cherries. [5]

While cherry juice for gout appears to be an excellent remedy, there are some potential side effects involved, as tart cherry juice can lead to weight gain and gastrointestinal problems.

Considering that a single glass of cherry juice contains an average of 140 calories, those who are drinking cherry juice in excess to relieve gout symptoms may be compromising their calorie limits for the day, which can lead to weight gain. Unfortunately, obesity is often a precursor to symptoms of gout, so drink this juice in moderation. [6]

Cherry juice has a high level of sorbitol, which is a sugar alcohol that can have a strong effect on digestion. In excess, the sorbitol found in cherry juice can lead to diarrhea and other gastrointestinal problems, including cramping, bloating and indigestion. [7]

Rate this article
Average rating 4.0 out of 5.0 based on 145 user(s).
Read This Next:
Popular Articles