Drinking sparkling water is a bubbly and delicious way to rehydrate, but many people still wonder if it is any better than regular drinking water.

What is Sparkling Water?

Sparkling water is the flashy name for carbonated water – water into which carbon dioxide has been dissolved under pressure. This process gives the water a fizzy or bubbly sensation when it is drunk, similar to soda and other carbonated beverages. In some parts of the world, carbonated water is extremely popular, and it does come in a number of forms and has various names, such as seltzer water, bubbly water, fizzy water, soda water or club soda, among others. This type of water was artificially created hundreds of years ago and has continued to evolve and fascinate palates around the world. 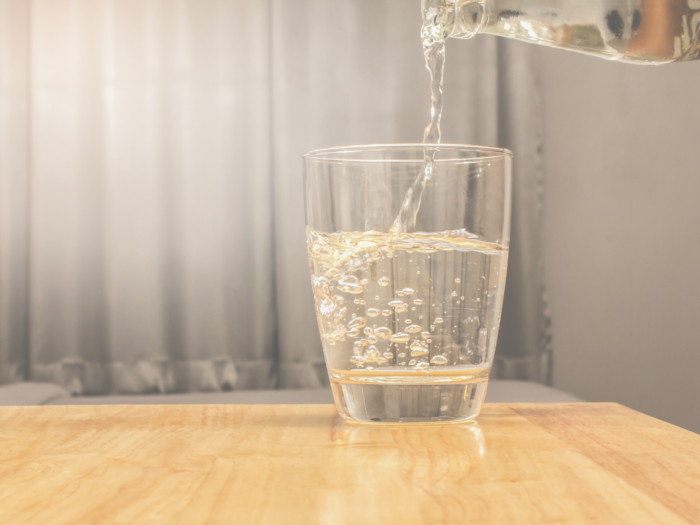 In terms of sparkling water versus regular water, there are a few benefits to the carbonated version, such as its effects on indigestion and the energetic sensation that some people describe. Aside from that, it also shares all the normal benefits of water, namely hydration! It is important to note that not all sparkling waters are pure mixtures of carbon dioxide and water; be sure to look for other chemicals or additives, such as those commonly added to club soda or tonic water. [1]

The most important benefits of this carbon dioxide-infused water include relieving constipation and indigestion, weight loss, helping to maintain blood sugar, preventing motion sickness, preventing toxicity, and reducing weight, among others.

Anecdotal evidence from all around the world points to carbonated water’s effects on indigestion. It is known to settle the stomach and induce burping or flatulence, which can often reduce pressure in the gut and prevent reflux disease symptoms. [3]

Some people have reported that sparkling water is great for constipation, easing the passage of bowel movements, and reducing pressure and inflammation in the gut. [4]

One of the biggest reasons why people take up drinking sparkling water is to get away from drinking sugar-rich sodas and carbonated beverages. The bubbles of sparkling water can give the impression of drinking a soda, but without the sugar, which helps people who are struggling with diabetes or are at high risk of developing the condition. [5]

When you eliminate beverages that are high in sugar, you also reduce your overall calorie intake. If you regularly drink a few sodas a day, switching to calorie-free sparkling water can lead to a calorie deficit and weight loss over time. [6]

Although the exact reason for this isn’t clear, many people claim that drinking bubbly water can help reduce feelings of nausea and motion sickness. [7]

Drinking tap water is good for you, provided you know that it is fully filtered and free of toxins. If you choose to drink sparkling water instead, it is almost guaranteed that the water was processed and treated before being carbonated, so you reduce your risk of toxicity from tap water.

Like all forms of water, carbonated water provides hydration for the body, so all metabolic processes can be carried out smoothly and efficiently. [8]

How to Make Sparkling Water?

For many years, carbonated water was something that could only be manufactured, and rarely produced at home, but with at-home soda machines, this has all changed. If you are an at-home chemistry whiz, there are ways to pressurize carbon dioxide and dissolve it in water, but there are easier and less expensive methods for making this water. Soda “machines” are widely available that can turn regular water into sparkling water in seconds, but the cost of bottled sparkling water is often similar or less than regular bottled water, so very few people make DIY sparkling water.

Difference Between Soda and Sparkling Water

Sparkling water is the common name of carbonated water, but within that classification, there are smaller categories. Tonic water, for example, often has sugar added to it, while soda water or club soda could have sodium or other compounds (e.g., potassium bicarbonate), along with artificial sweeteners or additives. While pure seltzer water tends to be composed solely of water and carbon dioxide, soda water will usually contain additives. Aside from these small differences, which affect taste and calories, they are essentially the same thing. [9]

The side effects of sparkling water come in the form of gas or bloating when drinking in excess. The carbon dioxide in this beverage will often make people feel temporarily bloated, or more prone to burping. There is also the chance that drinking too much sparkling water will make you feel full (due to the bloating), and cause you to drink less water, thus becoming dehydrated. There are some health myths about this water’s effects on the teeth, but they are largely unfounded.

Rate this article
Average rating 3.9 out of 5.0 based on 199 user(s).
Read This Next:
Popular Articles